What Does Edward Snowden’s Move From Moscow Airport Mean? 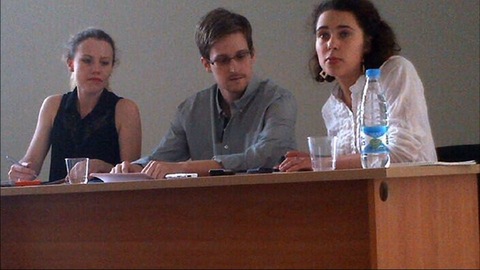 Screen image of Edward Snowden at a meeting with Russian lawyers and activists on July 12.

After 39 days holed up at a Moscow airport, Edward Snowden, the self-professed leaker of National Security Agency top-secret surveillance programs, has officially entered Russia. But it doesn’t mean he has his full freedom.

Stephen Vladeck, a law professor at American University, explained that the one-year asylum granted by the Russian government takes the immediate pressure off of Snowden, but basically freezes the status quo.

“All that it really changes is where he’s living,” said Vladeck. Snowden can’t travel outside of Russia, and traveling within the country also might be restricted. He can’t work, because the government hasn’t issued him a work visa. And there might be other conditions attached to the temporary relief, Vladeck said.

Even though Snowden will be free of the confines of the airport, “I don’t think this will be a year of hanging by the pool,” he added.

The Russian government can revoke the asylum at any time, or conversely, make it permanent. It appears to be a compromise in what is a politically tense situation between Russia and the United States, Vladeck said.

Since June 23, Snowden had been in a diplomatic limbo in the transit zone of the Sheremetyevo International Airport in Moscow awaiting permission to enter a country that wouldn’t send him back to the United States.

The United States charged Snowden with theft of government property and espionage after he revealed to the Guardian newspaper that the NSA has been collecting telephone and Internet data on American citizens and in other countries.

The Guardian published an article on Wednesday about another NSA program, called XKeyscore, that purportedly allows analysts to collect users’ Internet activities from emailing to online chats.

Gen. Keith Alexander, head of the NSA, spoke at the Black Hat cybersecurity conference in Las Vegas on Wednesday in defense of the NSA’s surveillance program. As he described before Congress, Alexander said the programs have disrupted more than 50 “terrorist-related” plots.

Watch his full speech at the Black Hat conference: