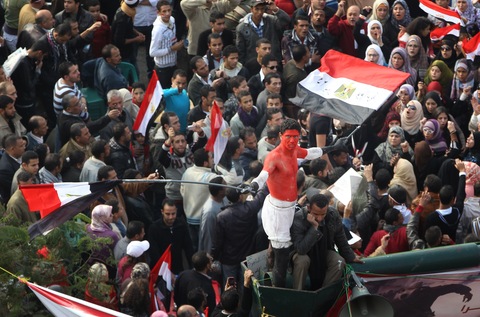 Protester painted in the colors of Egypt’s flag joins thousands of other demonstrators in Cairo’s Tahrir Square on Friday. Photo by Peter Macdiarmid/Getty Images.

Egypt’s election scene, complete with campaign ads on TV and posters and billboards plastered around town, is just like any other country. But little else is similar.

The process of parliamentary elections in Egypt is unique. Elections will be held in three phases, with each phase consisting of two days of voting, starting Monday and Tuesday, instead of just one day as originally planned, the ruling military council said Friday. The move is meant to avoid overcrowding and possible security problems.

In another attempt to appease protesters, the military council on Friday appointed a new interim prime minister, Kamal el-Ganzouri, who held that post under former president Hosni Mubarak. He said he wouldn’t have accepted the appointment if military leaders had intended to stay in power.

Leading up to the elections, tens of thousands of Egyptians congregated in Cairo’s Tahrir Square, demanding an end to the caretaker military rule and a faster transition to a civilian government.

The protests turned violent earlier in the week and put the Monday starting date for the elections in jeopardy. A truce between protesters and police on Thursday brought calm once again to the city, but scores of ralliers returned to Tahrir Square on Friday. At least 39 people have died in clashes since last weekend.

The White House issued a statement Friday condemning the violence and supporting a “full transfer of power to a civilian government” — ratcheting up international pressure on the interim government.

>”The United States strongly believes that the new Egyptian government must be empowered with real authority immediately. We believe that Egypt’s transition to democracy must continue, with elections proceeding expeditiously, and all necessary measures taken to ensure security and prevent intimidation. Most importantly, we believe that the full transfer of power to a civilian government must take place in a just and inclusive manner that responds to the legitimate aspirations of the Egyptian people, as soon as possible,” the statement says.

Scott Mastic, director of the International Republican Institute’s Middle East and North Africa programs, said from Cairo that Egyptian authorities are reluctant to postpone the elections, and that such a delay would feed the anger of the protesters.

It’s been nine months since the fall of President Hosni Mubarak, and some political parties that are newer and less organized than the more established parties, like the Muslim Brotherhood, want to have more time to organize. Changes in the electoral code are aimed at giving political parties more of a chance to participate by increasing the number of seats elected by proportional representation that are only available to parties, rather than individual candidates, Mastic told us.

There has to be a balance and the demand is for the process to move forward, he said.

As of Friday, only one major party has called for a boycott of the elections out of the several dozen political parties in Egypt, he added.

International election monitors will be looking at the mechanics of the process — whether it’s orderly — and election officials’ understanding of the process. They also will gauge the mood of the electorate, through turnout, whether there is unrest or conflict that impairs the ability of voters to express their will, and whether there is undue influence from the parties, Mastic said.

We’ll take a closer look at event leading up to Egypt’s parliamentary vote on Friday’s NewsHour. View all of our World coverage and follow us on Twitter.