Egypt Gears Up for More Protests 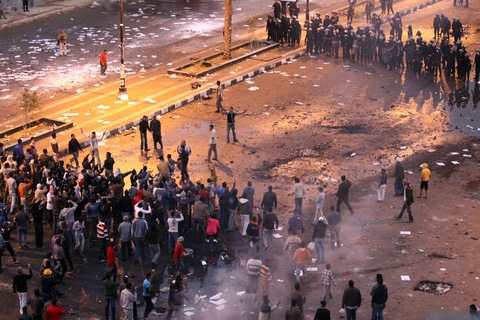 The Tunisia-inspired protests in Egypt demanding the end to President Hosni Mubarak’s rule continued Thursday and, if organizers’ predictions are correct, will continue in even greater force on Friday after mid-day prayers.

In the cities of Suez and Ismailia, hundreds of protesters stayed on the streets late into the night, touching off clashes with police who fired rubber bullets and tear gas to try to disperse the crowds.

Egyptian Nobel laureate Mohamed ElBaradei, former head of the U.N. International Atomic Energy Agency, returned to his homeland Thursday, saying he would join demonstrators and called for a peaceful, political response to the protests. The Associated Press reports:

The protests, which began in Tunisia and led to the toppling of President Zine al-Abidine Ben Ali, who was in office for 23 years, are widely believed to have touched off the Egyptian demonstrations this week and led to other mass protests in Yemen on Thursday.

“Egyptians and now Yemenis are saying after 23 years, it’s possible for a public to topple a government,” said Jon Jensen, GlobalPost correspondent in Egypt. The protests aren’t new, he added, but the numbers and the participation of average people are.

On Friday, protesters are planning another large-scale demonstration, said Jensen. And this time it reportedly will involve the Muslim Brotherhood — the main opposition group that has abstained from the protests so far.

A spokesman for the group, Essam el-Arian, called on members to participate on Friday, saying Egyptians had “accumulated” anger as a result of years of political oppression under Mubarak’s regime, and that the protests would continue “until the regime responds to the real demands” of the people, reported Radio Free Europe/Radio Liberty.

Organizers have used social media including Facebook and Twitter to rally protesters, but users have since reported service interruptions within Egypt.

Jensen said activists have been playing a cat-and-mouse game, in which they send a decoy message about where to congregate and then change the venue at the last minute — sending text messages about the new location where police will not be waiting for them.

On Thursday’s NewsHour, we’ll have more on the protests spreading in the Arab world, and Jeffrey Brown will talk to regional analysts about the U.S. options for responding. Follow our coverage on Twitter.