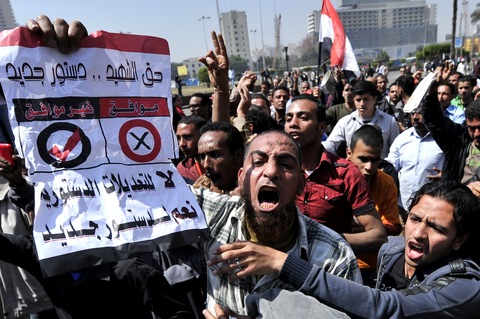 Demonstrators in Egypt’s Tahrir Square hold a sign that says “No to limited constitution amendments, Yes for a new constitution.” (Aris Messinis/AFP/Getty Images)

Egyptians vote Saturday on a slate of constitutional changes in time for parliamentary elections in June and presidential elections in August. Some people say the amendments don’t go far enough and are urging a “no” vote, while others say they are good enough for now.

Samer Shehata, assistant professor of Arab politics at Georgetown University, explains some of the background and controversies around the changes.

Article 75 would require the president to be an Egyptian, and says a candidate would be ineligible if he or she had dual nationality, parents who were citizens of countries other than Egypt or married to a non-Egyptian.

Article 76 would require presidential candidates to have either the support of 30 members of Parliament, the backing of 30,000 eligible voters from at least 15 (or about half of) the country’s governorates, or be nominated by a registered political party with at least one representative in the upper or lower house of Parliament.

SHEHATA: The key things to know are that Article 76 was amended by the Hosni Mubarak regime in 2005 and then in 2007. And the ostensible goals of the amendments in 2005 were to move from a referendum system — in which Egyptians would vote yes or no on a presidential candidate who was approved by two-thirds majority of the lower house of parliament — to multi-candidate presidential elections. But in reality, the reform limited the conditions to running so much that it was really the ruling party that was able to nominate someone.

The way the amendments are done now, the restrictions have been significantly reduced, so that well-known individuals could secure enough signatures from parliament or the public to put themselves on the ballot.

Article 77 would reduce the presidential term from six years to four years and impose a two-term limit.

SHEHATA: No one in Egypt is saying there shouldn’t be term limits, but some specialists say it makes no sense to have a presidential term that is four years, while parliamentary terms are five years, which means there would be elections all the time in Egypt. One alternative proposition is either to increase the presidential term to five years or reduce the parliamentary term to four years so that they would match.

SHEHATA: Article 88 originally gave the judiciary the responsibility for supervising fully elections. That didn’t always occur, but at least it was there in the constitution. In 2007, it was one of the amendments Mubarak scrubbed and would be re-instituted if the current batch of amendments passes.

Article 93 would give the highest appeal court the power to rule on challenges to disputed parliamentary races, whereas before only the parliament could decide.

SHEHATA: The previous system was that regardless of what courts said about the validity of electoral results and fraud, only parliament could rule on the status of a member. The reason for that was parliament was dominated by the ruling party, and the judiciary had some degree of independence.

Article 139 would require the president to appoint a vice president within 60 days. Before, he could appoint one or more vice presidents and remove them from their posts.

The controversy in Egypt is, many say shouldn’t it be the case that the vice president is on the ticket — doesn’t it give a tremendous amount of power to the president to choose a vice president in an undemocratic manner. But others say that it’s not a fully presidential system, unlike the United States for example, and therefore it’s OK. The constitutional committee also says they couldn’t make the change because it would require other structural changes in the constitution which wasn’t within the scope of their work given to them by the supreme council of the armed forces after Mubarak resigned.

Article 148 would impose new restrictions on the president declaring a state of emergency, including requiring the approval of a parliamentary majority, and says it cannot exceed six months unless it is extended through a referendum.

SHEHATA: Egypt has been under emergency law since 1981, and the law gives great discretion and power to both the executive and security forces: to detain people almost indefinitely, to close newspapers, to limit the right to peaceful assembly and protests. It was basically an authoritarian measure, and this change would limit the application of the emergency law.

Use of military courts

Article 179 would be canceled. The article allows the president to use military courts for “terror” cases even for civilians.

SHEHATA: In the previous era under Mubarak, the president had the right to refer cases to military courts, which did not have the same due process of civilian courts and could not be appealed. There were a number of political opponents to the Mubarak regime whose cases were sent to military court to guarantee the outcome.

SHEHATA: The constitutional committee tasked to make these limited changes did so with the premise that there would be a new constitution drafted, so that’s the more important part of the changes.

Egyptians overwhelmingly approved the changes with about 14 million — or 77.2 percent — in favor, and 4 million — or 22.8 percent — against, according to results announced Sunday.