A Year After Revolution Began, Many Egyptians Still Divided 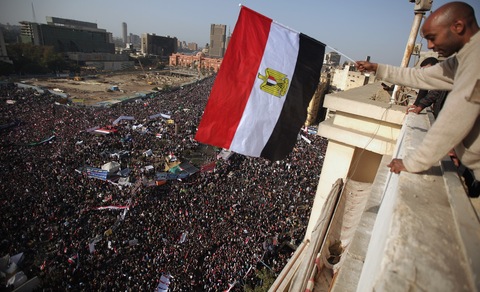 Egyptians gather in Tahrir Square in Cairo on the anniversary of the Jan. 25 revolution. Photo by Jeff J Mitchell/Getty Images.

As Egyptians amassed in Cairo’s Tahrir Square on Tuesday to mark the one-year anniversary of the start of their regime-changing revolution, many are still divided on where they see the country going, said GlobalPost correspondent Erin Cunningham.

“Protesters still see a lot of injustice in the post-Mubarak period,” said Cunningham. “The military has obviously been quite repressive in cracking down on protesters and criminalizing political dissent.”

But others in the country view the ongoing protests as destabilizing and unnecessary, she continued. “There are a lot of people who just want to get on with their lives. They’re hurting economically. So it is very polarized at the moment.”

The country elected a parliament in staggered elections over the past two months. Monday was its first day in session — a “raucous” first day of cheers and jeers, procedural stumbles and sometimes misworded oaths of office, said Cunningham.

“It was chaotic, but it had a sort of energy that I think everyone was really excited about,” she said. “I think a lot of people were very proud. Driving around the city, you could see people crowding around television sets in cafes and watching the session being broadcast.”

On Monday, protesters marched to the parliament building to have their concerns heard, but it didn’t provoke violence. “I didn’t see much anger. People are still very ready to voice their political opinions,” she added.

The parliament is tasked with appointing a 100-member assembly to draft a constitution.

Egypt next holds staggered elections for the upper house, or Shura Council — one-third of which will be appointed by the Supreme Council of the Armed Forces and the rest elected by the people.

Military generals have promised to cede power to civilian authorities by June 30. They said they will open nominations for presidential candidates in mid-April and hold presidential elections in mid-June, said Cunningham.

“The Muslim Brotherhood, which is leading the parliament, has said that the army needs to stick to that timetable,” she added.

A graphic from the BBC shows the makeup of Egypt’s parliament.

Georgetown University’s Samer Shehata and the Council on Foreign Relations’ Steven Cook discuss the Egyptian security force’s moves and motivations on the NewsHour:

GlobalPost has a new series called “The Army, the People: Egypt’s Continuing Revolution,” which looks at the military’s funding and tactics, and what’s happened to the leaders of the so-called January 25 Revolution.