Calm in Egypt as Police and Protesters Call a Truce 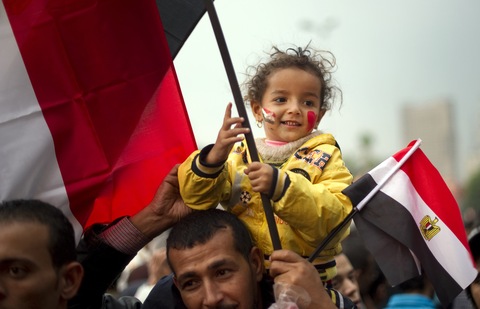 A girl sits atop her father’s shoulders in Cairo’s Tahrir Square. Photo by Odd Andersen/AFP/Getty Images.

After five days of heated — and sometimes deadly– confrontations with police this week, protesters and Egyptian authorities have called a truce in the capital Cairo just days before parliamentary elections are set to begin.

Tens of thousands of Egyptians rallied this week, mainly in Cairo’s Tahrir Square — the focal point of demonstrations in the spring that pushed President Hosni Mubarak out of power. Protesters now are demanding an earlier end to the temporary military rule. The Supreme Council of the Armed Forces is overseeing the country’s transition to democracy.

Rock-throwing protesters this week were shouting “down with the field marshal,” referring to army chief Field Marshal Mohamed Hussein Tantawi, Mubarak’s former defense minister. Egyptian police fought back with tear gas and rubber bullets, Jon Jensen, GlobalPost’s correspondent in Cairo, told us from the frontlines on Monday. (Listen to his audio report here.)

“Most of those involved looked like teenagers. Some seemed out just for a fight,” reported ITN’s Jonathan Rugman. “Others had seen their friends gassed or shot and they were seeking revenge, and all day, every few minutes, the blare of ambulances ferrying the injured.”

On Tuesday, the violence continued despite the military council’s promise to move up presidential elections by six months, to June 2012. Mervat Hatem of Howard University described the military’s concessions and the differences between the objectives of the protesters and political parties:

A truce brokered by Muslim clerics ended the fighting on Thursday. At least 37 people have been killed since the protests turned violent on Saturday. The military leadership said it would not step down early, and that parliamentary elections will proceed as planned on Monday.

Rugman reported that the protesters still want to topple Egypt’s military rulers, but “ironically, it’s the army which is now safeguarding a truce between the people and the riot police.”

We’ll have more on developments in Egypt on Thursday’s NewsHour. View all of our World coverage and follow us on Twitter.