International Monitor: Among Egypt’s Electorate, a ‘Sense of Pride’ 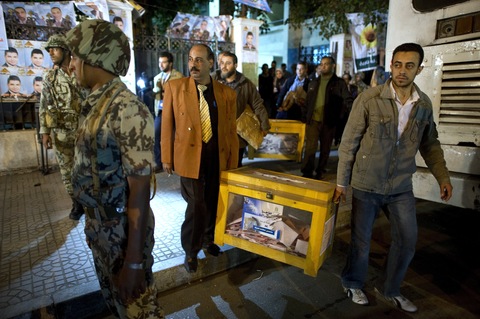 Ballot counting begins in the first round of Egypt’s parliamentary elections. Photo by Odd Andersen/AFP/Getty Images.

Despite some rumors of political parties trying to entice votes through payments and other means, a second day of voting in Egypt came without the violence many had feared.

We talked to Scott Mastic, director of the International Republican Institute’s Middle East and North Africa programs, on Friday during the lead-in to the vote, and checked back in with him on Tuesday for an on-the-ground perspective on Egypt’s historic elections.

Voters crowded polling sites on Monday, in some cases waiting for hours to vote, said Mastic. Voting was a little lighter on Tuesday.

“Many people we talked to said ‘this is the first democratic election we’ve ever had’ … What I see from voters is a real enthusiasm and sense of pride about wanting to take part in this process and feeling for the first time that their vote matters.”

Some polling stations opened late because the ballots weren’t delivered in time, and some election monitors also noted campaign activity continuing around polling places where they weren’t allowed, Mastic said. “It’s not by any one party. There are multiple parties doing it. There are rumors and allegations of things like influence through the purchasing of votes. But at this point those types of things are not possible to substantiate from our standpoint.”

But in general, the voting appeared to proceed smoothly, he said. “No election is perfect and by the standard of this country’s first democratic election I would say that yesterday and today were incredibly positive given that many of the fears that existed on Sunday night.”

When protesters in Tahrir Square clashed with police in the days leading up to the election, people worried that elections would be delayed or unravel into violence. But those fears were not realized.

The ballot counting begins Tuesday night. “You have people in the country who are energized by the right to express their democratic choices, and how the counting process is carried out and whether it is seen as a process that’s transparent, open and fair will factor significantly into people’s attitudes about both this phase of the election and the election moving forward,” he said.

The next round of parliamentary elections is Dec. 14 and 15, and a third round is set for Jan. 3 and 4. Runoffs for candidates receiving less than 50 percent of the vote will occur earlier, and results for all parliamentary seats are expected after the voting is completed in January.

The New York Times has a map of the three phases of voting in Egypt’s parliamentary elections.

The International Crisis Group’s Robert Malley and Egyptian journalist Gameela Ismail discuss the pressure on the ruling military council to expeditiously guide the country through the democratic process:

We’ll hear from Scott Mastic in Cairo, and from Solomon Moore on Congo’s elections, on Tuesday’s NewsHour. See all of our World coverage and follow us on Twitter.