What Tossing Tomatoes at Clinton’s Convoy Says About Egyptian Politics 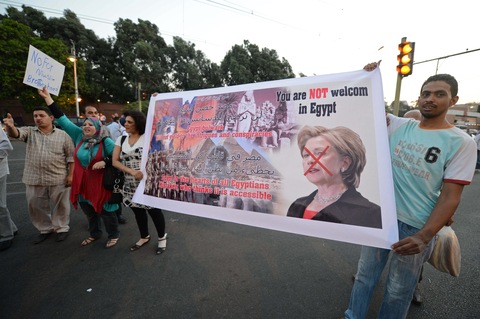 Egyptian demonstrators protest the visit of Secretary of State Hillary Clinton outside the presidential palace in Cairo on July 14. Photo by Khaled Desouki/AFP/Getty Images.

During Secretary of State Hillary Clinton’s visit to Egypt over the weekend to reaffirm Washington’s support for the North African country’s transition to democracy, protesters showed their displeasure at her and the United States by lobbing tomatoes and shoes at her convoy.

Neither Clinton nor the vehicle she was riding in were hit, but the actions showed the anger and views of some Egyptians that the United States and Israel had paid anti-government demonstrators to sow chaos and destabilize the state, said GlobalPost correspondent Erin Cunningham in Cairo.

“For awhile now the protesters and the people who have been working for change and pushing the revolution forward, have been painted by the military, state media and pro-military politicians as being foreign-paid thugs who want to destroy the country and want to serve the interests of the United States and Israel,” said Cunningham.

In December, when a woman was beaten in Tahrir Square in Cairo, and her image viewed around the world on YouTube, Secretary Clinton demanded the military respect the rights of women, Cunningham continued. “So she became a focal point for a lot of the pro-military demonstrators who were saying, ‘stay out of our business.'”

The protesters over the weekend also reportedly yelled “Monica” at the convoy, referencing Monica Lewinsky, the White House intern with whom former President Bill Clinton admitted to having an “improper relationship.” The pro-military demonstrators have referenced Lewinsky in the past, telling Secretary Clinton to pay attention to the women in her own country, said Cunningham.

The Egyptian military and Muslim Brotherhood appeared locked in their own political struggle. On Sunday after meeting with Clinton, Egypt’s top army general, Field Marshal Hussein Tantawi said the armed forces would not let a “certain group” dominate the country.

The country is divided between supporters of newly elected President Mohammed Morsi of the Muslim Brotherhood and those who oppose his political party — and now joining his opponents are those who felt Morsi overstepped his bounds by trying to overrule the Supreme Court and reinstate the Muslim Brotherhood-led parliament, said Cunningham. Morsi has since backed down and said he would respect the Supreme Court’s decision.

Nonetheless, “I think he lost a lot of people who might otherwise have been on his side … with that move,” she said. And the military council — by saying it wouldn’t let one group dominate politics — was likely speaking to that segment of society, she added.

The Egyptian electorate now will have to vote for a new parliament 30 to 60 days after the ratification of a new constitution. It’s unclear when the constituent assembly will finish writing the constitution, and in the meantime the military has reserved the right to veto it, Cunningham said.

On the June 25 NewsHour, regional analysts Hishem Melhem and Samer Shehata discussed the challenges that lie ahead for Morsi, including a dissolved parliament and the country’s economic ills: