Step-by-Step Guide to Electing a Pope 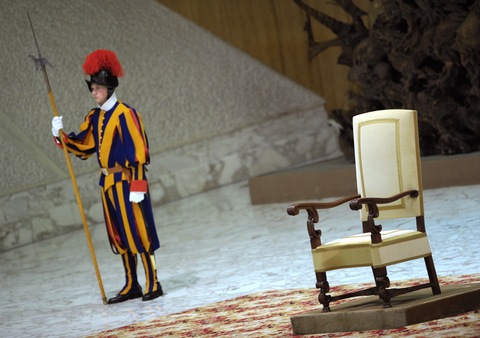 A Swiss guard stands next to an empty seat in the Vatican’s Paul VI hall. Photo by Filippo Monteforte/AFP/Getty Images.

Updated March 12: The conclave of cardinal electors met Tuesday to begin voting on the next pope in a secret balloting process. The 115 cardinals will vote once Tuesday and twice each subsequent morning and afternoon until someone gets two-thirds of the ballots.

Pope Benedict XVI resigned last month, saying he was no longer up to the rigors of the job.

Read all of the NewsHour’s Papal Transition coverage, where we will be tracking developments.

Cardinals from all over the world are converging on Rome to elect a new leader of the Roman Catholic Church’s 1.1 billion followers. The College of Cardinals is expected to meet Monday to decide when the conclave will begin to choose a replacement for Pope Benedict XVI. He decided to step down Feb. 11 for health reasons.

Here’s how the election process is expected to go:

On the day the conclave begins, the cardinals will celebrate Mass in St. Peter’s Basilica and then head to the Sistine Chapel, where they’ll take an oath of secrecy and pledge to avoid interference by outside groups, writes the Rev. Thomas J. Reese, a senior fellow at the Woodstock Theological Center at Georgetown University.

All but the cardinal electors are then ordered to leave the chapel with the words, “Extra omnes,” or “Everybody out,” in Latin.

The cardinals can begin voting that day. If no one receives the necessary two-thirds vote to become pope, they meet again the following day for another round of balloting.

The cardinals who collect the ballots and count the votes are selected at random, and new ones are assigned each morning and afternoon.

Each cardinal writes the name of his choice on a folded card that he presents at the altar and puts in a lidded urn. The ballots must match the number of cardinals present, or they are burned without being tallied.

The first counter writes each name on the ballots on a separate piece of paper, hands the ballot to the next counter who looks at it and gives it to a third observer who reads the name aloud. The ballots are strung together and put in another urn.

The ballots are then burned, and chemicals are added to make the smoke white — if a pope is selected — or black if no one gets the two-thirds vote.

The process continues with two votes in the morning and two in the afternoon until a new pope is chosen.

If after the third day, no one is selected, the voting is suspended for at least a day for prayer and discussion among the cardinal electors.

What Happens When the Pope Is Chosen?

The newly elected person is asked if he wants to be pope and what he would like his name to be. The name is then announced to those gathered in St. Peter’s Square, and the pope may speak to the crowd.

What Will the New Pope Wear?

The pope typically wears an elbow-length cape known as a mozzetta, a ceremonial white peaked hat called a mitre (or a zucchetto skullcap on less formal occasions), red shoes symbolizing the blood of martyrs, and a variation of a fisherman’s ring, which shows the pope is a successor of Saint Peter who fished for a living.

What Will Happen to Pope Benedict XVI?

The former pope will continue to live in the Vatican, keep the name Benedict XVI and will be known as “pope emeritus”.