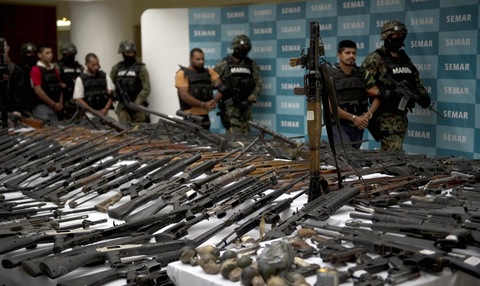 Revelations about a U.S. sting program that backfired has provoked new anger in Mexico, where lawmakers and citizens already are upset about the flow of American weapons to Mexican drug gangs.

The Bureau of Alcohol, Tobacco, Firearms and Explosives has been criticized for “Operation Fast and Furious” in 2009, in which it let people purchase weapons it knew would end up in criminals’ hands in the United States and Mexico in order to track them and build a case against them.

Two AK-47 rifles connected to the program were found at the scene of the killing of a border agent in Arizona in December. The U.S. House held hearings on the matter in June, where witnesses questioned the reasoning behind the sting since it is difficult for the United States to prosecute criminals in Mexico.

Mexican lawmakers, angered at the operation, called it a “grave violation of international rights.”

This week, CNN reported that about 1,400 guns are still unaccounted for out of approximately 2,000 involved in the program.

On Monday, the ATF said it now will require gun dealers in states bordering Mexico to notify the agency when someone buys two or more semi-automatic rifles, the gun of choice by drug traffickers.

We checked in with Ioan Grillo, GlobalPost correspondent in Mexico City, to find out how all of this is playing out in Mexico.

“It’s had a very negative impact here at all levels about American policy toward Mexico,” said Grillo. To conspiratorial minds of some Mexicans, “it looks like rather than making good efforts to stop violence in Mexico, the United States is complicit in the violence.”

A report commissioned by Congress in June indicated that 70 percent of firearms recovered at crime scenes in Mexico and traced to their origin in 2009 and 2010 had come from the United States.

The purpose of the Fast and Furious operation was to build legal cases against Mexican drug cartels active in the United States, Colombia, Mexico and other countries, and to do major damage against the organizations rather than just snare individuals, said Grillo.

And American agents might have been reluctant to consult with Mexican officials about the operation beforehand in case drug cartels had infiltrated Mexican law enforcement entities, as some believe, he said.

People in Mexico had been complaining for years about U.S.-made guns going to gangsters and paramilitary members, he continued. “And whatever the real motivations of the American agents, they see this as evidence that the U.S. government is not only not doing enough to stop violence in Mexico, it is actively involved in perpetrating the violence here.”