Fleeing Iraqis are in ‘extreme fear’ and need basic supplies

The United States overnight airdropped food and water to Iraqis in the northern part of the country who are trapped by Islamic extremists. Those who were able to escape to safer areas of the Kurdish region “are in extreme fear. They have run for their lives,” said Aram Shakaram, director of program development in Iraq for Save the Children.

When the PBS NewsHour spoke to him by phone on Friday, Shakaram had just returned from the Kurdish capital Irbil to his home in Sulaymaniyah, about 160 miles northeast of Baghdad. He said he saw “hundreds of cars packed with people running from the conflict zones” in other parts of Iraq.

Extremists, who call themselves the Islamic State, have been taking over towns and cities mostly in northern Iraq, including Fallujah and Mosul earlier this year. On Saturday, they captured Sinjar near the Syrian border, displacing more than 200,000 Iraqis. 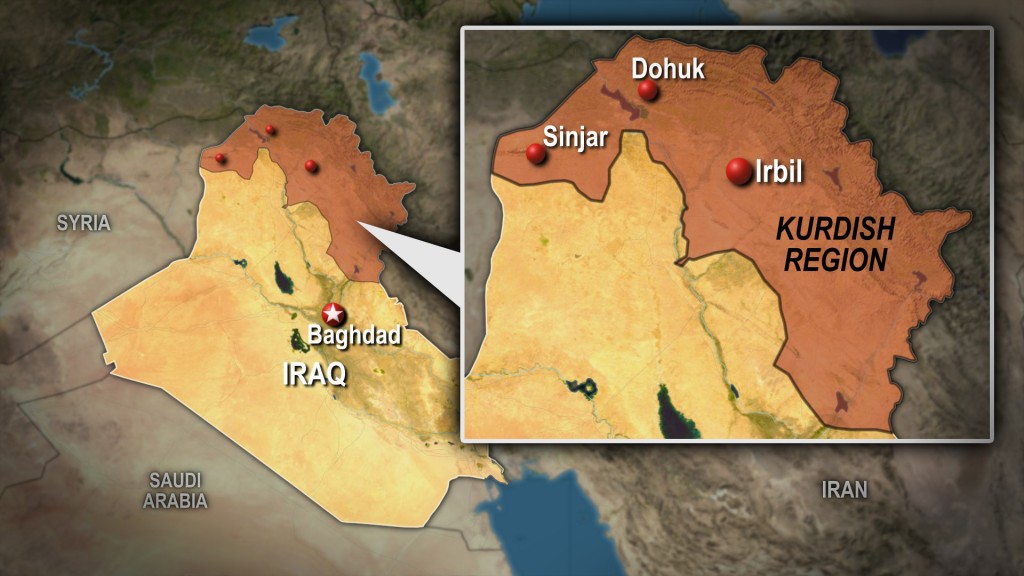 On Thursday evening, President Barack Obama announced the humanitarian airdrops, and said he had authorized airstrikes in northern Iraq if necessary. On Friday morning, the Pentagon confirmed that the first bombs were dropped on a piece of artillery.

Many of those forced to flee Sinjar are Yazidis, a Kurdish-speaking religious minority. “There are still thousands of them stranded in the conflict zone who have not been able to make it to the safe areas,” said Shakaram.

He said aid workers in neighboring Dohuk have provided shelter and water to the estimated 60,000 Iraqis who were able to leave over the past few days, and the workers plan to hand out food and non-food supplies as well.

“They want to go back as soon as their place becomes safe, but that is unclear,” he said. “We’re still supporting people who left their homes in January. I believe this conflict will take some time.”

Left: Iraqi Yazidis fled Sinjar, after extremists took over the northwestern town, to the Kurdish city of Dohuk on Aug. 5. Photo by Hamit Huseyin/Anadolu Agency/Getty Images