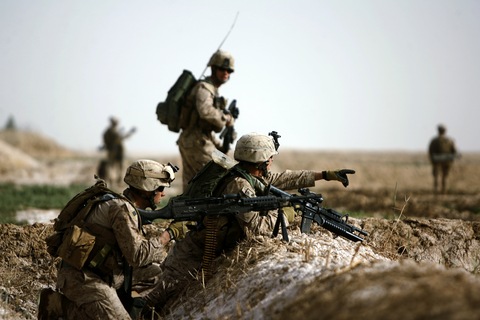 Firefights erupted in the southern Afghan town of Marjah on Monday, where Marines and Afghan forces are battling insurgents as part of an offensive for a third straight day.

About 15,000 Afghan and foreign soldiers, led by U.S. Marines, are working to wrest control of the Taliban stronghold of Marjah in Afghanistan’s southern Helmand Province.

Troops pushed deeper into the town of about 75,000 to 100,000 people on Monday and encountered gunfire from several different locations, according to the Associated Press.

Afghan officials said the forces have encountered “low resistance” and that they thought some insurgent fighters had fled the area — possibly to Pakistan — ahead of the offensive.

During the second day of fighting on Sunday, a rocket missed its target by about a third of a mile and hit a home outside of Marjah, killing 12 civilians including six children, NATO officials said. NATO Secretary General Anders Fogh Rasmussen issued a statement extending his condolences to the families and saying Afghan and international forces will continue to do everything they can to minimize the risk to civilians.

Marines and Afghan forces had been taking small-arms fire from a mud-walled compound. They returned fire with GPS-guided rockets that instead struck another building, the New York Times reported.

Gen. Stanley McChrystal, the top U.S. and NATO commander in Afghanistan, apologized to Afghan President Hamid Karzai, saying, “We deeply regret this tragic loss of life.” McChrystal also suspended use of the rocket system pending a thorough review, according to the AP.

When Marine and Afghan forces landed the first day of the offensive, they set up camp at the Koru Chareh bazaar, a central commercial district in Marjah, and raised the Afghan flag to show the city was no longer under Taliban control, the Wall Street Journal reported.

Their outpost came under attack Sunday evening by insurgents with rocket-propelled grenades, but they were held off by the Marines. Three insurgents were killed but no Marines or Afghan troops were injured, according to the WSJ.

The Marjah offensive is the largest the United States has launched since the start of the war in Afghanistan in 2001 and the first major offensive since President Barack Obama announced he was sending 30,000 more troops under a new Afghanistan-Pakistan strategy.

“It is the first major operation in which we will demonstrate, I think successfully, that the new elements of the strategy, which combine not only security operations but economic reform and good governance at the local and regional level with a much more visible presence of Afghan forces, will take place,” said national security adviser James Jones on “Fox News Sunday.”

The objectives of the Marjah operation, according to the NATO-led International Security Assistance Force, or ISAF, include extending the authority and influence of the Afghan government, removing safe havens for the Taliban and improving freedom of movement along transportation arteries.

Jeffrey Dressler, a research analyst at the Institute for the Study of War in Washington, D.C., said he thinks the objectives can be met because the same type of operation has been proven successful in Afghanistan in the past.

“The good news is we’ve done this before in Helmand — perhaps not quite on this scale in terms of the size of the operation — but we’re not reinventing the wheel here. We know what works and what doesn’t,” he said.

But Seth Jones, a senior political scientist at the RAND Corporation, said the central government’s ability to control a rural place like Helmand Province is minimal, so the Afghan government and NATO forces are reaching out to a range of tribal and other community leaders to “try and leverage their influence among the various communities in and around Marjah.”

Thomas Johnson, a research professor at the Naval Postgraduate School’s National Security Affairs Department, said people should have realistic expectations about what the military offensive will actually accomplish. “Good governance doesn’t come through the barrel of a gun in Afghanistan. It comes from working with the people and gaining their trust and confidence.”