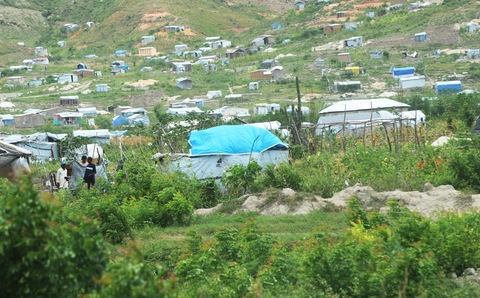 More than a year and a half after Haiti suffered a catastrophic earthquake, about 500,000 Haitians still live in tent camps in and around the capital Port-au-Prince, much of which still lies in ruins.

Displaced Haitians, many of whom live on less than $2 a day, also face rising food and rental prices, the threat of cholera and lack of basic services.

While the number of those in temporary shelters is significantly less than the 1.5 million forced from their homes immediately after the Jan. 12, 2010 quake, people are still living in about 900 tent camps and are in need of sanitation, clean water and more permanent shelter, said Charity Tooze, senior communications officer for the U.N. High Commissioner for Refugees, who recently returned from a visit to Port-au-Prince.

“While we were there, we had thundering rains, which flooded people’s tents, washed away their personal items and exposed them to raw sewage,” she said.

Because the camps were meant to be temporary and sit on private land, proper latrines were never dug and instead people are using portable latrines, which overflow.

Security also is a problem, and women have been raped in the camps or feel like they have to prostitute themselves for scarce food, said Tooze. (View a UNHCR study on the problem.)

People want to move on to the development phase, said Tooze, but basic survival needs are still not fully covered in the Caribbean island nation of 9 million.

In a speech to the U.N. General Assembly in September, President Michel Martelly described Haiti’s urgent needs and called upon international donors to follow through with their aid pledges, which total $4.6 billion. About 43 percent has been disbursed so far, according to the U.N. Office of the Special Envoy for Haiti.

Meanwhile, cholera — an infection of the small intestine that causes diarrhea — continues to pose a threat. It’s killed more than 6,200 people and sickened 440,000, and cases in Port-au-Prince are increasing, according to Doctors Without Borders.

Scientific studies traced the source of the cholera outbreak in Haiti to Nepalese peacekeepers stationed there. That, coupled with the alleged rape of a young Haitian man by Uruguayan peacekeepers is feeding a growing distrust among Haitians against the U.N. peacekeeping force. (The Uruguayan sailors accused of the crime were jailed upon their return home.)

Haitians also are frustrated with the pace and scale of rebuilding, said Robert Maguire of the International Development Studies Program at George Washington University, at a U.S. Institute of Peace panel discussion on Wednesday. Instead of depending on the government, Haitians are looking to nongovernmental organizations for help, he said.

The political quagmire in Haiti isn’t helping matters. The election of Michel Martelly earlier this year was viewed as a welcome change to politics as usual in Haiti, but he suffered his own political setback when parliament — made up mostly of other political parties — refused to confirm his choice of prime minister. He only recently got his third pick, Garry Conille, approved, raising hopes that rebuilding projects can now proceed.

Martelly has launched a housing initiative with the help of the International Organization for Migration to relocate tent dwellers to new homes in rebuilt communities and to give families rental subsidies.

But aid groups are worried the government is forcing people out of the camps before safer housing is available.

Unemployment is also a chronic problem, and Haitians are hoping a new South Korean textile factory located in northern Haiti will help not only bring 20,000 jobs to the country but entice other foreign investors as well. The factory is expected to be up and running in early 2012, Maguire said.

“You have all this human potential, people like you and me who want a future and are just waiting and they’re not reaching their potential,” said Tooze.