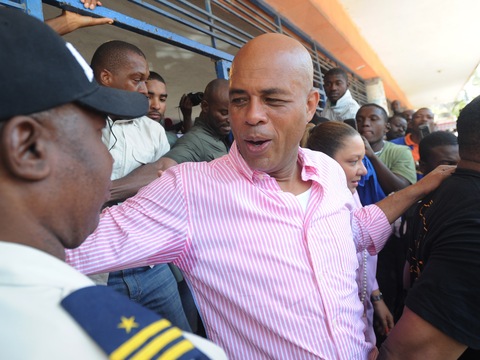 Preliminary results released Monday in Haiti’s presidential run-off election show musician Michel Martelly as the winner with more than 67 percent of the vote.

Martelly’s “compas” style of dance music sung in Haitian Creole involved outlandish costumes in the persona of “Sweet Micky”, but while he was campaigning he became more serious and replaced his wigs with suits and ties.

“He kept it very respectable. He tried to be a statesman for the campaign,” said Yves Colon, a Haitian-born journalism professor at the University of Miami.

Haiti’s Provisional Electoral Council said Martelly won 67.6 percent of the vote in the March 20 runoff, compared to 31.7 percent for candidate Mirlande Manigat, 70, a former senator and professor of constitutional law. After a period to allow for legal challenges, the results will become final in mid-April.

“Haitians were looking for something different and that’s what Martelly gave them, something radically different than the norm,” said Colon.

Haitian politics has had its share of twists. After the dictatorial Duvalier regimes, and a series of military governments in the 1980s, Bertrand Aristide who called himself a champion of Haiti’s poor, twice had to seek refuge in other countries from opponents. Rene Preval was president when the earthquake struck last year, crippling governmental institutions.

“After the earthquake, I think Haitians were just looking for signs of hope. … I think they wanted to have a break from logic and the political game,” Colon said.

Since he lacks political experience, Martelly’s ability to govern will come from the caliber of advisers he has around him, Colon added. In addition, “I hope that Haitians will be patient. It will take a while to get things moving and getting the machinery of government moving.”

The work ahead for Martelly and a new government is enormous and encompasses both immediate and long-term needs, analysts say.

Most of Haiti’s ministries were destroyed in the Jan. 12, 2010, earthquake, and nearly one in five civil servants died.

“The government already had a weak capacity to face disasters before the earthquake, and that capacity became weakened further after the earthquake,” said Alex Dupuy, sociology professor and chairman of the African American Studies Program at Wesleyan University. “Not much has been done even by the Interim Haiti Recovery Commission to get the process of reconstruction going. So it remains to be seen whether the new government will be up to the challenge.”

In addition to clearing out the rubble from the earthquake, the immediate priorities include moving the hundreds of thousands of people who are still living in tents to safe shelters, “especially given that the rainy season is practically upon us,” said Jean-Germain Gros, Haitian-born political science professor at the University of Missouri-St. Louis.

As for long-term needs, according to Gros, “Haiti needs everything: education, health care, infrastructure and stopping the degradation of the environment, protecting its borders, ensuring internal security — the whole gamut of what states do, Haiti needs.”

The international community, which pledged some $11 billion in aid to Haiti at a U.N. conference last year, can help, said Gros. And once a president is in place, the donors need to step forward and honor their commitments to Haiti, he added.