Several years ago, Erin Zaikis was working in rural Thailand. She was surprised to see how many children in the village didn’t wash their hands with soap, much less know what soap was.

“Just hearing that someone who’s 11, 12, 13 and has lived their whole life without something that I took for granted every single day of mine was the catalyst for thinking about a solution to this problem,” said Zaikis.

In 2013 Zaikis founded Sundara, a nonprofit working to improve hygiene and prevent disease in poor communities in India, Uganda and Myanmar by recycling used bars of hotel soap. Hotels pay a fee to join the program and have used bars of soap and liquid soap taken off their hands, so to speak. 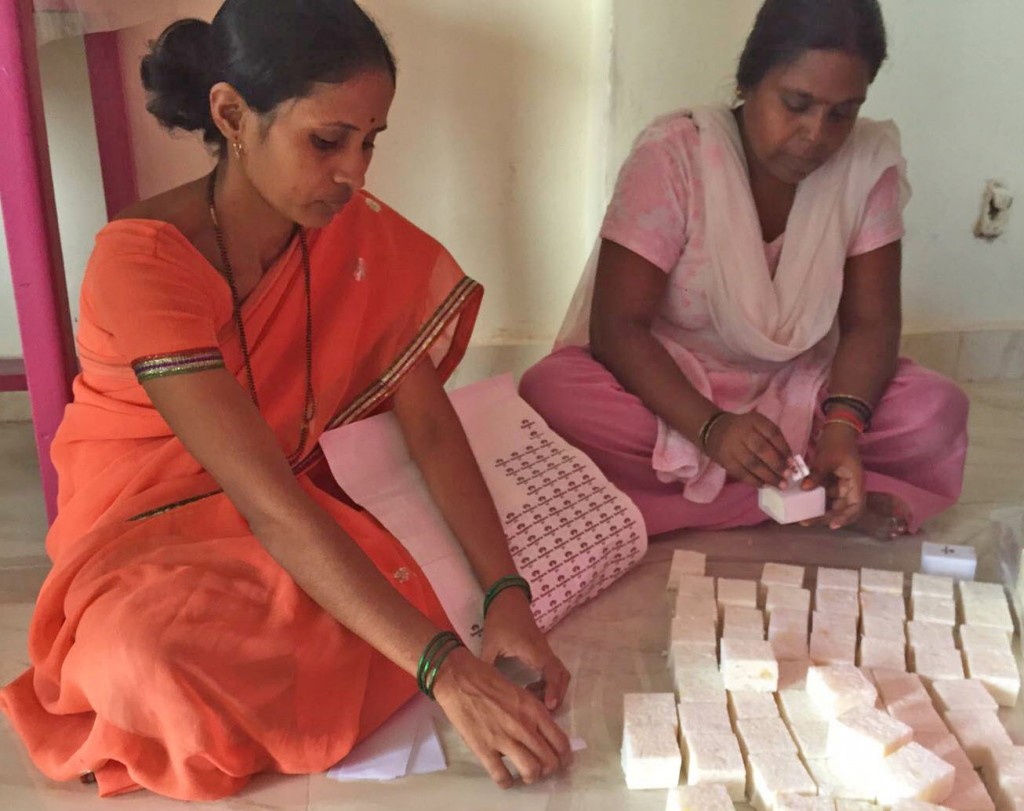 Women in India package soap for Sundara, a nonprofit that teaches underserved communities about the importance of using soap to prevent disease. Photo courtesy of Sundara

Hotels were wary at first, Zaikis said, but after the first few got involved and could see how children and communities benefitted, more were willing to participate based on the testimonials. Diversey/Sealed Air based in Charlotte, N.C., donates the machines and chemicals for the sanitizing process.

Community workers mold the clean scraps into new bars of soap and distribute them to schools, health clinics and community centers, where paid “hygiene ambassadors” teach others the importance of using soap to stay healthy.

Sundara connects with local women’s groups to recruit the hygiene ambassadors. The women, many of whom are illiterate and don’t have other options for employment, participate in a two-week training course and receive a monthly stipend. 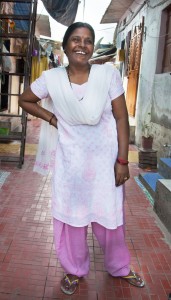 Kanchan Kashyap, one of the “hygiene ambassadors” in Mumbai, India, who is teaching her community to use soap. Photo by Emily Rose Weinstein

Kanchan Kashyap, 32, works as one of the hygiene ambassadors in Mumbai, India. When she and her husband moved there four years ago, they quickly learned they would need to supplement her husband’s income as a painter because of their increased living expenses.

Kashyap said when she joined Sundara’s team and they started going around the neighborhood touting soap’s benefits, people were skeptical about the recycled soap. “They would ask us, ‘What is this soap?’ and ‘How is it different?’ But we’ve explained it to them and proudly say that we use it for ourselves, so now they are interested.

“We each keep a supply of soaps at our houses to hand out when our friends stop over for tea.”

Kashyap said she and the other workers visit schools and teach the students to wash their hands before and after eating lunch and using the bathroom. Children who had never used a bar of soap before are not only washing their hands, but their arms, legs, face and feet.

Since its origin in 2013, Sundara, which means “beautiful” in Sanskrit, has reached 4,000 children in India, Uganda and Myanmar, and has a community-wide reach of 6,000.

“I try to bring in the idea of shared responsibility for this problem by involving community members wherever we can,” said Zaikis. She leaves decisions, such as whether to deliver more soap to a school or get new schools involved, up to the community members. In that case, the locals chose the former, and this fall they bumped up soap delivery to their existing network of schools from once to twice per month.

“It’s more important to see that the children are properly educated, and we’re not just dropping off the soap. I want a meaningful and consistent impact within the communities and not just be a handout,” she said.

The numbers of those reached might seem small now, but by educating a new generation of hand washers, it will have a multiplying effect, she added.

“Soap recycling is so simple. We’re not waiting for some complicated vaccine. The solution to this problem already exists.”

Left: Erin Zaikis (right) washes her hands with children in Shilonda, India, one of the countries where Sundara promotes the use of soap. Photo by Emily Rose Weinstein