One year ago today, an earthquake ripped through Nepal, taking more than 8,000 lives and robbing more than 500,000 people of their homes. Many of the survivors are still waiting to rebuild.

After the initial earthquake, Nepal was struck by a series of aftershocks, some nearly as brutal as the first. Monsoon season, coupled with an untimely blockade along Nepal’s border with India, further stalled the rebuilding process.

In addition, Nepal’s government set up a construction approval process to make new buildings more structurally sound. Residents must follow a step-by-step process, including on-site inspections, in order to get government subsidies.

The goal is to prevent the destruction and loss of life that the 2015 earthquake unleashed.

That earthquake wasn’t Nepal’s first, nor will it be its last. Nepal straddles two shifting geologic plates, making it earthquake-prone.

“Many of us spent a lot of time in Nepal, and the reality wasn’t if there was going to be an earthquake, but when,” said Jim Nowak, president and co-founder of the dZi Foundation, which helps communities in Nepal with construction projects. 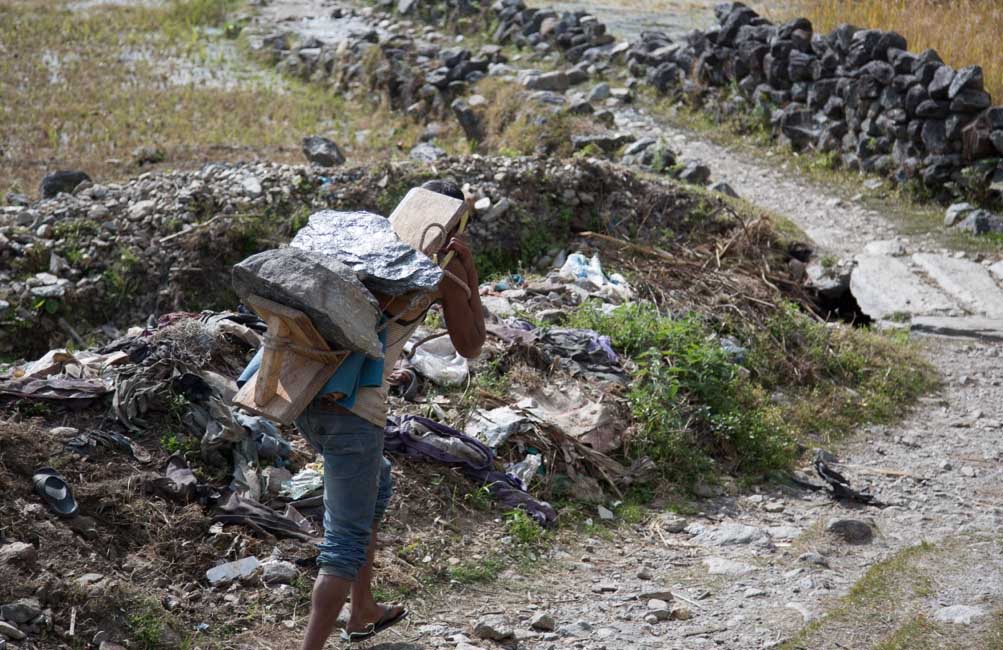 A man carries stones to a project site in Eastern Nepal. Photo by Mark Rikkers of the dZi Foundation

Nowak and Kim Reynolds, avid mountaineers, founded the Ridgway, Colorado-based nonprofit in 1998 after hiking in Nepal and encountering a run-down safe house for girls. That became their first fundraising project.

The dZi Foundation — named after the Himalayan stone beads that are said to protect the wearer — went on to help build schools, toilets, drinking water systems and bridges through private donations and grants.

The group, which has an in-country staff of 24 Nepalese and one American, focuses on helping rural communities in the eastern part of the country. After the 2015 earthquake struck, they added to their roster of projects the rebuilding of 31 schools over the next three years.

Previously, schools were built eight classrooms in a row. But the new design, which Nepal’s Department of Education has approved, puts only two classrooms side-by-side. The smaller, more solidly built structures, can withstand more shaking. 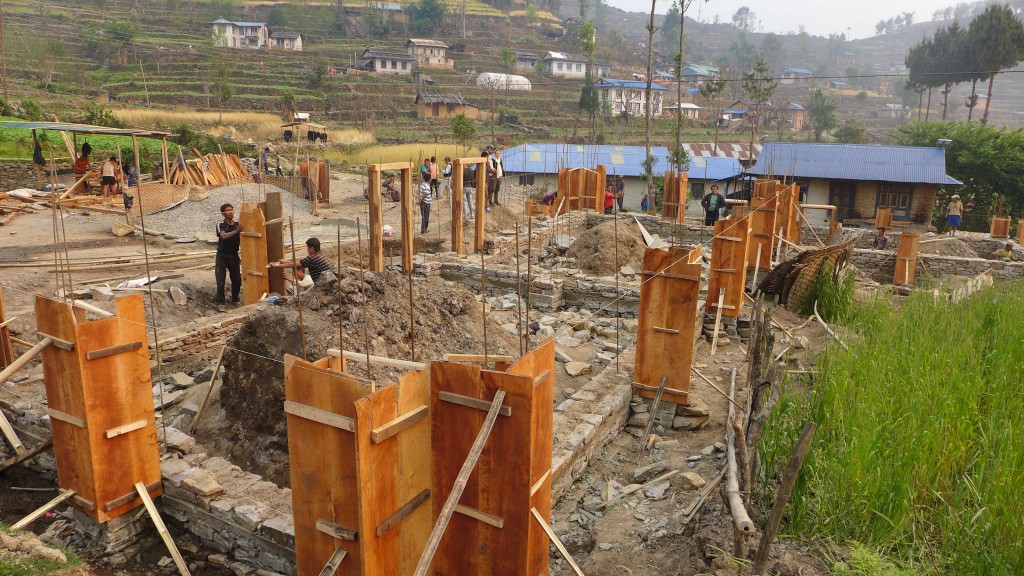 Two classrooms under construction in Eastern Nepal are built with reinforced concrete column buttresses. Photo by Jim Nowak of the dZi Foundation

Because the group was already working in the country and operating with private funds, it could embark on its earthquake recovery projects without many of the bureaucratic delays that other organizations are experiencing.

Jeffrey Shannon, Mercy Corps’ director of programs in Nepal, has seen firsthand the toll such delays are taking on the population. “When I go out, we get this sense of fear and frustration, anger and confusion. In the absence of solid information, rumors take hold.”

Shannon and his team — Mercy Corps has 133 staff across Nepal — are connecting residents with local government officials to get answers and are helping people stockpile building materials for when construction can begin. 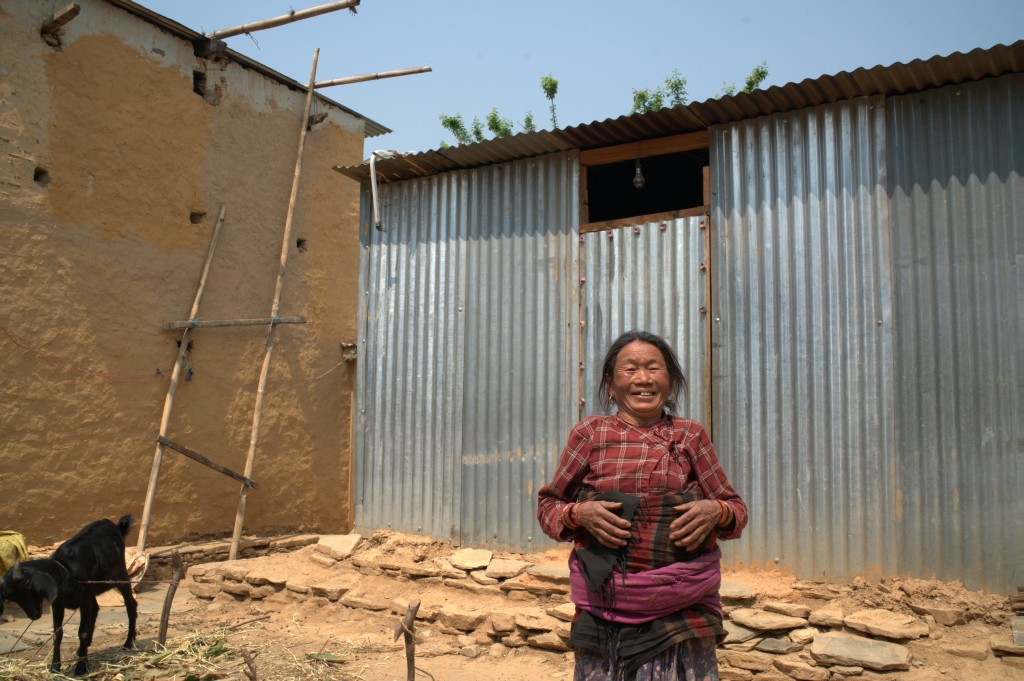 Shyam Maya Tamang is living in a metal sheet shelter until her house can be repaired. Photo courtesy of Mercy Corps

Meanwhile, people are living outside their cracked or crumbled homes — sometimes in corrugated metal structures if they are lucky — while they await repairs.

Other programs are underway, such as shoring up hillsides that are susceptible to avalanches. Shannon said NASA and the International Center for Integrated Mountain Development are helping provide and interpret satellite data to detect landslide-prone areas.

Mercy Corps has a cash-for-work program to pay villagers to strengthen the steep hills by planting fruit trees and erecting retaining walls. Over time, the retaining walls wear out, but by then the fruit trees have become more deeply rooted. 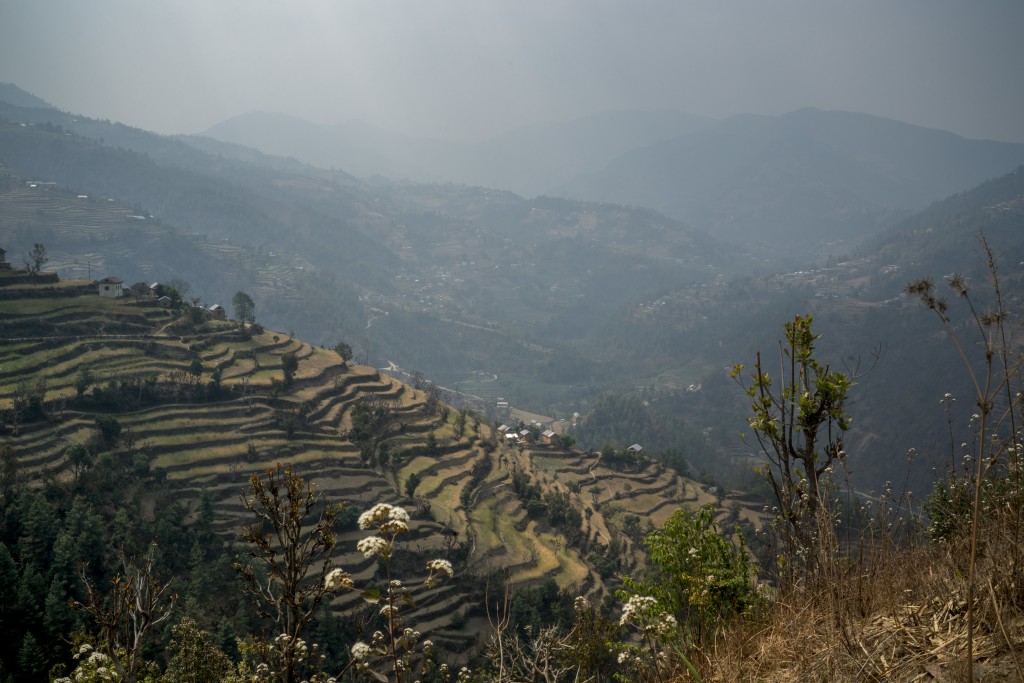 A view of the village Chyasingkharka in central Nepal shows how mountainous the country can get. Photo courtesy of Mercy Corps

Shannon said he is impressed by the resolve of the people of Nepal. “The series of disasters over the past year would have broken other places.”

Nowak agrees. “I am so inspired by their tenacity,” he said. “It makes what I do, and what our staff does, pale in comparison.”

Watch a report on Nepal’s rebuilding efforts and the role of political gridlock.

Left: Nirmala Shrestha is one of the villagers in Dhungkhark, Nepal participating in Mercy Corps' cash-for-work program to reinforce landslide-prone areas. Photo taken in March 2016 courtesy of Mercy Corps