Here’s what the Mexico border wall looks like now

The border between the United States and Mexico has a series of fences and walls, sensors and surveillance cameras, meant to stymie illegal crossings. President Donald Trump has said he will strengthen that security.

Big day planned on NATIONAL SECURITY tomorrow. Among many other things, we will build the wall!

On Jan. 25, he signed an executive order calling for the “immediate construction of a physical wall on the southern border” and 5,000 more border patrol agents, among other measures.

Some numbers you should know:

1,900 miles: The length of the border between the United States and Mexico, spanning California, Arizona, New Mexico and Texas

650 miles: The length of the barrier that already exists. It was constructed under the 2006 Secure Fence Act signed by President George W. Bush.

1,000 miles: The length that President Trump has said he wants his wall to be. It’s not clear whether it would be an all new wall or replace some of the existing sections. The rest of the span has natural obstacles such as rivers and cliffs.

$12 billion to $15 billion: Cost to build the wall, according to Republican congressional leaders. President Trump has said Mexico will pay for the wall, but Mexico’s President Enrique Peña Nieto said the country wouldn’t pay and canceled his meeting with the president. Reuters, citing an internal document from the Department of Homeland Security, reported Friday that the cost would be closer to $21.6 billion. 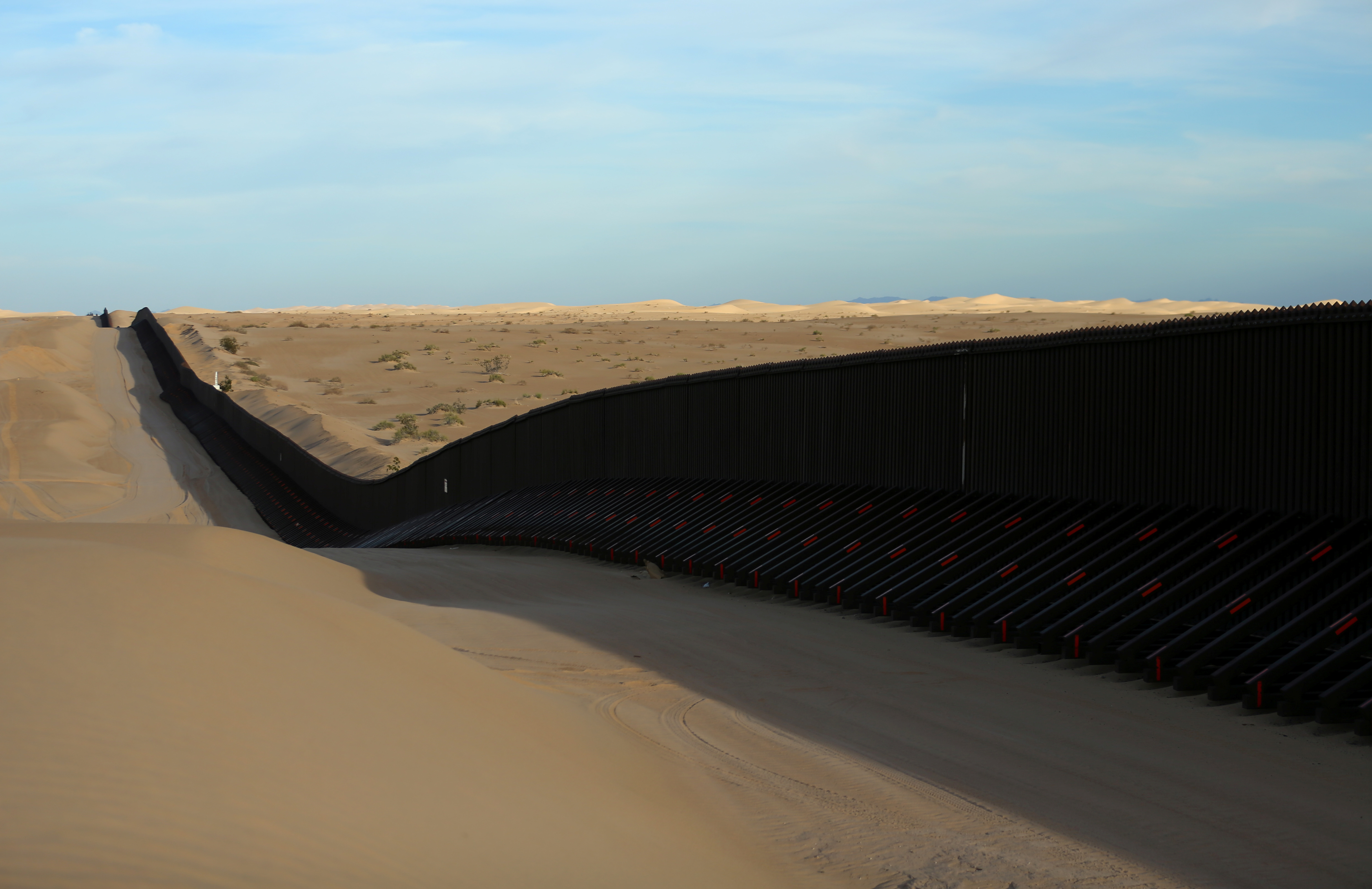 The barrier between Mexico and the U.S. is a series of walls and fences, along with natural barriers of rivers and cliffs. Photo by Mike Blake/Reuters 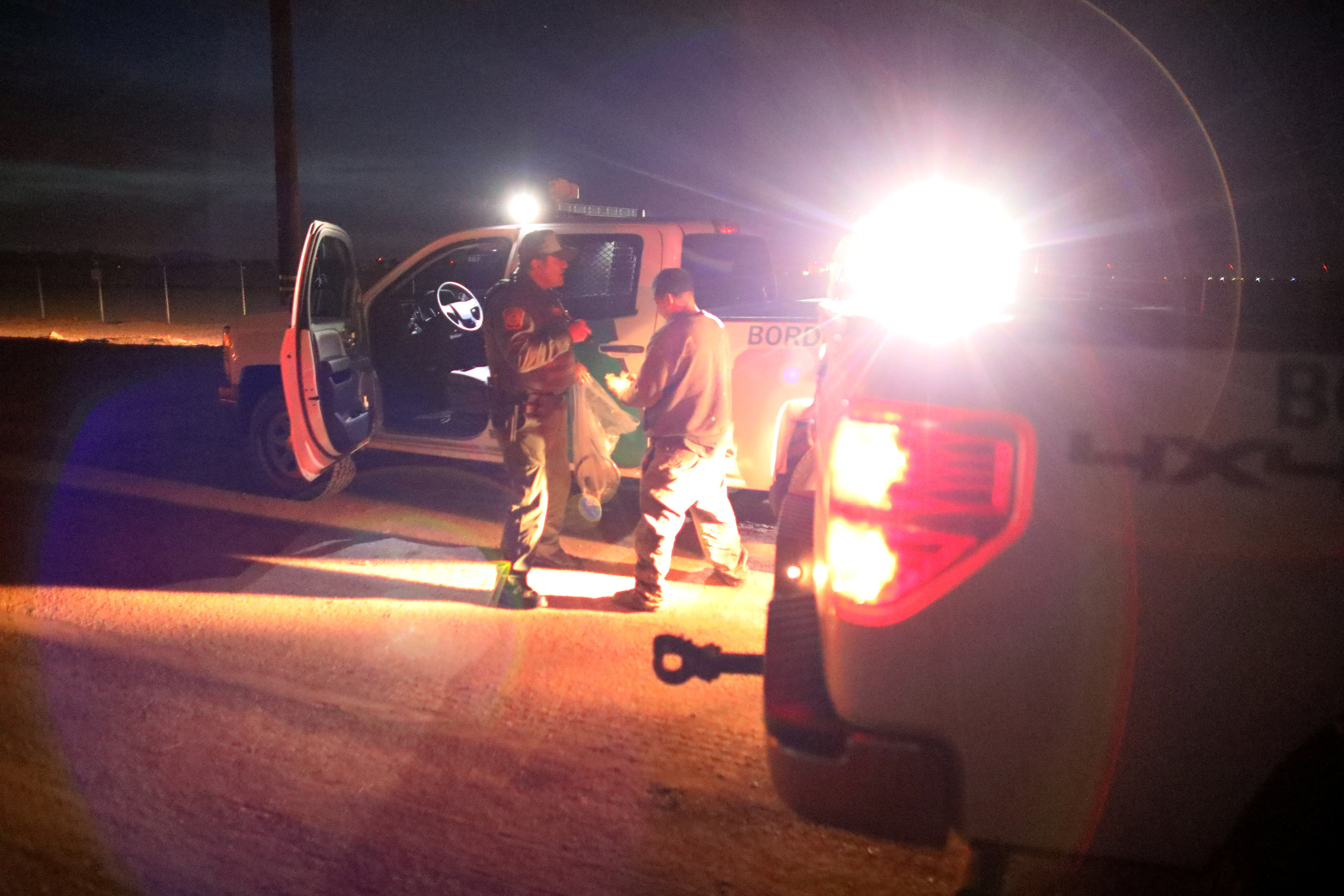 U.S. border patrol agents detain a man after he was spotted crossing illegally into the United States along the Mexican border near Calexico, California on Feb. 8. Photo by Mike Blake/Reuters 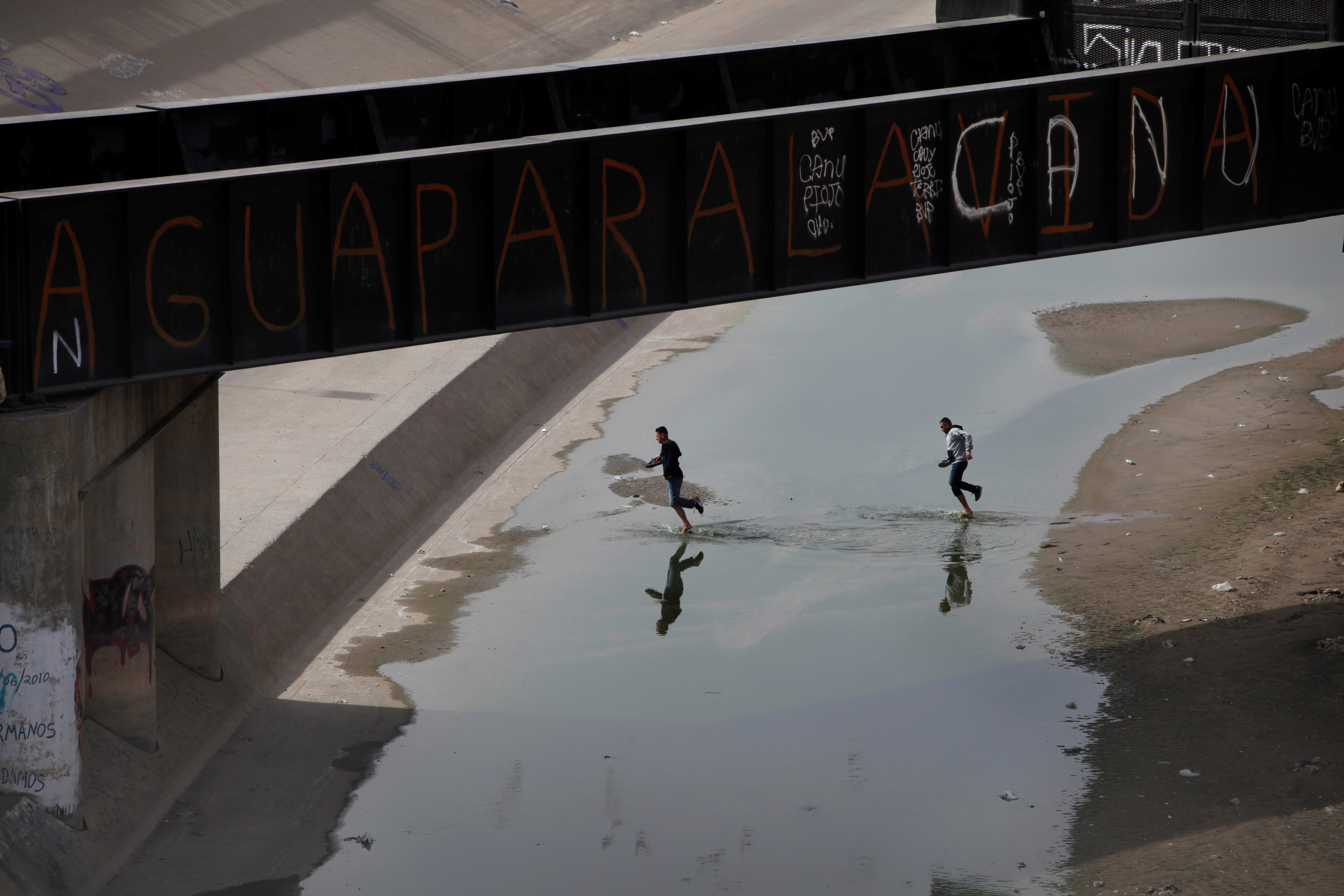 Men run along the banks of the Rio Bravo and the natural border between the U.S. and Mexico, in Ciudad Juarez, Mexico. The writing on the pedestrian bridge reads “water for life.” Photo by Jose Luis Gonzalez/Reuters 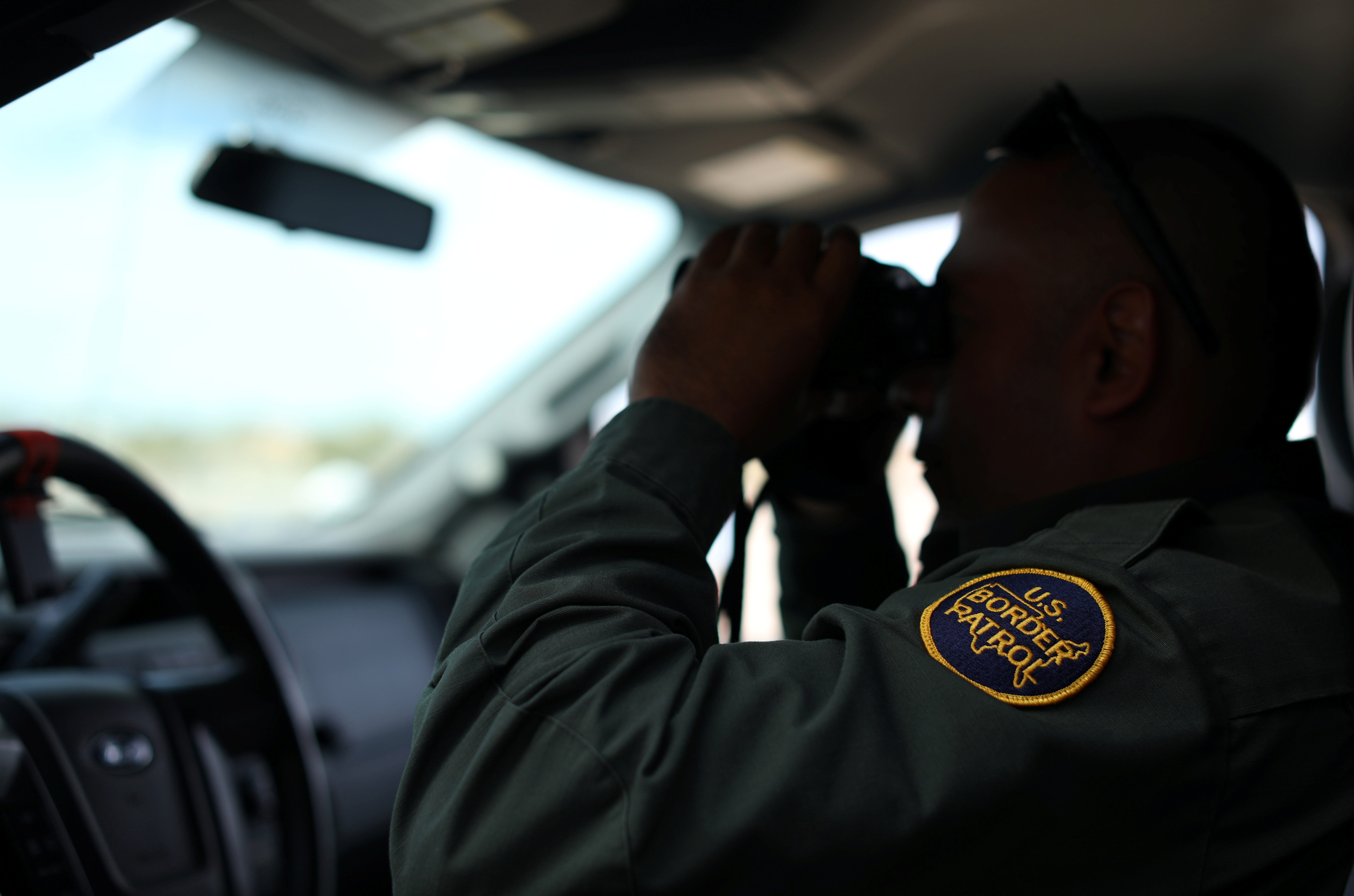 A U.S. border patrol agent keeps watch along the fence next to the Mexican border in Calexico, California. Photo by Mike Blake/Reuters 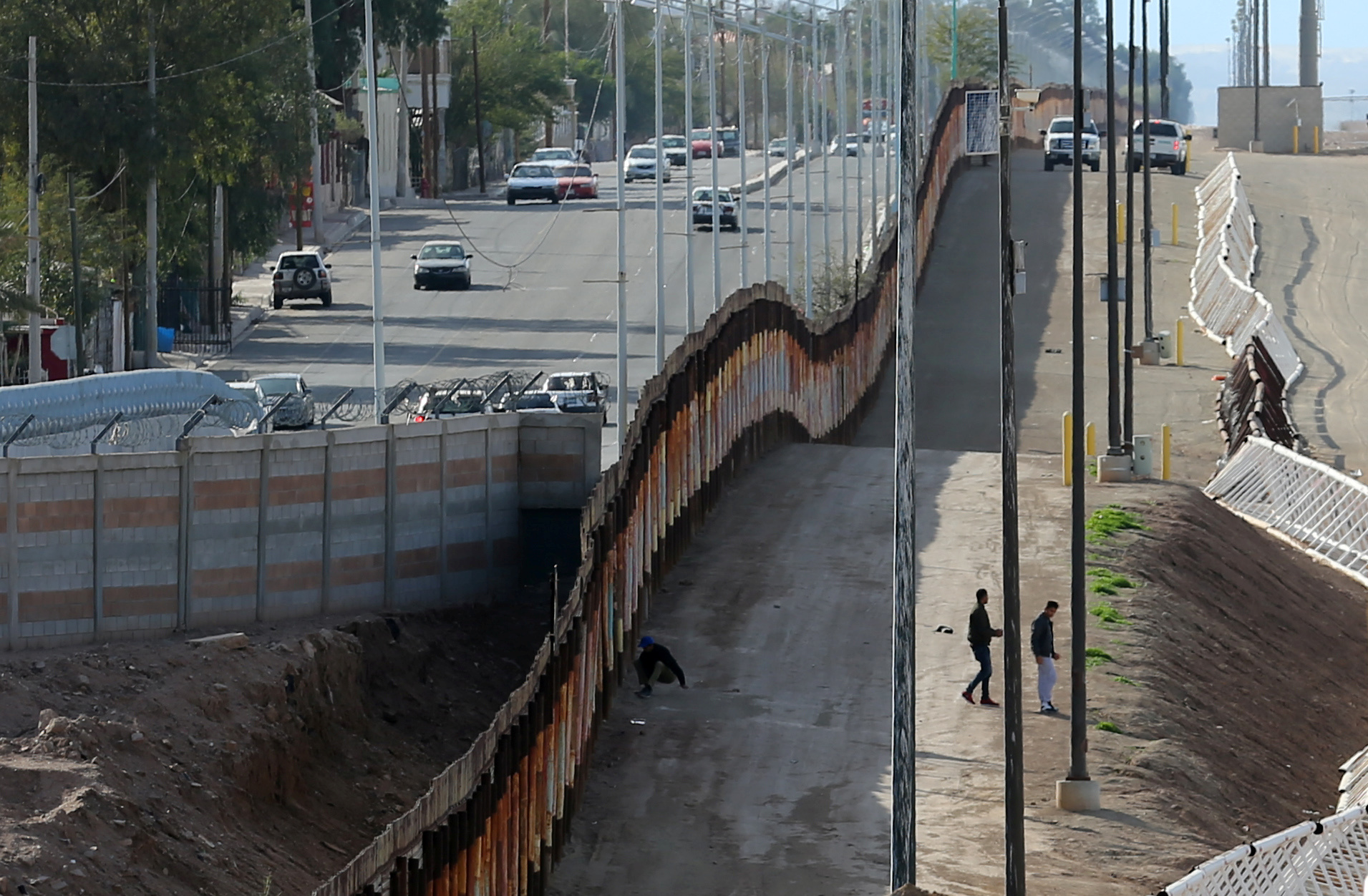 Three men jump the fence from Mexico and give themselves up to U.S. border patrol agents in Calexico, California. Photo by Mike Blake/Reuters 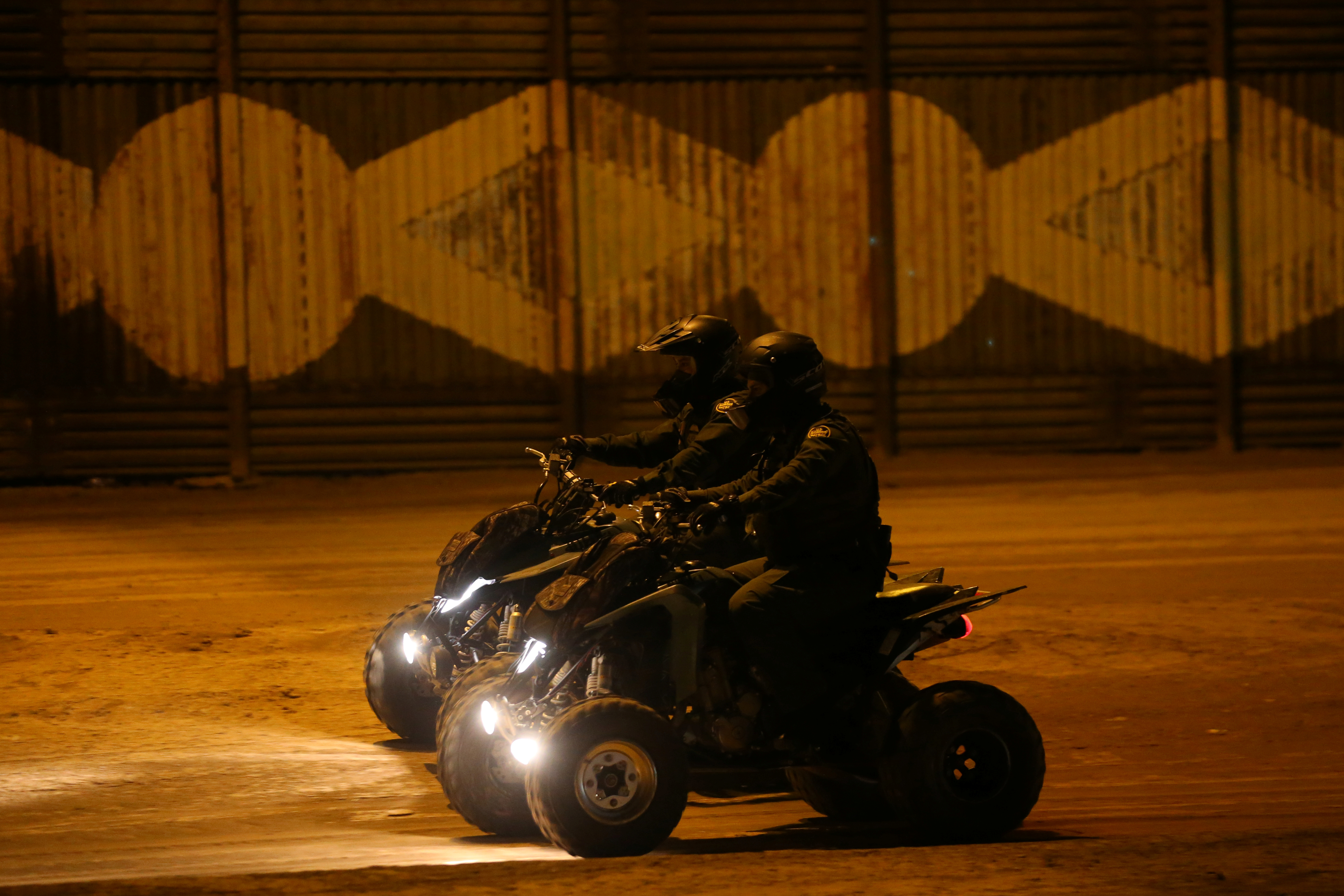 U.S. border patrol agents ride along the border wall next to Mexico in Calexico, California on Feb. 8. Photo by Mike Blake/Reuters 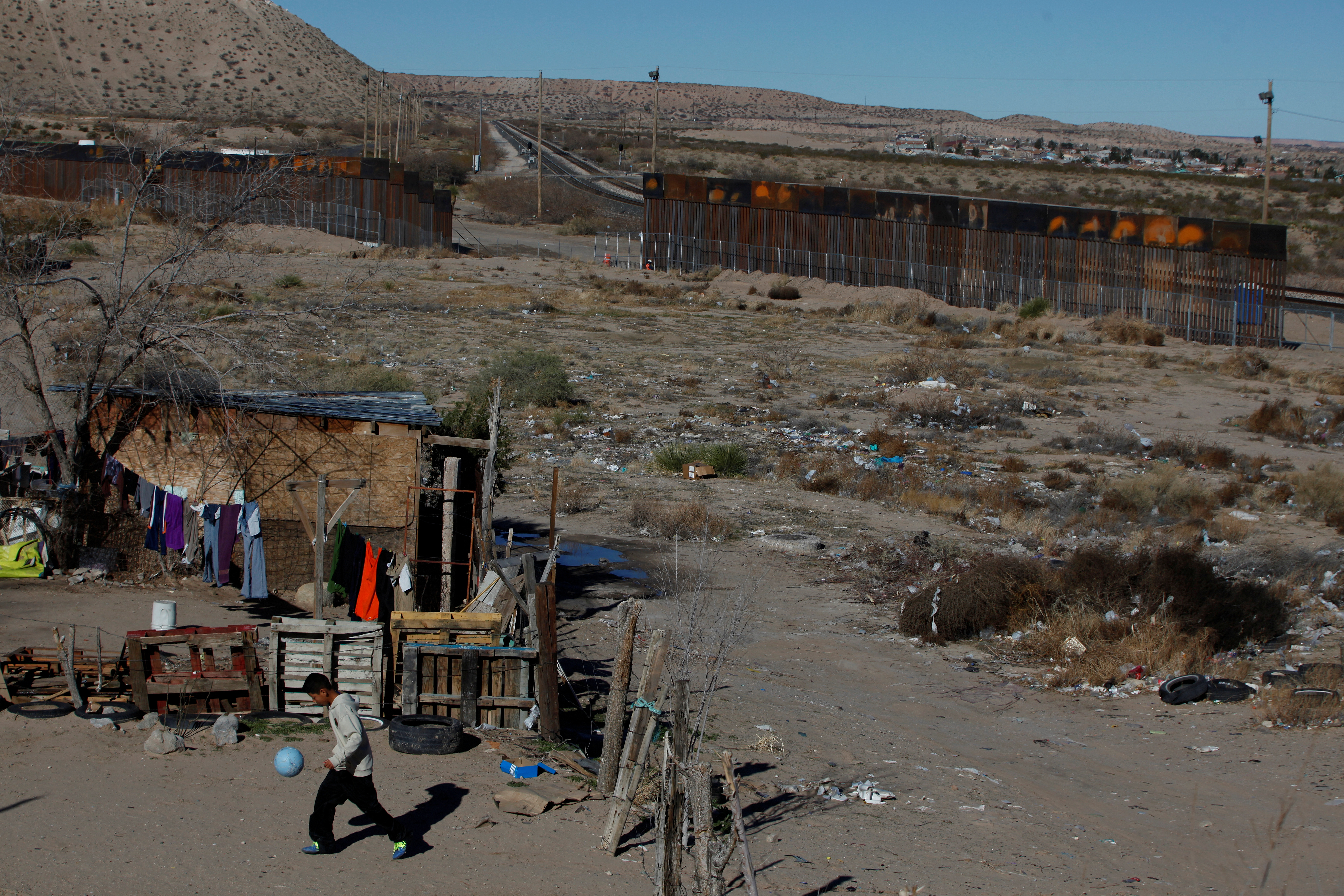 A child plays with a ball at his house along the U.S.-Mexico border fence on Jan. 25. Photo by Jose Luis Gonzalez/Reuters 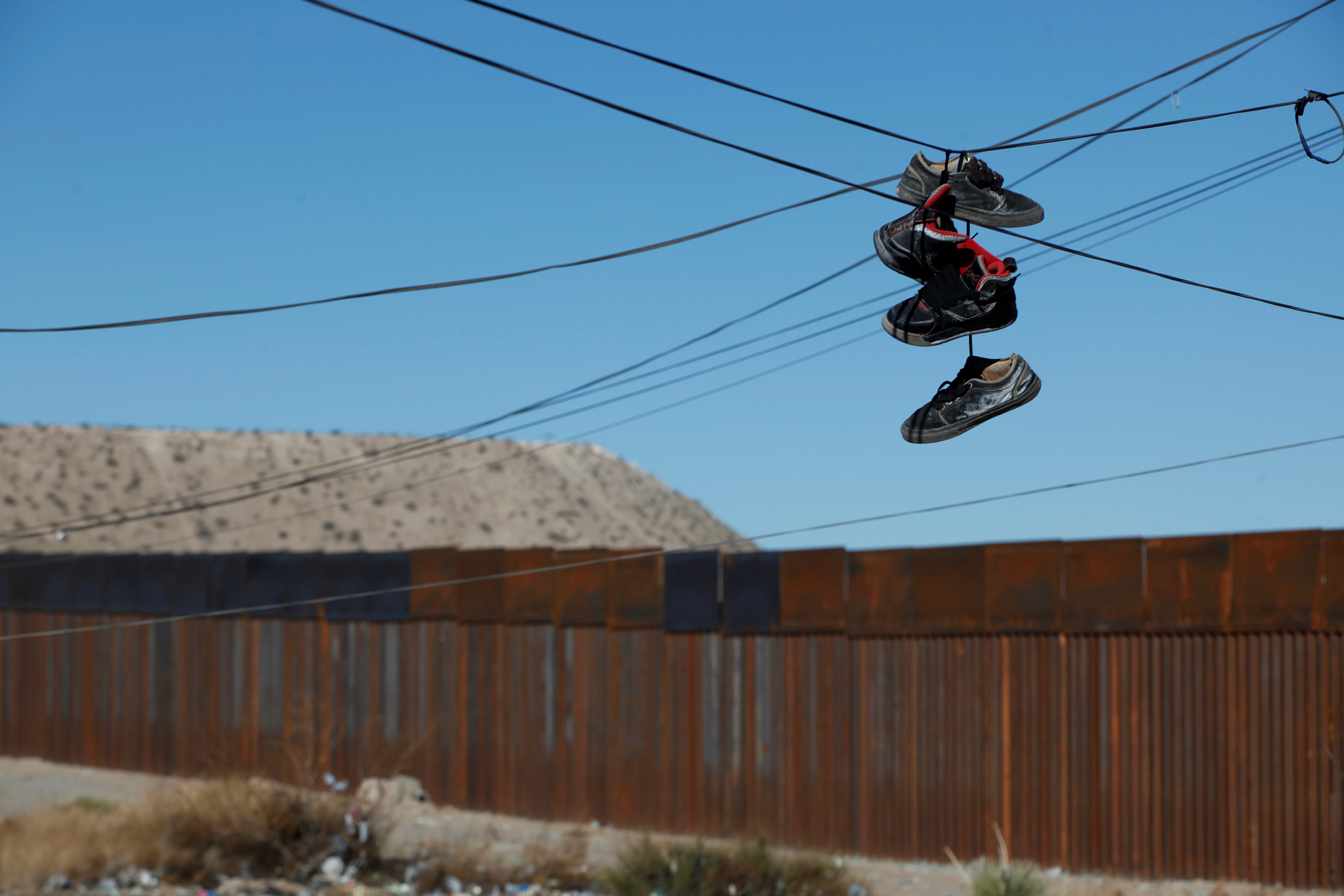 Shoes hang from a power line near the border fence in the Anapra neighborhood of Ciudad Juarez, Mexico. Photo by Jose Luis Gonzalez/Reuters 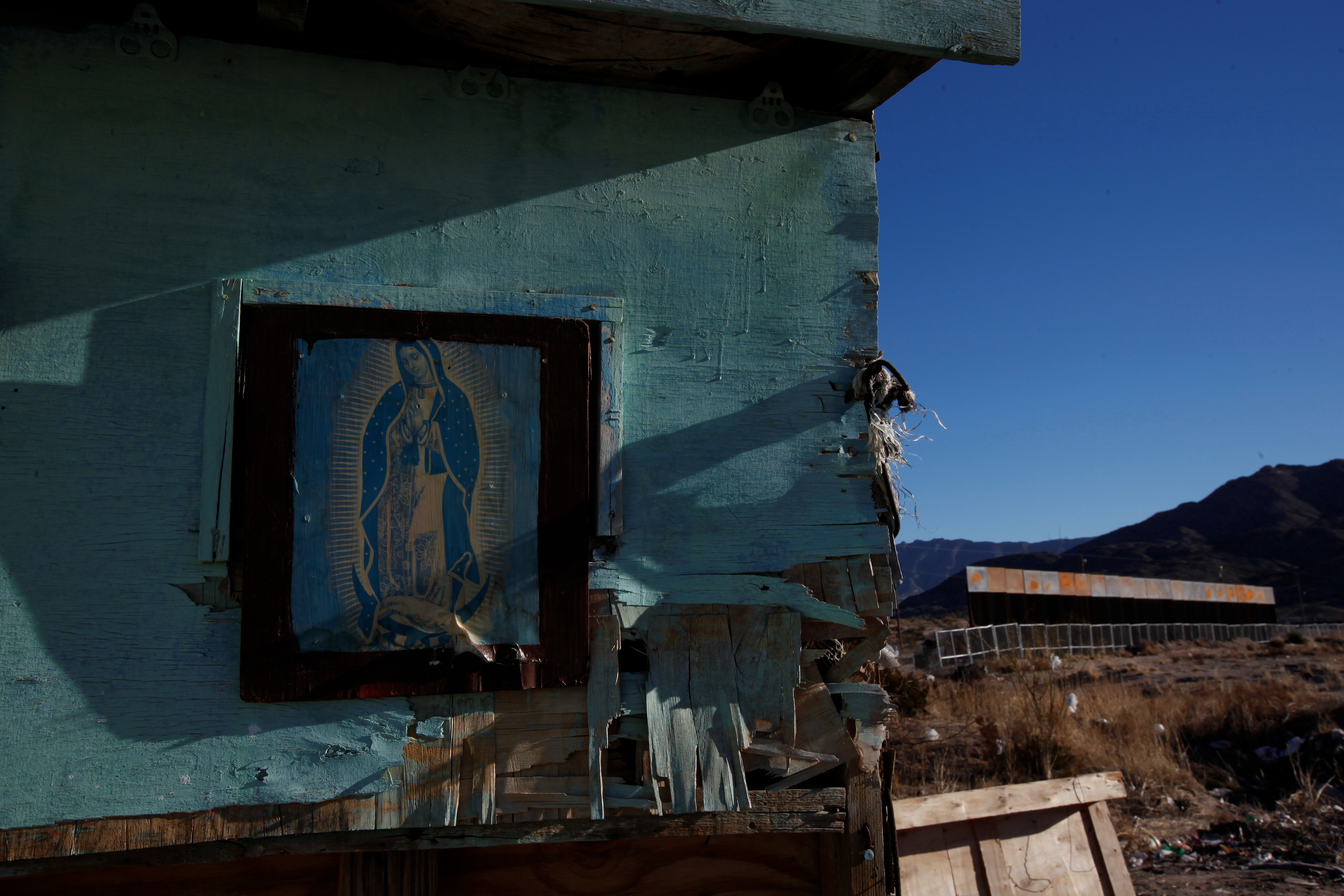 A framed picture of Our Lady of Guadalupe is seen at a house in the Mexican border town of Ciudad Juarez. Photo by Jose Luis Gonzalez/Reuters 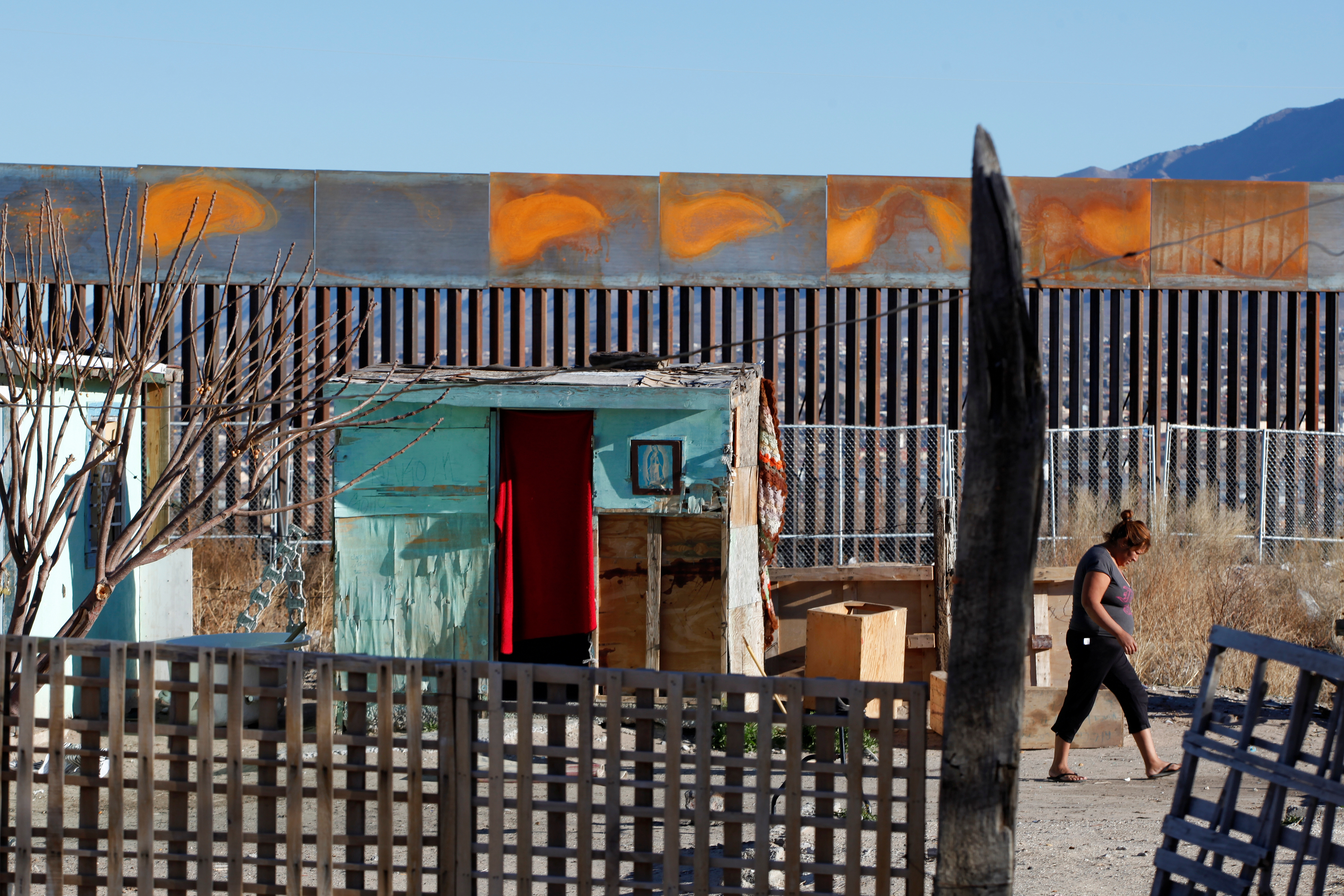 A woman walks across the patio of her house at a newly built section of the U.S.-Mexico border fence in Ciudad Juarez, Mexico. Photo by Jose Luis Gonzalez/Reuters 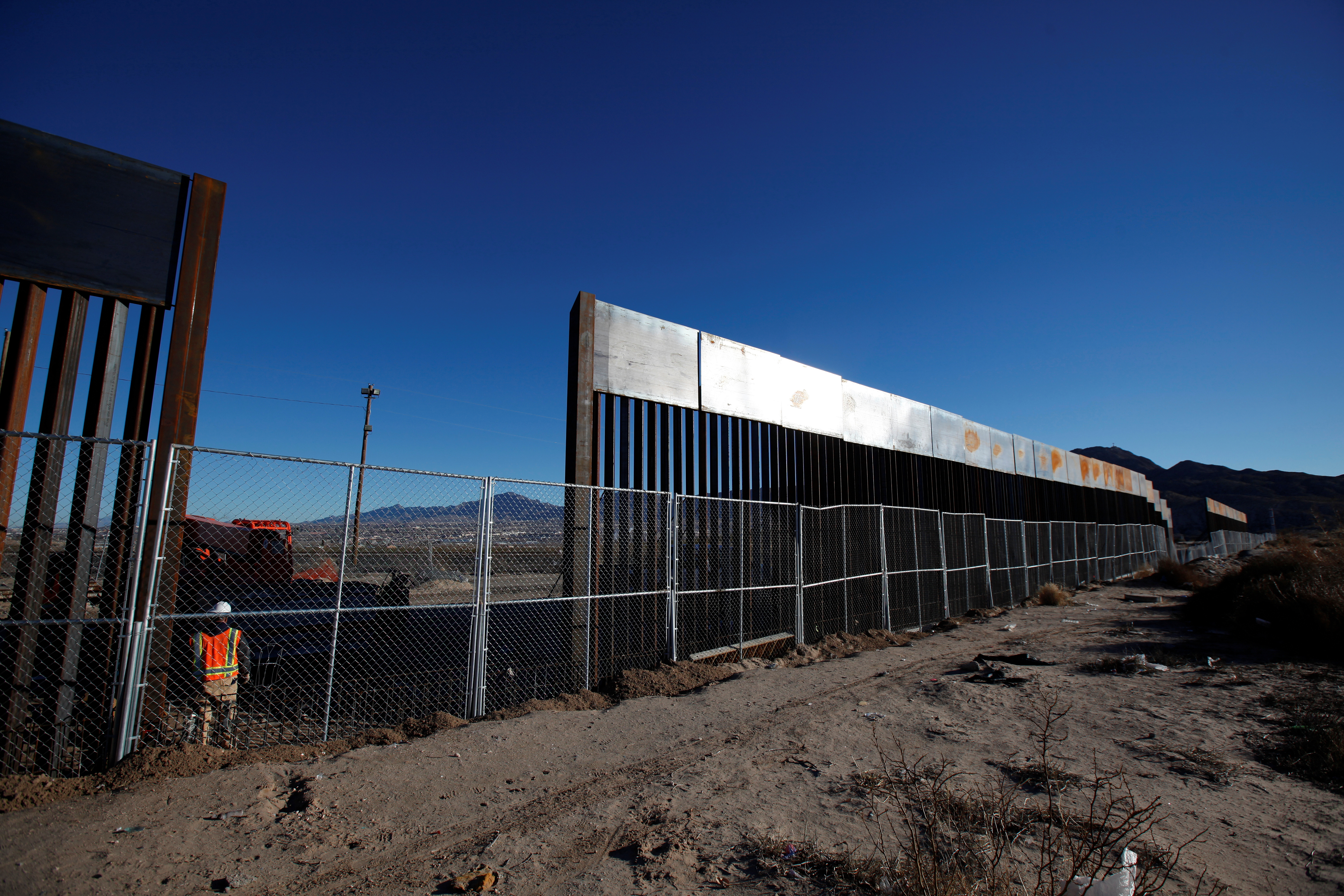 A worker stands next to a newly built section of the U.S.-Mexico border fence at Sunland Park, New Mexico, opposite Ciudad Juarez, Mexico. Photo by Jose Luis Gonzalez/Reuters 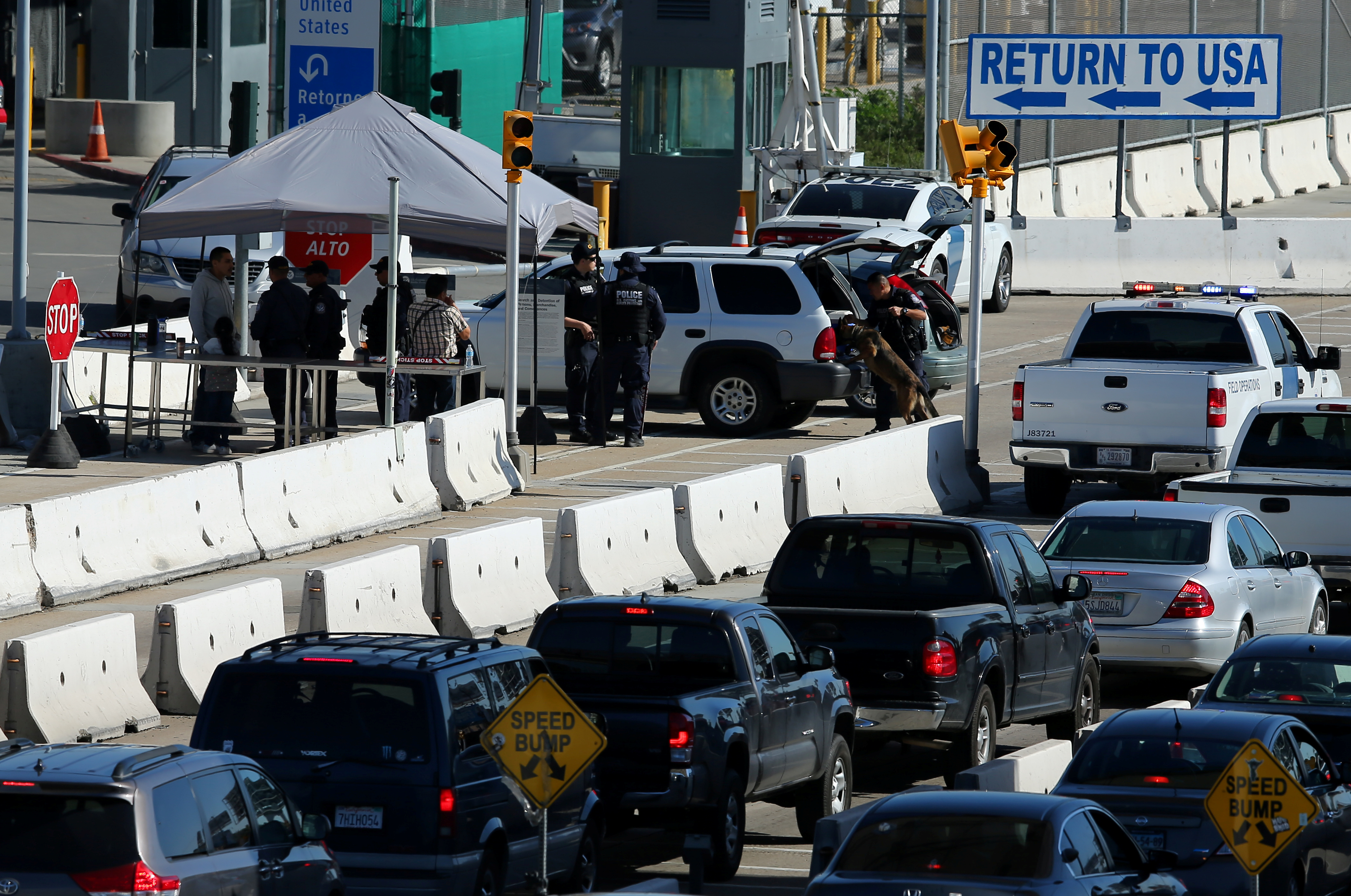 Left: A Donald Trump for President campaign sticker is attached to a U.S. Customs sign hanging on the border fence between Mexico and the United States near Calexico, California. Photo by Mike Blake/Reuters