An international court ruled Tuesday that China has no legal basis for its jurisdictional claims in the disputed South China Sea. It also said Beijing was violating the Philippines’ sovereign rights by constructing artificial islands there.

China claims most of the Spratly Islands, energy resources and surrounding waters for shipping lanes. Neighboring Brunei, Malaysia, the Philippines, Taiwan and Vietnam have claims as well. The Philippines brought the case to the International Court of Arbitration.

The court said China has no basis for claiming rights to resources within what China calls the “nine-dash line” and that it has interfered with the Philippines’ fishing rights in the area.

“The Philippines reiterates its abiding commitment to efforts of pursuing the peaceful resolution and management of disputes with the view of promoting and enhancing peace and stability in the region,” he said. 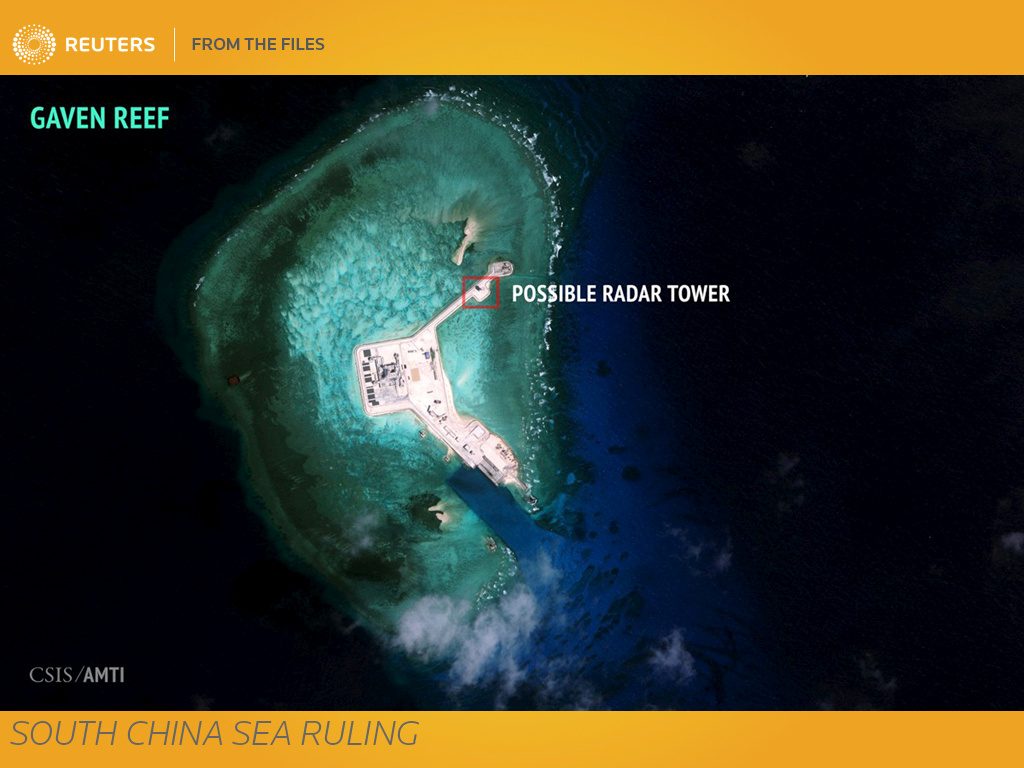 China claims some 90 percent of the South China Sea, which the Philippines challenged under a United Nations maritime convention. Image of Gaven Reef in the South China Sea by CSIS Asia Maritime Transparency Initiative/DigitalGlobe/Handout via Reuters

China did not participate in the arbitration hearings in The Hague, and the Chinese Foreign Ministry again dismissed the ruling as “null and void.”

“China’s territorial sovereignty and maritime rights and interests in the South China Sea shall under no circumstances be affected by those awards,” the ministry said in a statement. “China opposes and will never accept any claim or action based on those awards.”

The strategic waterway is used for an estimated $5 trillion in annual trade.

The U.S. State Department issued a statement from spokesman John Kirby saying, while not being able to comment yet on the merits of the case, the U.S. supports the rule of law and peaceful efforts to resolve maritime disputes.

“In the aftermath of this important decision, we urge all claimants to avoid provocative statements or actions,” he said.

Left: Activists celebrate a ruling on the disputed South China Sea by an arbitration court in The Hague in favor of the Philippines on July 12. Photo by Erik De Castro/Reuters