Military forces in Iraq are squeezing Islamic State militants hunkered down in Mosul. Even though the forces appear to be gaining ground militarily, the escaping civilian residents face a difficult path.

The oil-rich city has been in the Islamic State’s grip since June 2014. The military offensive to retake it started in earnest last October. And people are evacuating the areas of heavy fighting, sometimes with short notice.

“Very often these people are fleeing with the clothes on their backs and very little else,” said Oxfam America’s President Raymond Offenheiser, speaking from Sulaymaniyah in northeastern Iraq.

The residents can leave Mosul only by military vehicles. They go directly to a screening station to determine if they have any weapons or links to the Islamic State. When residents are brought to temporary camps, screeners again run their names through a database to see if they have any ties to the Islamic State, also known as ISIS, said Offenheiser.

The evacuees stay in tents, where they get mattresses, solar lamps and hygiene kits, he said. The World Food Program is working to provide families — both in the camps and in host communities — with food basics, including rice, wheat flour, salt, sugar and oil. With the onset of winter, aid groups are gathering blankets for them as well. 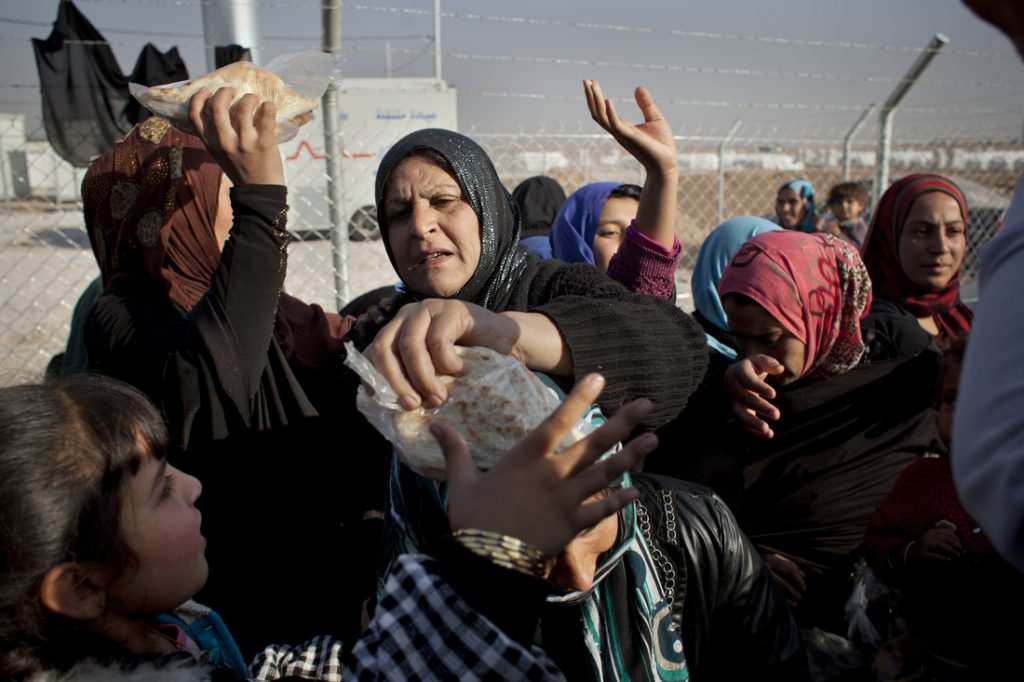 Hundreds of families from Mosul and surrounding towns started arriving at Hassansham camp daily as Iraqi forces recapture areas from the Islamic State in early November. Photo by Abbie Trayler-Smith/Oxfam

The camps, which are still being assembled, are preparing for 200,000 people. About 65,000 have arrived so far, Offenheiser said.

One family he met in a recently freed town outside Mosul had been living with the Islamic State for two years. The family told him 450 children showed up for school for the first time just this week. Their parents had been reluctant to send them to school under the Islamic State, which had imposed a strict curriculum. For example, the subjects involved pictures of guns, along with math problems with questions like, “How many people have you killed?”

It will take a while to get the teachers back, said Offenheiser, and bring the schools back to full capacity. Under the strict regime, people had little food and few options for work. Water systems were destroyed.

People were forced to go to mosque five times a day and were punished if they didn’t comply. Even if they were late, they might be lashed in the town square, Offenheiser said.

Others were executed for petty crimes, such as sneaking across the river to buy cigarettes with the intent of reselling them at home. They broke the Islamic State’s rule that no one could leave, for any reason, he added.

Further adding to the chaos, the militants have planted explosive traps for when people return home: in their ovens and under their mattresses, even inside children’s toys.

“They’ve had over two years to plan for it, and they’re bomb experts,” said NewsHour special correspondent Jane Ferguson by phone from Erbil in northern Iraq. 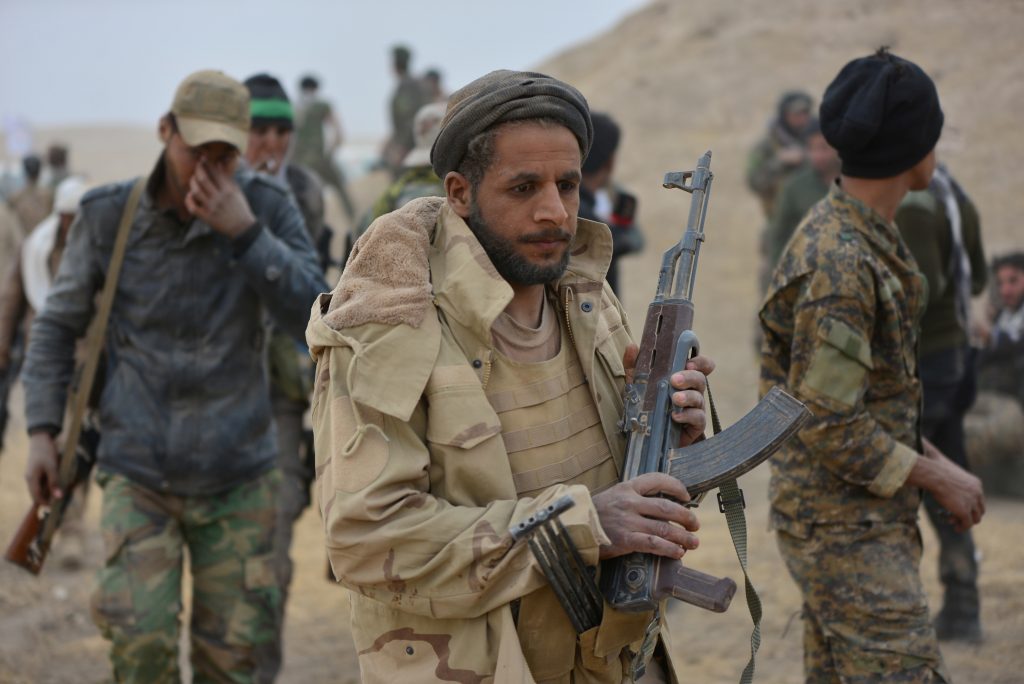 It not only sows terror but is meant to slow the advancing troops, said Ferguson. She spoke with an Iraqi soldier who lost his eye while trying to remove a bomb. The militants expect the soldiers to inspect homes, and it’s another way to inflict casualties, she said.

The booby traps are slowing returning civilians, as is another problem: As the military advances, and ousts Islamic State fighters, they’re leaving behind ghost towns, Ferguson said. The plan was for local police to remain in the recently liberated areas and patrol the streets — only there haven’t been enough available blue-uniformed police to do the job.

“The areas behind the front lines are eerily unoccupied,” she said. “As [forces] move forward, the ability to occupy, search and hold the ground is going to become increasingly challenging to them.” 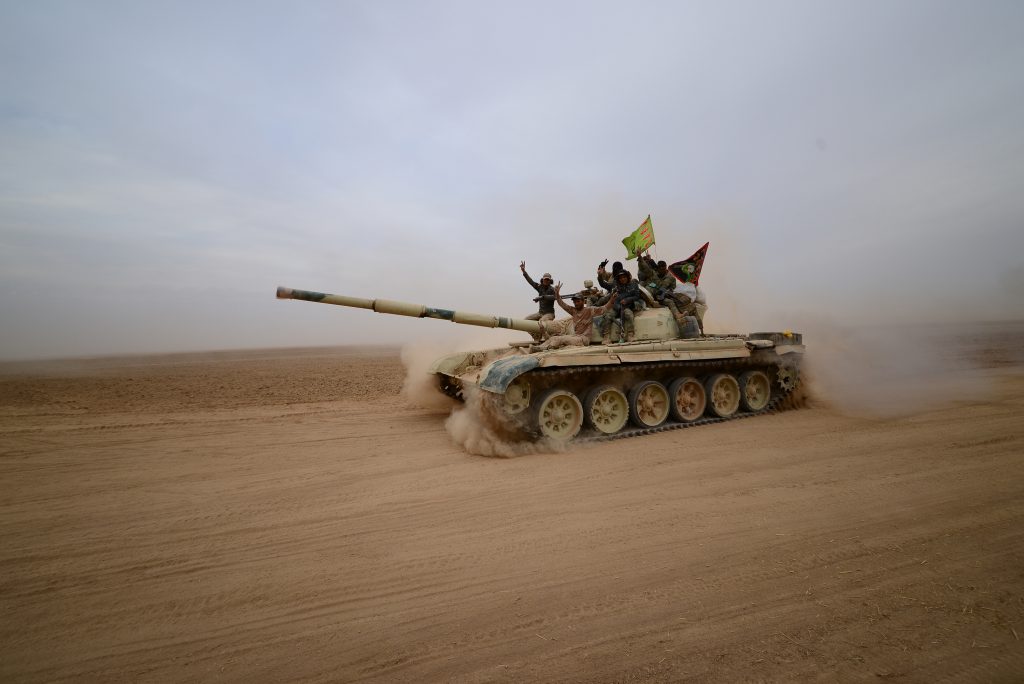 Shiite fighters ride on a tank heading toward the airport during a battle with Islamic State militants in Tal Afar. Photo by a Reuters stringer

Also, Ferguson observed another potential problem: Iraqi military forces are driving vehicles into towns populated mostly by Sunni Muslims — displaying the Shia flag. “If this becomes seen as a conquest of them as a Sunni people, you’re back to square one,” she said.