Updated Jan. 29: The Senate confirmed Kerry as the next secretary of state in a 94-3 vote. (The video is of his full confirmation hearing.)

Sen. John Kerry, D-Mass., President Obama’s choice for secretary of state, answered a range of questions from Iran’s nuclear program to opportunities in Latin America at his confirmation hearing Thursday, but the theme clearly was how he would build upon the policies and vision of the Obama administration.

For example, on Iran’s assertions that its nuclear program is for civilian energy purposes, he said, “President Obama has stated again and again, he prefers a diplomatic resolution to this challenge, and I will work to give diplomacy every effort to succeed. But no one should mistake our resolve to reduce the nuclear threat.” (Read Kerry’s full statement.)

When questioned further about Iran, he said, “It is not hard to prove a peaceful program. Other nations have done it.”

In terms of working with Latin American countries, Kerry said the United States has provided development assistance in Guatemala and entered energy agreements with Brazil. It’s worked with Mexico on anti-narcotics and anti-violence programs. But some outlier states are not as cooperative, he said, namely Venezuela, though he said a transition in leadership might change that.

He added, when asked by Sen. Barbara Boxer, D-Calif., that he would continue Secretary of State Hillary Clinton’s work to champion the rights of women and girls in Latin America and elsewhere.

“There is a monumental transformation taking place” in the region, said Kerry. “This is the biggest upheaval in that part of the world since the Ottoman Empire.” He said he wanted to sit down with the committee and further discuss the U.S. role not only there but in other regions of the world.

Domestic issues also came up at one point. Sen. Ron Johnson, R-Wis., asked if Kerry planned to use his position of secretary of state to press for a resolution to the United States’ economic issues. Kerry said he would weigh in if people would listen, but “It requires some compromise and reasonableness on everybody’s part.”

On Syria, Kerry said, “We need to change President Bashar al-Assad’s calculation.” Assad thinks he’s winning, so does the opposition, which doesn’t lend itself to preparing for a transition, he said.

Sen. John McCain, R-Ariz., dug into the Syria issue: “I think we need to tell the Syrian people either we’re going to help them or we’re not. We’ve had a lot of conversations and hearings, but we haven’t done a whole lot.”

Kerry said he agreed with the sense of urgency but any move by the United States would need to take into account whether it would make the situation better and what the costs would be.

McCain also raised the comments Clinton made to the committee on Wednesday about the attack on the U.S. consulate in Benghazi, Libya. “Americans do care” that four Americans were killed, he said. “We were misled when we still haven’t gotten answers why there wasn’t better security at the consulate … or told there was request for a 16-member security force to stay at the consulate but were removed.”

Kerry said, “I don’t believe Secretary Clinton was saying people don’t care,” but that he also understood his role as secretary would be to help Congress get answers — “I will do that and I hope we can do that in a non-contentious way.”

In general, the tone was cordial throughout the hearing, with members on both sides of the aisle saying they were looking forward to working with Kerry in his new capacity. At one point, Sen. Robert Menendez, D-N.J., who was presiding over the hearing, accidentally called Kerry “Mr. Secretary” then chuckled and said he was being “clairvoyant.” 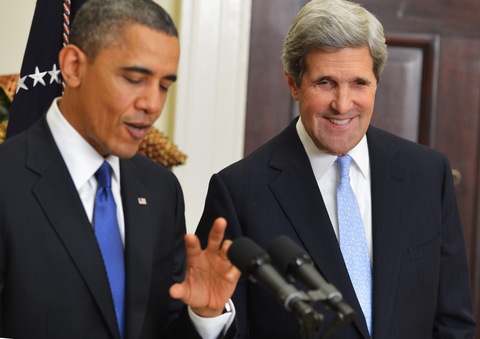 On Thursday morning, Sen. John Kerry, D-Mass., returns to the Senate Foreign Relations Committee that he chaired, but this time he’ll be sitting in front of the dais and answering senators’ questions at his confirmation hearing as secretary of state.

President Obama picked the Massachusetts senator and former presidential candidate to replace current Secretary of State Hillary Clinton after his apparent first choice, U.S. Ambassador to the U.N. Susan Rice, caught flak for telling media outlets the deadly assault on the U.S. consulate in Benghazi, Libya, on Sept. 11 was a spontaneous protest and not a premeditated siege by militants, as was later determined.

Secretary Clinton answered questions in the Senate and House Wednesday about the attack and Rice’s comments about it. (Watch highlights of Clinton’s testimony.)