Secretary of State John Kerry on Friday called Russian attempts to interfere in the U.S. election a “hostile act,” though he would not speculate on other reports that senior Russian officials celebrated President-elect Donald Trump’s win.

And on the war in Syria, Kerry said while it was a profound failure on the part of the international community, it was not a U.S. failure alone.

“We brought Iran to the table, we brought Russia to the table. We had assurances that (Syrian President Bashar) Assad would do certain things, and he didn’t,” Kerry told the PBS NewsHour’s Judy Woodruff. “He chose not to, so the Russians failed, actually, to deliver Assad in the way that they said he would.”

He went on to say that history will debate the choices made, “but I don’t think it falls exclusively on us that this problem hasn’t been solved.”

Meanwhile, a classified intelligence report issued Friday confirmed Russian interference in the U.S. election. “It has serious consequences, and we’re going to have to work that through,” Kerry said.

Trump, who has been skeptical of the intelligence community’s assessment thus far, met earlier in the day with Director of National Intelligence James Clapper, CIA Director John Brennan and FBI Director James Comey in New York.

Before being briefed, Trump told The New York Times that the focus on hacking was a “witch hunt.” After the briefing, he said the meeting was “constructive” and emphasized he had tremendous respect for the intelligence community. He also reiterated that any attempted cyber-influence had no effect on the election.

“While Russia, China, other countries, outside groups and people are consistently trying to break through the cyber infrastructure of our governmental institutions, businesses and organizations, including the Democratic National Committee, there was absolutely no effect on the outcome of the election, including the fact that there was no tampering whatsoever with voting machines,” Trump said. “There were attempts to hack the Republican National Committee, but the RNC had strong hacking defenses and the hackers were unsuccessful.”

Kerry called U.S. relations with Russia “complicated” and said that both nations have a track record of working together on issues such as removing chemical weapons from Syria and on the Paris climate change agreement.

But on other issues, such as the separatist movement in Ukraine, the two countries are far apart, Kerry said. “My hope is the next administration will approach Russia strategically with a clear purpose of trying to find more common ground but without giving up on fundamental values and principles that are at the core of the United States foreign policy.”

Kerry told the PBS NewsHour he plans to sit down with Tillerson next week to discuss key foreign policy issues. 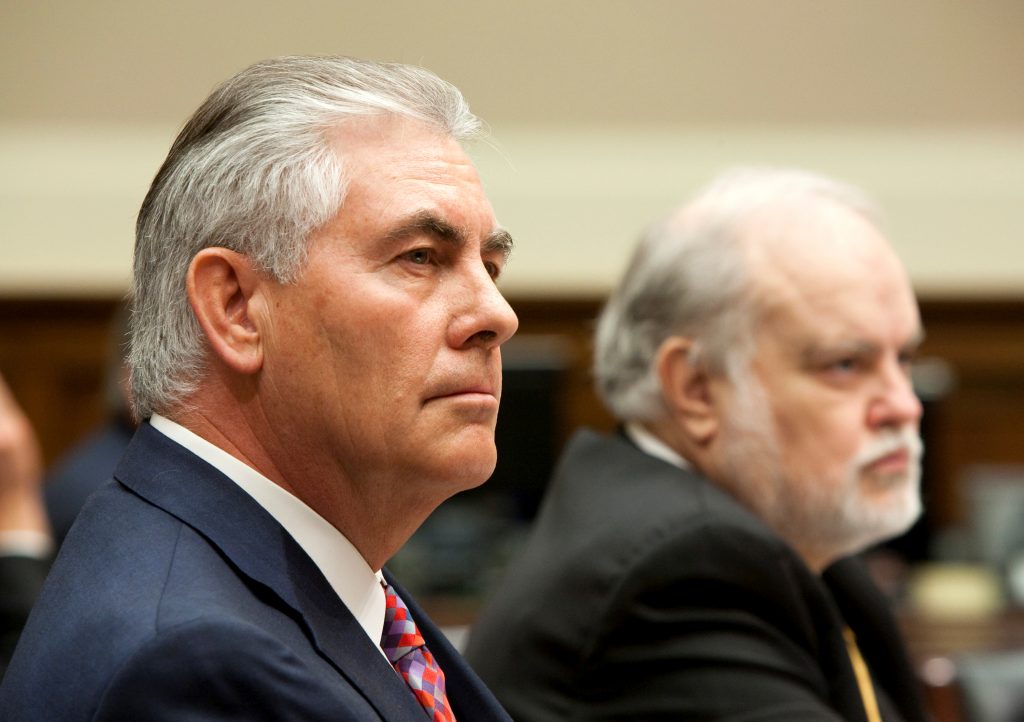 The secretary of state would not disclose the exact issues he plans to discuss.

But there are a number of issues on which Tillerson could reverse course from Obama administration policies.

For one, foreign policy watchers have criticized Tillerson for his ties to Russia. The oil executive conducted extensive business in the country for Exxon, and Putin awarded him the Order of Friendship in 2012. Others have come to Tillerson’s defense, saying his vast knowledge of Russia could be a major asset.

Kerry, in contrast, has sparred with Russia on a range of issues, from the annexation of Crimea to Russia’s support for Assad in Syria’s ongoing civil war.

If confirmed, Tillerson could also represent a break from Kerry on another key issue: climate change.

Kerry worked on climate change issues throughout his Senate career, and as secretary of state pushed for the Paris climate agreement, a major international accord aimed at curbing global greenhouse gas emissions.

Tillerson has said he supports the pipeline, and has spent the past decade at the helm of the world’s largest oil and gas company.

Exxon said earlier this week that if Tillerson, who stepped down as CEO on Jan. 1, is confirmed, the company would place an exit package of 2 million shares — worth roughly $181 million — in a blind trust. Tillerson has also said he would sell his current shares in the company.

Kerry joined the Obama administration in 2013, replacing Hillary Clinton after she stepped down as secretary of state.

Before taking the top job at the State Department, Kerry served in the U.S. Senate for 28 years, including as chairman of the Senate Foreign Relations Committee. Kerry was the Democratic presidential nominee in 2004, losing a close election to President George W. Bush.

Kerry has not announced exactly what he will do after leaving the Obama administration, but he said he plans to continue in public service.

You can watch Judy Woodruff’s full interview with Secretary of State John Kerry on Friday’s broadcast.