U.S. Ambassador to South Korea Mark Lippert was attacked in Seoul on Thursday by a man wielding a 10-inch knife, who managed to slash his face and wrist before being wrestled to the ground.

Lippert, 42, was attending a breakfast meeting of the Sejong Cultural Institute in the center of the South Korean capital. He was taken to a hospital and received 80 stitches to his face.

The assailant, who identified himself at the scene as Kim Ki-jong after being subdued and arrested, was protesting joint U.S.-South Korea military drills, said Jongno Police Station chief Yun Myeong Seong at a televised briefing. 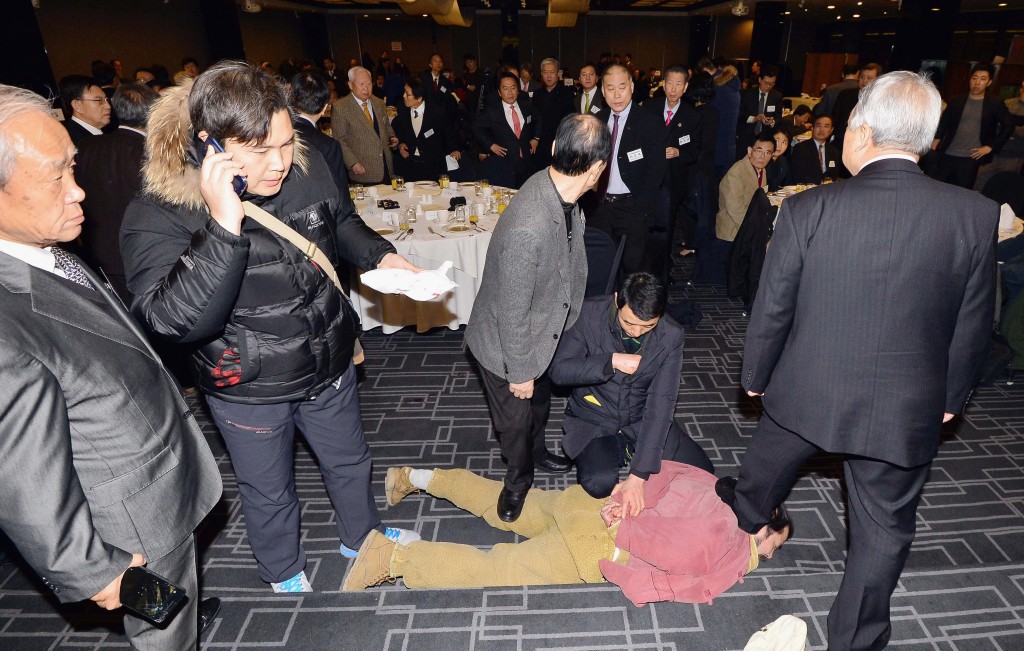 Kim reportedly said during the attack, “South and North Korea should be reunified.” The U.S.-South Korean military drills are viewed by North Korea and its allies as preparation for an invasion.

Lippert tweeted that he would be back in action soon:

Doing well&in great spirits! Robyn, Sejun, Grigsby & I – deeply moved by the support! Will be back ASAP to advance US-ROK alliance! 같이 갑시다!

The State Department issued a statement saying U.S. law enforcement is working with the Korean National Police on the incident. “The U.S.-ROK (Republic of Korea) alliance is strong; we will not be deterred by senseless acts of violence,” said the department’s deputy spokeswoman Marie Harf. Follow @NewsHourWorld

Left: U.S. Ambassador to South Korea Mark Lippert was attacked by a man with a razor blade while giving a lecture in Seoul on March 5, 2015. Photo by The Asahi Shimbun via Getty Images