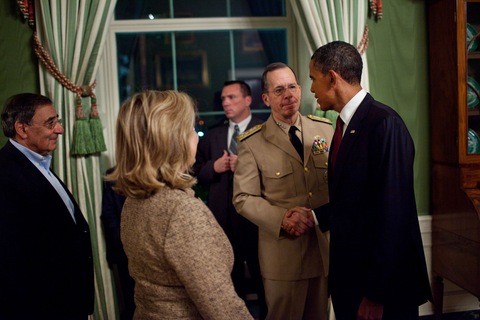 In a newsmaker interview with Jim Lehrer on Tuesday, CIA Director Leon Panetta describes the final tense seconds of the commando raid on the compound housing Osama bin Laden in Pakistan — and the culmination of a nearly 10-year manhunt.

Panetta told Lehrer neither he nor President Obama watched the actual shooting of bin Laden as it happened. Panetta spoke from CIA headquarters about the military intelligence operation that led to the al-Qaida leader’s death.

“Once those teams went into the compound, I can tell you that there was a time period of almost 20 or 25 minutes that we really didn’t know just exactly what was going on. There were some very tense moments as we were waiting for information. But finally Adm. (William) McRaven came back and said he had picked up the word ‘Geronimo,’ which was the code word that represented they got bin Laden,” he said.

When Lehrer asked if bin Laden said anything to the commandos, Panetta said: “To be frank, I don’t think he had a lot of time to say anything.”

Lehrer also asked about the uncertainty surrounding whether bin Laden was actually in the compound and whether he fired back at the Navy SEALs. The full interview airs Tuesday on the NewsHour.