U.S. Ambassador to Libya Chris Stevens said in a video introducing himself to the Libyan people in May that he was “excited” to take up his post in the country and to help Libyans “achieve your goals.”

Stevens, 52, and three other American embassy workers, including Sean Smith, a husband and a father of two, were killed Tuesday when their vehicle was hit by a rocket-propelled grenade by protesters angered by an amateur film denigrating the religion of Islam. Stevens and his team were heading to the U.S. consulate in Benghazi to help evacuate employees under fire from the protesters. 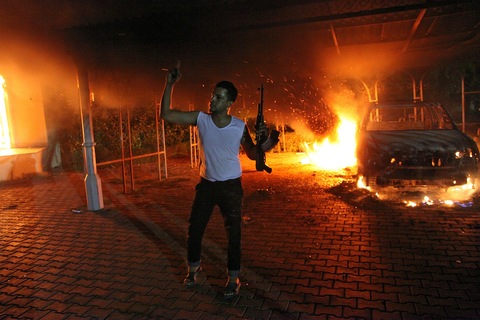 An armed man outside the U.S. consulate in Benghazi after protesters set it ablaze Tuesday night. Photo by AFP/Getty Images.

Updated at 11:30 a.m. ET with video of President Obama and Secretary of State Hillary Clinton’s statements:

“The United States condemns in the strongest terms this outrageous and shocking attack,” said President Obama on Wednesday. “Stevens was a role model to all who worked with him.” The president said the United States will work with the Libyan government to bring the perpetrators to justice:

“This is an attack that should shock the conscience of people of all faiths around the world,” said Clinton. She called it the work of “a small and savage group, not the people or government of Libya”:

Protesters also stormed the American Embassy in Cairo, Egypt, over the low-budget American-made Internet video, called “Innocence of Muslims”, which makes fun of the Prophet Mohammed and portrays Muslims as violent and immoral.

In his introductory video taped in May, Stevens says: “I had the honor to serve as the U.S. envoy to the Libyan opposition during the revolution, and I was thrilled to watch the Libyan people stand up and demand their rights. Now I’m excited to return to Libya to continue the great work we’ve started, building a solid relationship between the United States and Libya, to help you, the Libyan people, achieve your goals.”

He explains that he grew up in California without knowing much about the Arab world until he went to North Africa as an English teacher with the Peace Corps and “quickly grew to love this part of the world.”

A Marine Corps anti-terrorism team is heading to Tripoli to help secure the embassy there. And a military contingent will retrieve the bodies of those killed in Benghazi.