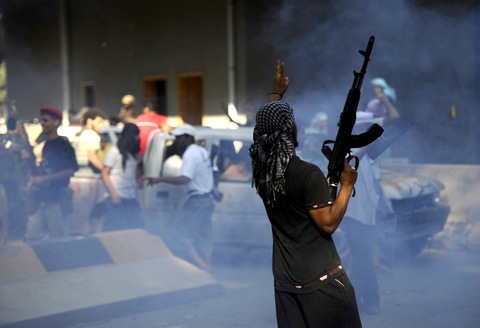 Libyan rebels celebrate inside a captured military base near Tripoli. Photo by Filippo Monteforte/AFP/Getty Images

Updated 10:30 p.m. ET | President Obama issued a statement Sunday night saying the regime of Moammar Gadhafi should come to an end, and recognizing the Transitional National Council as the legitimate governing authority in Libya.

“Gadhafi needs to acknowledge the reality that he no longer controls Libya. He needs to relinquish power once and for all,” President Obama said. “The future of Libya is now in the hands of the Libyan people.”

After making a series of strategic gains including the capture of a military base over the weekend, rebels in Libya appeared on Sunday night to be securing portions of the capital Tripoli and choking off routes from pro-Moammar Gadhafi forces.

The embattled leader of Libya made an audio statement on state television, urging his followers in Tripoli to stay strong. “We cannot go back until the last drop of our blood. We will defend the city. I am here with you,” said Gadhafi. “Go on, go forward!”

After gaining control of the western town of Zawiyah on Thursday, the rebels pushed toward Tripoli about 30 miles away and made rapid gains. They captured a military base and Khamis Brigade located on the outskirts of the city, taking truckloads of weapons and ammunition.

As one contingent of rebel forces arrived from the west, another set up checkpoints in the eastern suburbs of the city, reported the BBC.

Associated Press reporters traveling with the fighters as they entered from the west said they met with little resistance along the way.

Rebels raised the Libyan independence flag over mosques and government buildings in parts of the city they had overtaken. Al Arabiya television showed civilians celebrating in the center of the city and tearing down posters of Gadhafi.

But fighting was still continuing between the two sides throughout the day with gunfire reported in certain areas. A rebel activist said pro-Gadhafi forces placed snipers on rooftops around Gadhafi’s compound and on a nearby water tower.

State Department spokeswoman Victoria Nuland said Secretary of State Hillary Clinton and President Obama were being kept abreast of the fluid developments. “Gadhafi’s days are numbered,” said Nuland, the Washington Post reported. “If Gadhafi cared about the welfare of the Libyan people, he would step down now.”