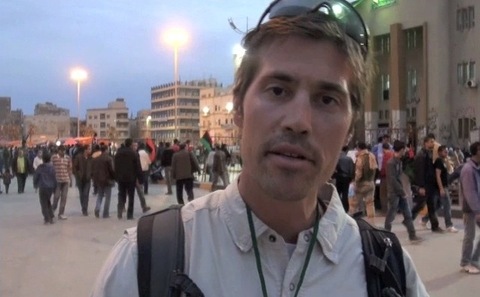 Image of James Foley working in Libya courtesy of GlobalPost

GlobalPost freelance contributor James Foley and three other foreign journalists were released Wednesday from a detention facility in Libya, where they had been held for over a month for working in the country without a visa.

Foley, along with Claire Morgana Gillis, a freelancer for The Atlantic and USA Today, and Spanish reporter Manu Brabo, were captured by forces loyal to Moammar Gadhafi on April 5 while they were reporting near Brega on the fighting between rebel and government forces.

Foley called his mother in New Hampshire, saying all four were at the Rixos Hotel in Tripoli and were in good condition. He said he “just wanted to get home.”

Another journalist, photographer Anton Hammerl, who has South African and Austrian citizenship, was picked up with Foley, Gillis and Brabo, but his whereabouts are still unknown.

GlobalPost reporter James Foley and three other foreign journalists held in Libya since April 5 have appeared before a judge in an administrative court and will be released this week, a government spokesman told an Associated Press reporter in Tripoli.

Spokesman Moussa Ibrahim named Foley, Claire Morgana Gillis, a freelancer for The Atlantic and USA Today, and Spanish reporter Manu Brabo. The AP said it was not immediately clear who the fourth journalist was.

Photographer Anton Hammerl, who has both South African and Austrian citizenship, was picked up by Libyan forces with the others outside the city of Brega, but his whereabouts have been unclear ever since.

Ibrahim said the journalists were being held in the Tripoli detention facility on charges they “entered the country illegally,” suggesting they had not received work visas before entering Libya.

A visitor able to see Foley and Gillis earlier in the month said they were being treated well.