What is it like to be a Muslim at a Baptist university?

Lama Zakzok, a 20-year-old anthropology major at Baylor University in Waco, Texas, says when people learn she’s Muslim, the conversation can go one of two ways.

“Either they’ll say ‘that’s so cool,’ and they’ll ask me questions about it. Or I’ll get a cold shoulder and the conversation ends abruptly,” the Austin, Texas, native said.

One particular encounter has stuck with her. A girl asked how she felt about ISIS, the shortened name for Islamic State militants, being “one of you guys.” “That bothered me more than anything I’ve ever heard. They’re not one of us. They don’t practice the faith that we practice. They have this convoluted version of it.”

Zakzok said it comes down to a lack of information. “A lot of people have either never met a Muslim or they’ve only seen a Muslim through the eyes of the media. … A lot of people don’t even understand that ‘Allah’ means ‘God,’” she said.

Students at Baylor, a private Baptist university, can attend interfaith prayers if they want, and there are more than 20 religious student organizations on campus.

Zakzok would like to add one more organization to the list: Project Nur, a student-led initiative meant to build acceptance for Muslims and prepare future leaders in social justice.

“It was amazing for us to see something like this (outpouring of support) in Waco, because we just never thought Waco would be that kind of place, especially with our minuscule Muslim community.” — Lama Zakzok, student

Project Nur, which has 74 chapters on college campuses around the country, is an offshoot of the American Islamic Congress. AIC aims to counter negative stereotyping of Muslim Americans following the Sept. 11, 2001, terrorist attacks in the U.S. Project Nur is designed to get youth involved.

The group again saw misunderstandings about Muslims and Islam arise more recently during the 2016 presidential election. In response, Project Nur launched the Manara Campaign in recognition of the challenges Muslims face and the continued need for conversation and accurate information about Islam.

Manara — meaning “lighthouse” in Arabic — helps schools and communities host interfaith dialogues, invite leaders of the local community to speak, and hold cultural events featuring food, poetry and education about Muslims. The goal is to get people talking about how to increase tolerance and peace, and learn how they can be catalysts of change, said Zakzok.

One of President Donald Trump’s first actions in office was to sign an executive order suspending the U.S. refugee admissions program to study and strengthen vetting procedures. It also temporarily banned visa-holders from seven predominantly Muslim countries — Iran, Iraq, Libya, Somalia, Sudan, Syria and Yemen — from entering the U.S. A day after its signing, a federal court halted the order, and the Trump administration plans to rewrite it. 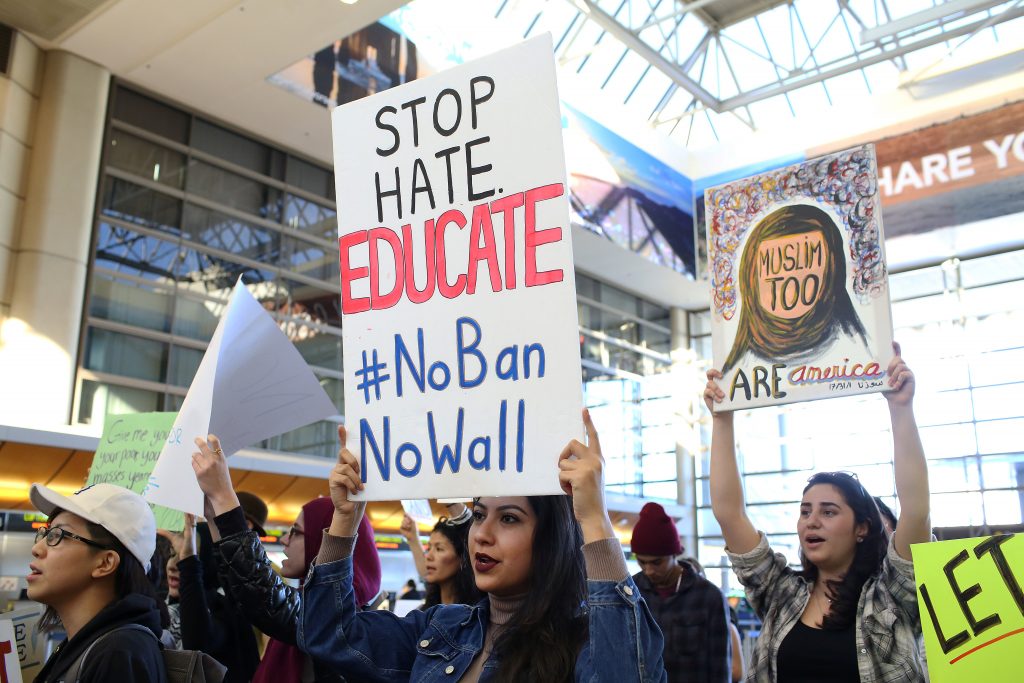 The original order, issued at the end of January, sparked spontaneous protests at airports across the country with people holding signs in support of arriving immigrants and refugees. In Waco, people laid flowers at the door of the local mosque with notes saying, “We love you. You belong here.”

“It was amazing for us to see something like this in Waco, because we just never thought Waco would be that kind of place, especially with our minuscule Muslim community,” said Zakzok.

In a community already demonstrating acceptance, how does she plan to reach other people who might not be inclined to attend a Muslim-oriented campus event? One way is to invite other student organizations, including the Baylor Young Democrats of Texas and the Baylor Young Conservatives of Texas, two popular groups on campus, she said.

Jathan Young, chairman of the Baylor Young Conservatives of Texas, agreed that Baylor strives to create an atmosphere of acceptance. “It may be a Baptist university and we definitely are unashamedly Christian. At the same time, everyone is welcome here,” he said.

Because of Baylor’s diversity and inclusiveness, Young said he does not think Project Nur needs to have a chapter on campus. “I have numerous friends from other religions, including Muslims. They never told me that they felt unwelcome.”

Young said President Trump’s executive order halting refugees did nothing to harm people’s views of Muslims at Baylor, even though he sees it being mischaracterized as a Muslim ban. “I believe 70 percent of Muslims around the world are not even affected,” he said.

“It should be viewed as more of a ban of those individuals from those countries and not from a religion. Unfortunately, because these countries are largely Muslim, that’s the way it’s being portrayed,” Young said.

Sahar Aziz, a law professor at Texas A&M University School of Law in Fort Worth, said many people who have taken to the streets and rallied around online campaigns on social media, such as #YourMuslimNeighbor and #WeAreAllAmerica, view the order as targeting Muslims.

“This is the first time in the last 17 years on which I’ve been working on post-9/11 discrimination issues that I saw a critical mass of Americans wake up and realize that we had a deeply rooted problem of prejudice against a particular religious minority.” — Sahar Aziz, law professor

However, it could be a blessing in disguise, she said. “This is the first time in the last 17 years on which I’ve been working on post-9/11 discrimination issues that I saw a critical mass of Americans wake up and realize that we had a deeply rooted problem of prejudice against a particular religious minority.”

The order has mobilized people “to make sure they don’t lose that part of America that was hard-fought” — that defends fellow Americans against religious bigotry, she said.

The relationships between Muslim and non-Muslim communities have matured since the 9/11 terrorist attacks, but more can be done, said Aziz.

More Muslims can be elected to public office and featured in the news media, she said. Instead of only reaching out to Muslims when the subject is national security, why not invite Muslims to discuss the economy, health care, education — the bread-and-butter issues that would interest any American, she said.

The Muslim community isn’t a monolith; it’s composed of different races and ethnicities, with various levels of religiosity, political beliefs and philosophies, she added.

Organizations such as Project Nur can be effective but are limited by reach in terms of people to lead it, said Aziz. Still, educating youth about tolerance and acceptance is a “worthwhile strategy for eliminating bigotry because these are the future leaders.”

Back at Baylor, Zakzok submitted the paperwork to establish a chapter of Project Nur on campus in August and is waiting to hear back. “We’ve had several meetings with different deans’ offices about the organization so far this semester, which is a good sign,” she said.

If the process continues past graduation — Zakzok is a senior — she will hand over the reins to two of her friends, Sakina Haji and Hannah Byrd. Byrd, an international studies student, who also happens to be Christian, said Project Nur could capitalize on one of Baylor’s greatest strengths: “a diverse student body.”

“Project Nur amplifies this strength by working for an atmosphere of togetherness,” she said.