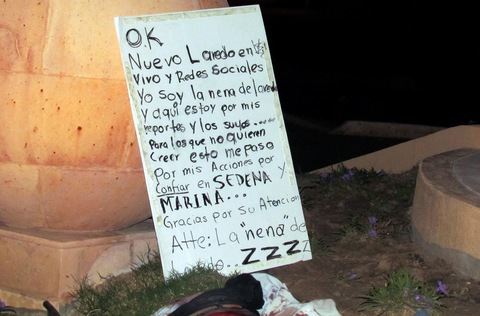 A note left beside the body of the “Girl from Laredo” is signed “Z”, which usually means the Zetas criminal cartel. Photo by STR/AFP/Getty Images.

The mutilated bodies of two bloggers were hung from a passenger overpass in the Mexican border town of Nuevo Laredo last month, with a sign attached saying, “This will happen to all Internet busy bodies.”

Also in September, police found the severed head of a woman known as “NenaDLaredo” or “Girl from Laredo” next to her computer, with a message linking her death to her narco-blogging.

Both incidents show that drug cartels — long known for trying to intimidate the mainstream media — are turning their sights on social media users as the next target of their threats.

Journalist deaths in Mexico over the past five years are a marked increase from a decade ago, as the interactive above shows. This year, three journalists were killed in Mexico for reasons directly related to their work, and four others were killed, though the motive wasn’t clear, according to the Committee to Protect Journalists.

“In the evolution of the drug-related crime in Mexico, which has been escalating for the last seven years quite considerably, we’ve seen different new technologies being involved in this conflict and different new tactics of intimidation and violence,” said Ioan Grillo, GlobalPost correspondent in Mexico City, and author of “El Narco”, which comes out Oct. 25.

In late 2005, Internet videos began popping up of drug gang members torturing and killing people. A blog called El Blog del Narco became a place where drug cartels could post these “splatter” videos along with other propaganda videos, said Grillo. “It’s gotten an enormous amount of hits” and fueled debate in the public about the nature of the drug conflict, he said.

The threats and attacks on journalists have made many mainstream reporters too scared to cover the drug violence, or their newspapers have been ordered not to cover it by the cartels, said Grillo. As a result, in places such as Nuevo Laredo and Tamaulipas, regular citizens have started using websites and Twitter to describe shootouts or the discovery of bodies and other violent incidents.

“They use anonymous names and feel there’s no comeback,” Grillo said. But after the three cases where drug operatives have murdered people for writing on websites, people all across Mexico are scared, he said.

The cartels do want some televised attention — they’ve been known to time spectacular acts of violence, such as a car bombing, for prime-time breaking news coverage, or have tipped off news outlets about a dumped body, Grillo noted. But they don’t want the media to publish information that can compromise their operations and business.

“So when they threaten a journalist, often it’s because the journalist has unraveled something like names and addresses, or a new mode of operation, or insulted them personally,” he said.

From talking to Mexicans who use social networks and using them himself, Grillo said he can tell that people feel very concerned and intimidated. “If you know a blogger has been killed, you’re thinking about that when you write and when you tweet. It obviously has a chilling effect. You think, ‘Should I say Zetas or narcos more generally? Do I really want to draw attention to this?'”

People are not only worried about harm that might befall themselves but their families, too. “It’s a very frightening and difficult environment,” he said.