More people are entering Canada illegally, but no one knows for sure why

Canada, known for setting out the welcome mat for refugees, has attracted hundreds of asylum-seekers over the past few months. These immigrants, mainly from Africa and the Middle East, are entering illegally from the U.S., though the exact reason is unknown.

In January and February, the Royal Canadian Mounted Police caught 1,134 people entering Canada illegally, or away from designated checkpoints, amounting to almost half of the number for all of last year, the Associated Press reported. In 2016, the total number was 2,464.

Most of the people entering Canada were in the U.S. legally, judging from their documents, Canadian Public Safety Minister Ralph Goodale told reporters, according to Reuters. It’s not clear if the election of President Donald Trump and his policies on immigrants and refugees were motivating factors for them to leave. Some of the immigrants had been planning their move since early 2016, which made it appear unrelated to the election, Goodale said. 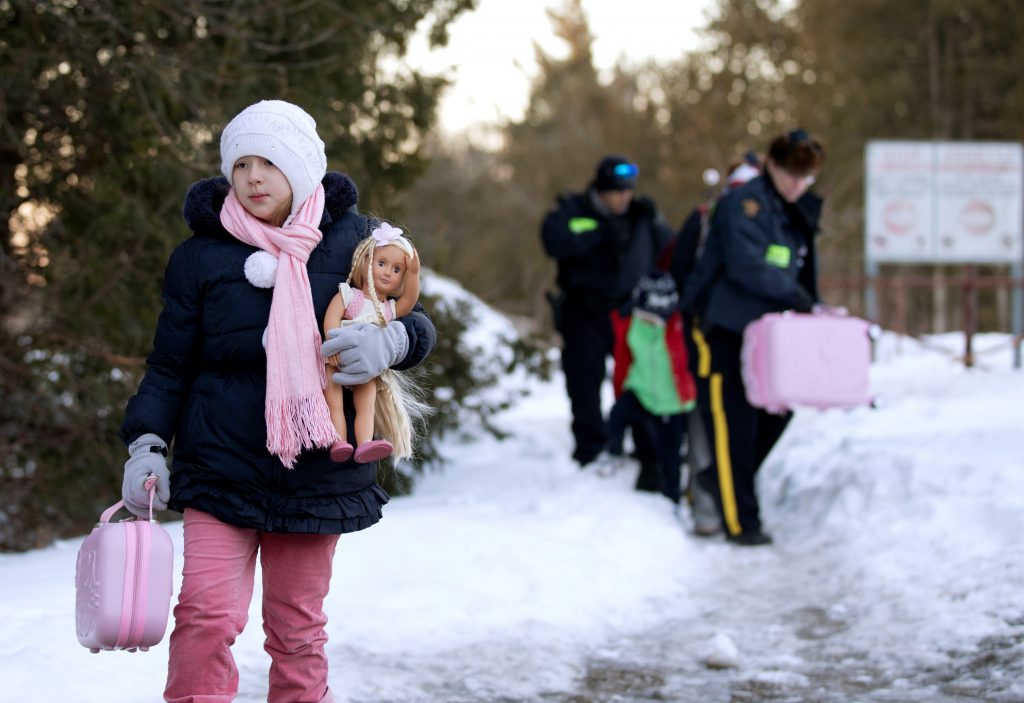 A steady stream of asylum-seekers have entered Canada illegally over the past few months. Photo by Christinne Muschi/Reuters

But others did express hopes for a better life in Canada. “We didn’t see any future there (in the U.S.), so that’s why we came over,” Pakistani refugee Mohammed Ahmed told NPR.

After President Trump signed his initial executive order suspending the refugee program, Canadian Prime Minister Justin Trudeau tweeted that “Canadians will welcome you, regardless of your faith.” 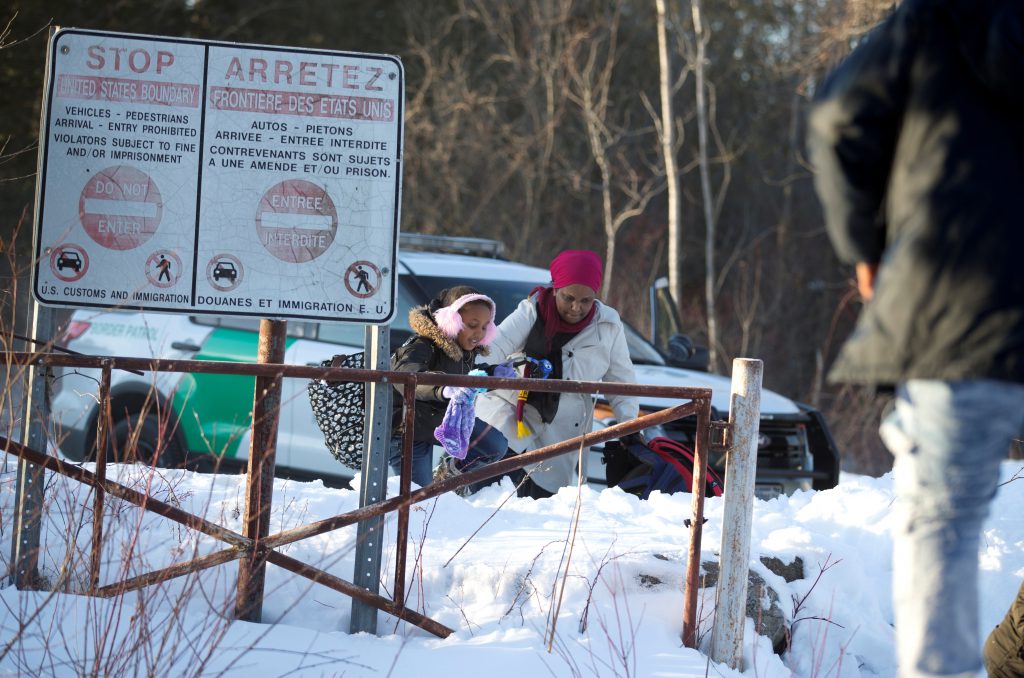 A man, who claimed the family was from Sudan, watches as his wife and daughter make their way illegally across the U.S.-Canada border. Photo by Christinne Muschi/Reuters

Despite the warm reception from the prime minister, a Reuters/Ipsos poll released March 20 showed that 48 percent of Canadians thought those who crossed over illegally should be deported, while 36 percent said they should be allowed to stay. Concerns over safety were the predominant reason.

Canada, which has a population of 35 million, has set a target of admitting 300,000 immigrants in 2017, including 25,000 refugees. By comparison, the Trump administration has indicated in executive orders that it intends to bring 50,000 refugees into the U.S., a drop from 85,000 during the previous year. And in 2015, about 1.38 million foreign-born people moved to the U.S., according to the Migration Policy Institute. 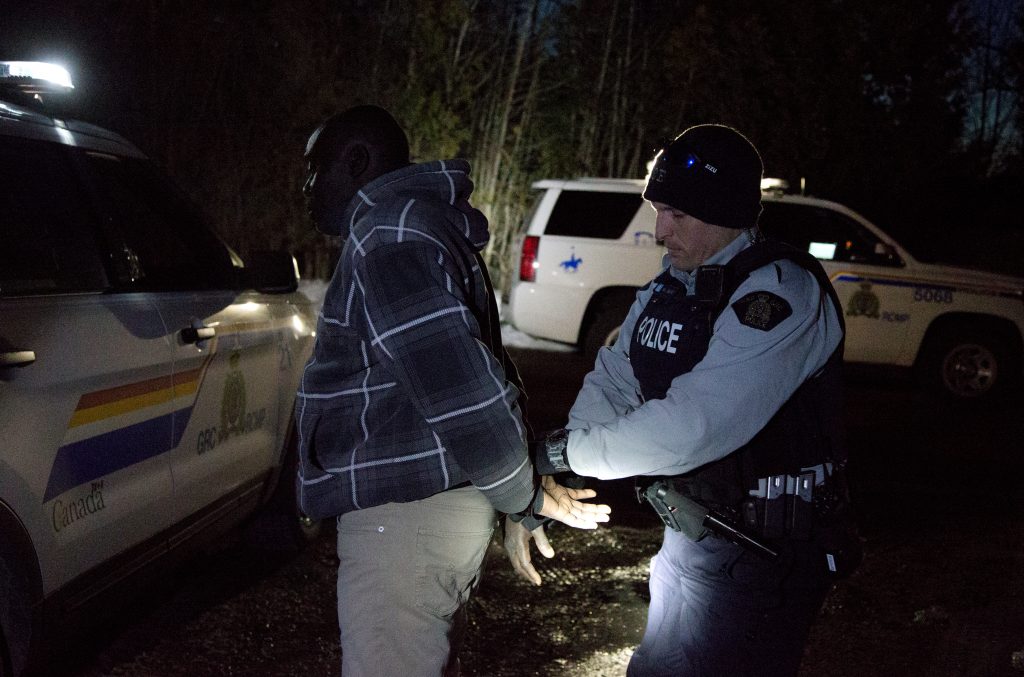 A man who claimed to be from Sudan and kept saying “I just want to be safe” is handcuffed by a Royal Canadian Mounted Police officer after he illegally crossed the U.S.-Canada border on March 20. Photo by Christinne Muschi/Reuters

Back in Canada, when people enter illegally, they are detained and questioned by the Royal Canadian Mounted Police. Once they are deemed to not pose a national security risk, they are sent to the Canada Border Services Agency to be screened with other asylum-seekers.

After they are cleared to stay, Canada offers financial, language and logistical assistance. In addition, individuals can privately sponsor refugees for a year after their arrival in Canada.

There’s no simple explanation for the influx of asylum-seekers. Homeland Security Secretary John Kelly told CTV during a recent visit to Ottawa that he has discussed the recent surge in asylum-seekers crossing into Canada with his Canadian counterparts, and they were just as puzzled.

“Those that have been in the business – your ministers – longer than I have are equally as perplexed as to why people who, generally, as a group, have come to the United States legally … enter Canada between points of entry,” he said. 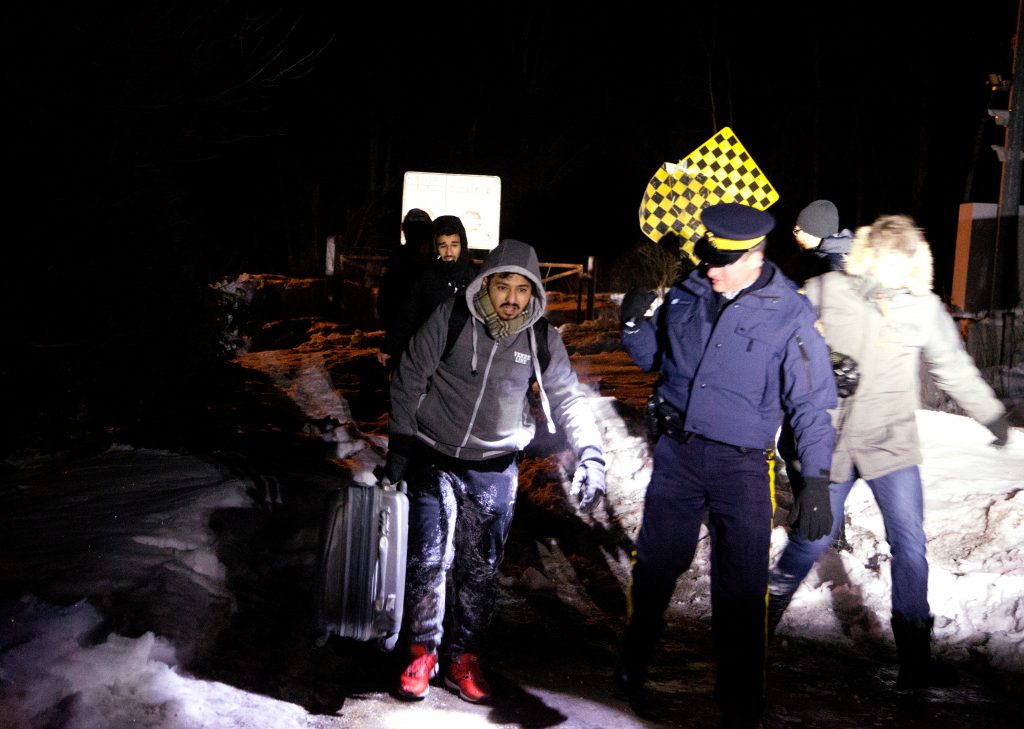 Two men who claimed to be from Yemen cross the border and enter Hemmingford, a village in Quebec, Canada, on March 20. Photo by Christinne Muschi/Reuters

Left: A family that claimed to be from Turkey is arrested after crossing illegally into Canada from the U.S. Photo by Christinne Muschi/Reuters