Will more U.S. military might in Iraq keep forces from ‘taking a licking’?

Watch the full discussion on Iraq that aired on Wednesday’s PBS NewsHour.

President Barack Obama’s plan to bulk up the U.S. military presence in Iraq by adding up to 450 more advisers and trainers has come under scrutiny, including from retired U.S. Army Col. Andrew Bacevich, who said he was skeptical it would make a difference.

Bacevich told PBS NewsHour co-anchor Judy Woodruff on Wednesday that it was “a very modest adjustment” to the president’s current policy. He said the United States has tried for 10 years to get effective Iraqi forces “and we’ve not succeeded.”

The fundamental problem? A lack of will to fight among the Iraqi forces, who are “taking a licking” from Islamic State forces, he said.

Major Iraqi cities, including Mosul in the north and Ramadi in the west, have fallen to the Islamic State militants over the past year.

The United States already has 3,100 trainers and advisers in Iraq. On Wednesday, President Obama said he would send up to 450 more trainers to help Iraqi forces.

The president said earlier in the week the United States lacks a “complete strategy” for preparing Iraqi forces to fight Islamic State militants, and that he had asked military leaders to come up with ways to better train and equip the Iraqis. 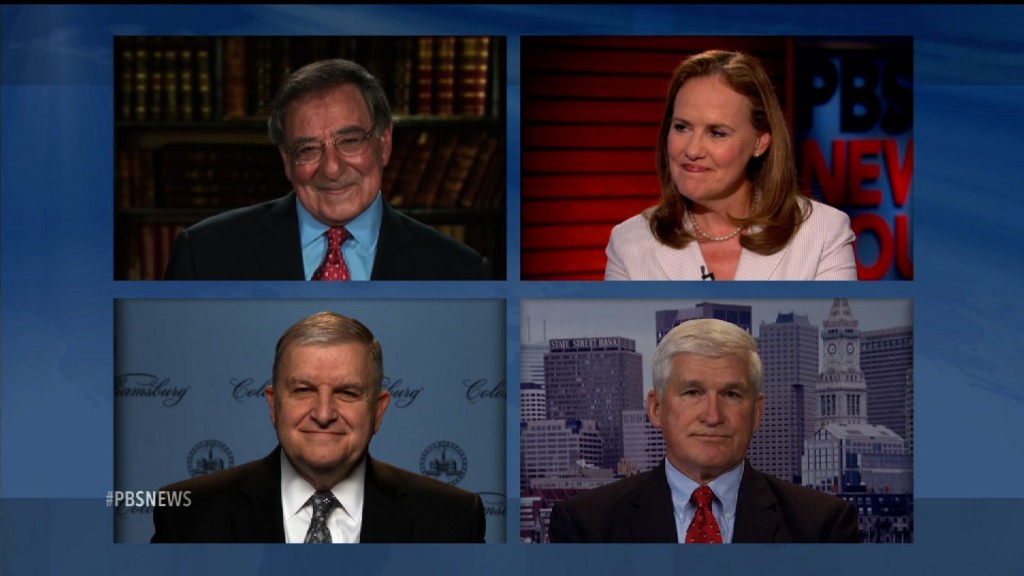 “There’s no question that I think the president has taken the right step in adding these trainers and advisers,” said Panetta. The Islamic State group, or ISIS, has a lot of momentum in Iraq and adding advisers was a good first step, he said.

“This is about a threat to our national security,” said Panetta. If the Islamic State militants have a base of operations in Iraq, they could use it to attack the United States at home, he said.

Bacevich countered that the threat from the Islamic State group is limited. “We probably should be worried more about drug lords in Mexico.”

But Flournoy also called the president’s announcement a “good” and “smart” move, which allows the United States to start training local Sunni militias in Anbar province. She recommended allowing U.S. forces to advise during Iraqi operations and calling in “more effective” airstrikes.

The Islamic State group is displacing al-Qaida as a global terrorist network and is gaining ground elsewhere, including Libya and Afghanistan, she said.

Zinni cautioned that the president’s decision overestimates the Iraqi forces’ capabilities and will to fight. “This is almost deja vu to Vietnam before we committed the ground forces, we dribble in more and more advisers and support,” he said. “I do think it’s in our national interest to have a stable Middle East,” he continued, but the United States has not shown it is fully committed to the fight.

Flournoy said the “will to fight” will come from the Sunnis, who feel they are persecuted under the Shia-dominated government in Iraq and believe they will be treated better in the end. “That’s what will create the will to fight on the part of the Sunni population.”

She and Panetta agreed the United States needs to work with other allies in the region. “We can’t just stand on the sidelines wringing our hands,” Panetta said.

Bacevich suggested including Iran as an ally, harkening back to World War II when the United States partnered with Soviet leader Joseph Stalin to defeat Nazi Germany. “Sometimes when you can’t fix the problem on your own, you need to make some compromises and find the partners who can get the job done for you.”

Prior to the president’s announcement, Woodruff spoke to Iraqi Ambassador to the U.S. Lukman Faily about what the U.S. should do in Iraq.