Finland gets gold in mom rankings; U.S. maternal deaths on the rise

Finland is the best country to be a mother, according to Save the Children’s 15th annual ranking released Monday, while Somalia comes in last. The United States hovers at 31 — about the same as last year — but is seeing an increase in maternal deaths, according to this study and others.

Known as the Mothers’ Index, Save the Children’s report ranks the well-being of mothers and children in 178 countries — 46 developed nations and 132 developing countries — based on health, nutrition, education and economic and political status. 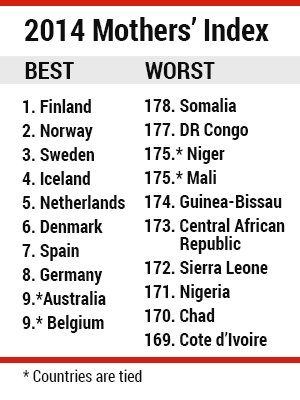 Finland, which has earned the top spot twice in the index’s 15 years, scores high in all of the indicators, though is not necessary No. 1 in all of them. Somalia, at the other end of the scale, has suffered from reoccurring violence since its central government collapsed in 1991. There, one in 27 women is likely to die from a pregnancy-related cause and one in seven children die before reaching age 5, according to the report.

In the United States, the report says one in 2,400 women is likely to die in pregnancy or from childbirth-related complications, putting it on par with Iran.

It marks a troubling trend, according to the report: The maternal death rate in the United States has increased more than 50 percent since 2000 — from one in 3,700 to one in 2,400. “Only 14 countries in the world made less progress than the United States on this indicator during the same time period,” the report says.

A different study published Friday in the weekly medical journal The Lancet showed similar results but over a longer period of time. Researchers for the Institute for Health Metrics and Evaluation at the University of Washington estimated that 7.2 mothers died from pregnancy-related causes in the United States per 100,000 births in 1987, compared to 18.5 deaths per 100,000 births in 2013.

The reason? “There’s no simple answer,” but rather a complex interplay of issues, said Dr. Siobhan Dolan, a professor of obstetrics, gynecology and women’s health at the Albert Einstein College of Medicine in New York and a medical adviser to the March of Dimes.

Increasing age of the mother is one factor. As women give birth at advancing ages, they are more likely to have chronic medical conditions such as diabetes, hypertension and heart disease, which can cause complications in pregnancy, said Dolan. Also adding to the risk are increasing rates of obesity and caesarean sections, which bring surgical risks such infection and bleeding, she said.

To help with the problem, women should seek health care to manage pre-existing medical conditions before becoming pregnant, take vitamins with folic acid during pregnancy, and continue medical care post-pregnancy.

“We want to have a system in place, and we do in many cities, where if you are someone who has these more chronic medical conditions that need more high-risk care, then you get referred to high-risk pregnancy care,” Dolan said.

She also offered a caveat when viewing these types of reports: U.S. records of maternal deaths include anything pregnancy-related, including postpartum depression, which are factors other countries might not take into account.

“That is just a limitation of these cross-country comparisons. It’s a little bit comparing candy apples and apples — they’re just a little different, so you have to look at the data,” she said.

Save the Children’s report also looked at the toll natural disasters and civil wars take in places such as Syria and the Democratic Republic of Congo.

In the DRC — which ranked 177, even after the 1996-2002 civil war, rape continues to be used by combatants as a tool to fight the enemy. And education remains a challenge, because families can’t afford to send children to school, and those who can go face the possibility of attacks on their way to and from school.

In Syria — ranked 115, the refugee crisis has made the problem of early marriage even worse, one of the factors the study considered. “There are reports that Syrian refugee girls in Egypt, Jordan, Lebanon, Libya and Turkey are being forced into marriages — often with much older men — under the pretext of protecting their virtue and rescuing them from the harsh life of refugee camps,” the report says.

Read more statistics and recommendations, and what’s being done in some cases, in the 2014 report.

Left: A mother and daughter in Iraq, which ranked 104 in the Mothers' Index. File photo by Larisa Epatko