NAJAF, Iraq | The Imam Ali Mosque is considered the one of the holiest sites in Shia Islam. It was built in 977 over the tomb of Ali, the cousin of the Prophet Muhammad.

The NewsHour recently visited the shrine during Ramadan and watched as crowds grew throughout the evening.

People gathered to pray, eat picnics in the rug-covered outdoor patios and meet with their families and friends. 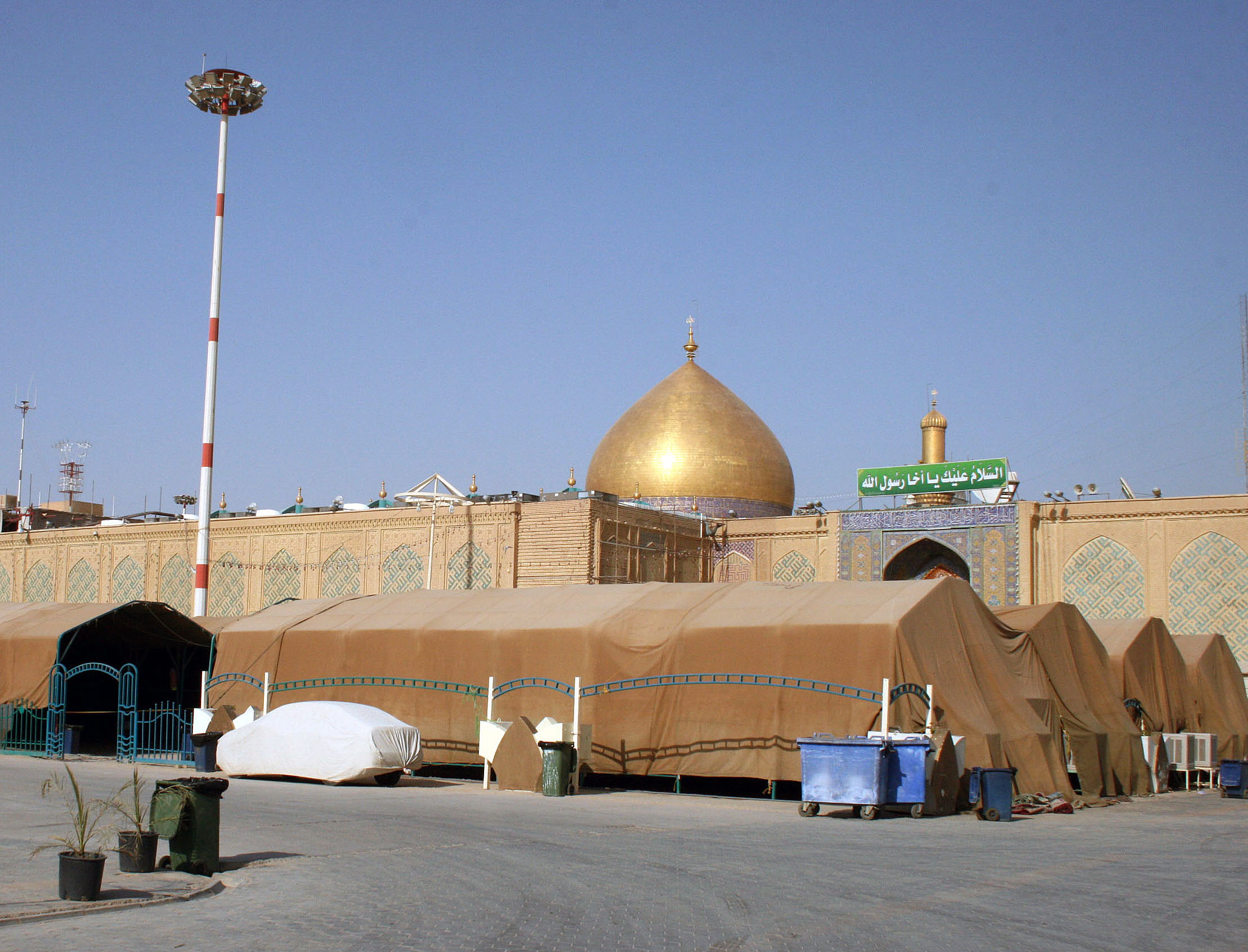 Pilgrims arrive by the busload to pray at the gold-domed shrine. Najaf Gov. Adnan Al-Zurufi told us 1.5 million visitors come each year, more than double the population of the city. Photo by Larisa Epatko

Built in 977 over the tomb of Imam Ali, the mosque was reconstructed twice. After the 2003 U.S.-led invasion of Iraq, the mosque was the site of several attacks and used as a base by militia members. 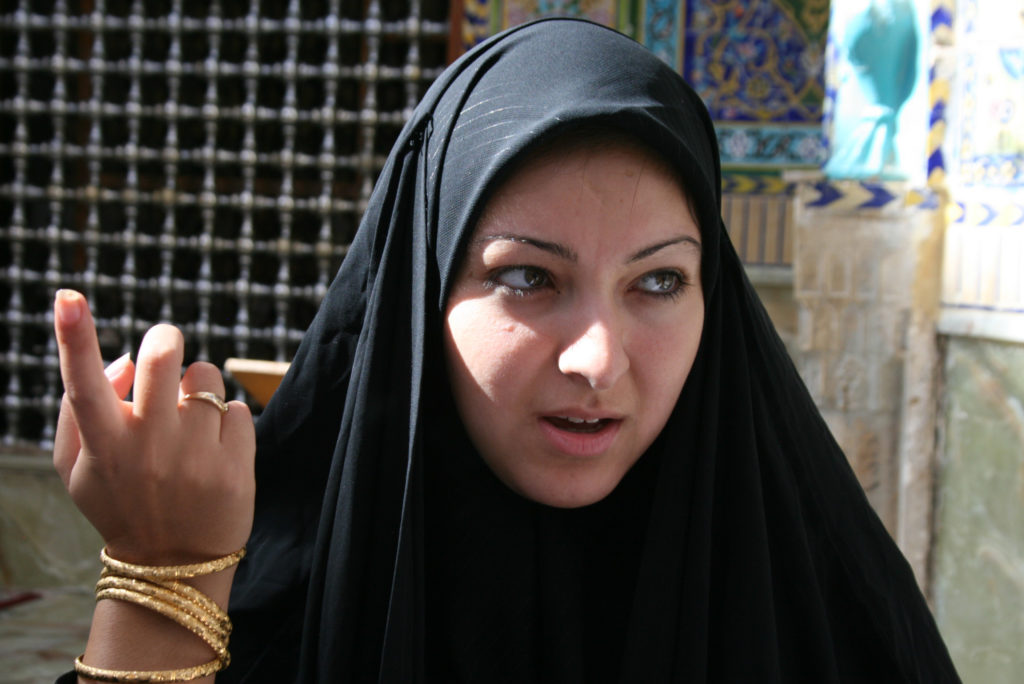 A woman explains how there are separate entrances for men and women at the mosque. Photo by Larisa Epatko 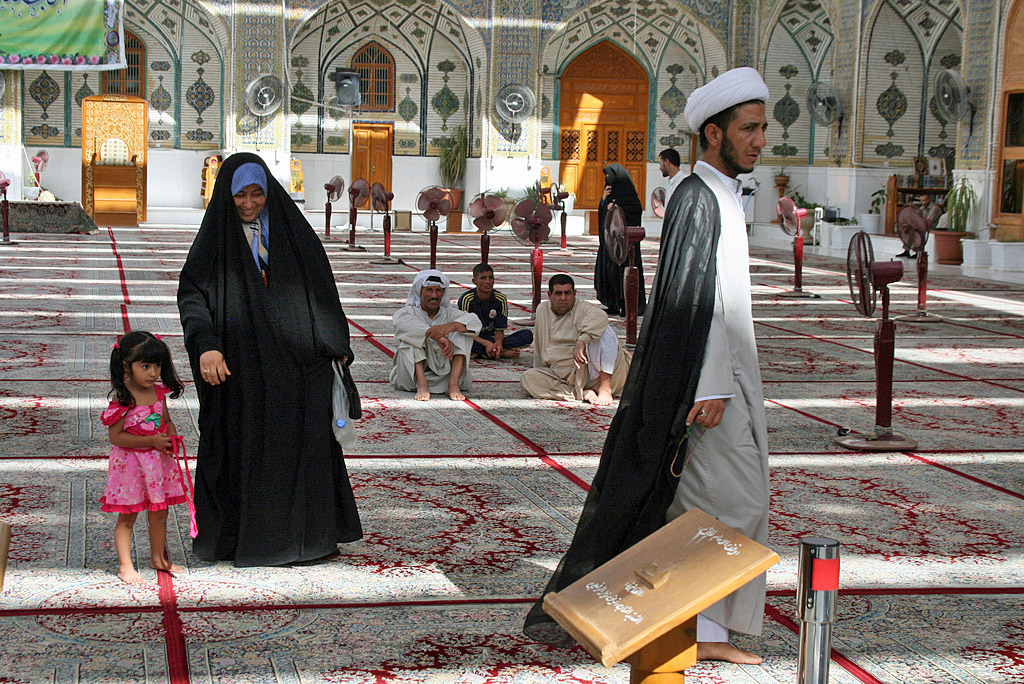 Each year, millions of pilgrims come to Najaf, Iraq, to visit the Imam Ali Mosque. Photo by Larisa Epatko

The gold-domed shrine underwent its latest renovations two years ago. The surrounding streets are lined with hotels for pilgrims, who travel from all over Iraq and beyond to pay their respects. 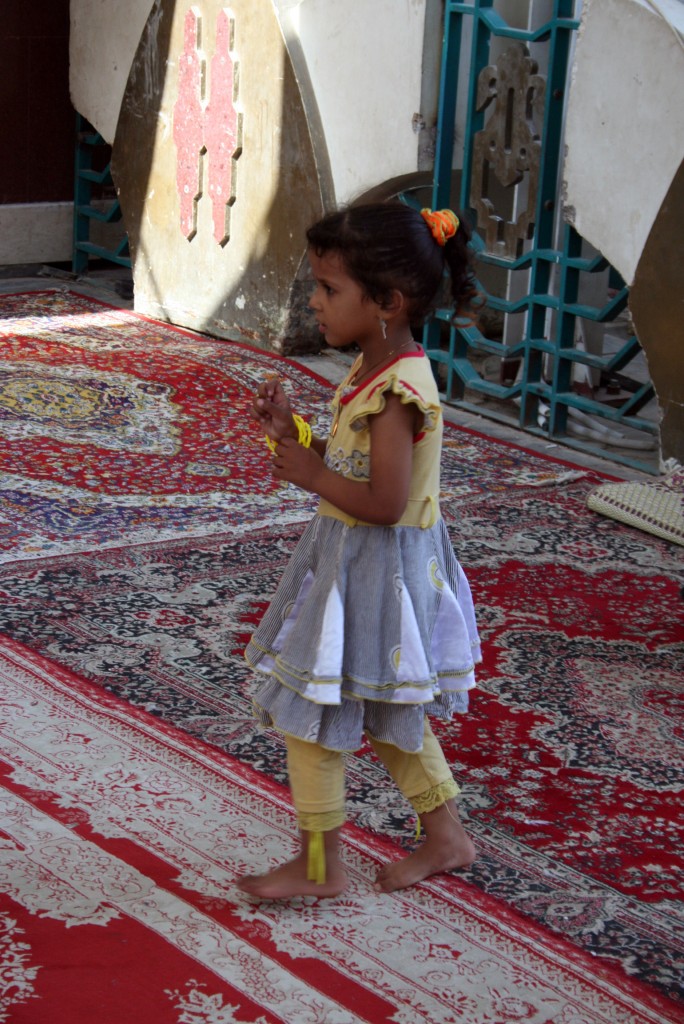 A girl waits for her mother to stow their shoes before entering the mosque. Ten percent, or more than 100 million, of the world’s Muslims are Shiite. Photo by Larisa Epatko 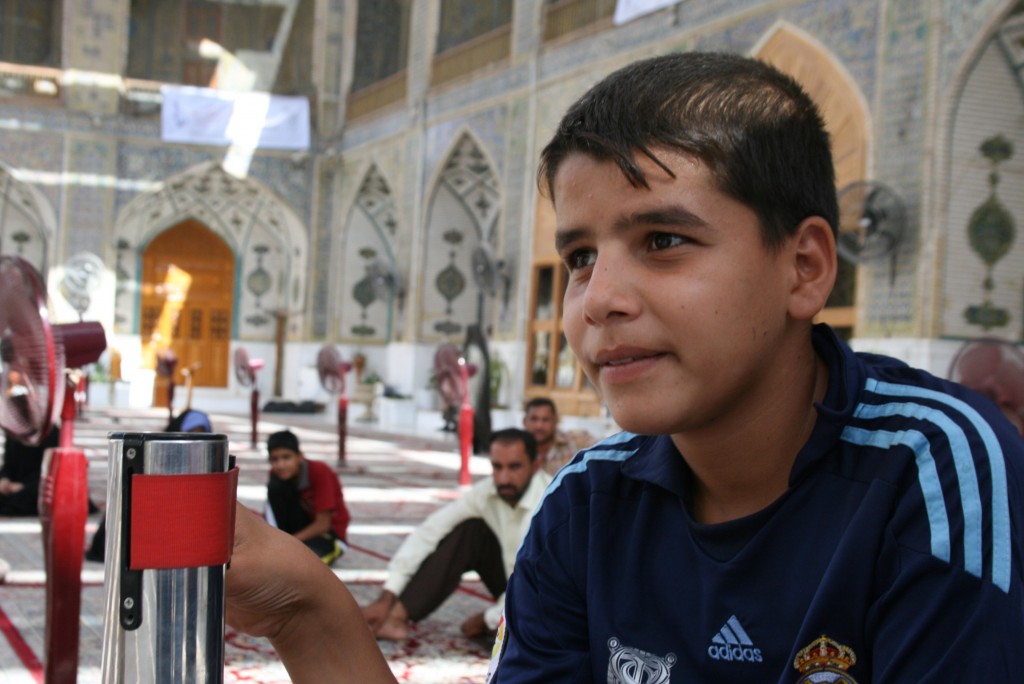 About 70 percent of Muslims in Iraq are Shiite. Many Sunnis left Iraq after the ouster of Sunni leader Saddam Hussein. Photo by Larisa Epatko 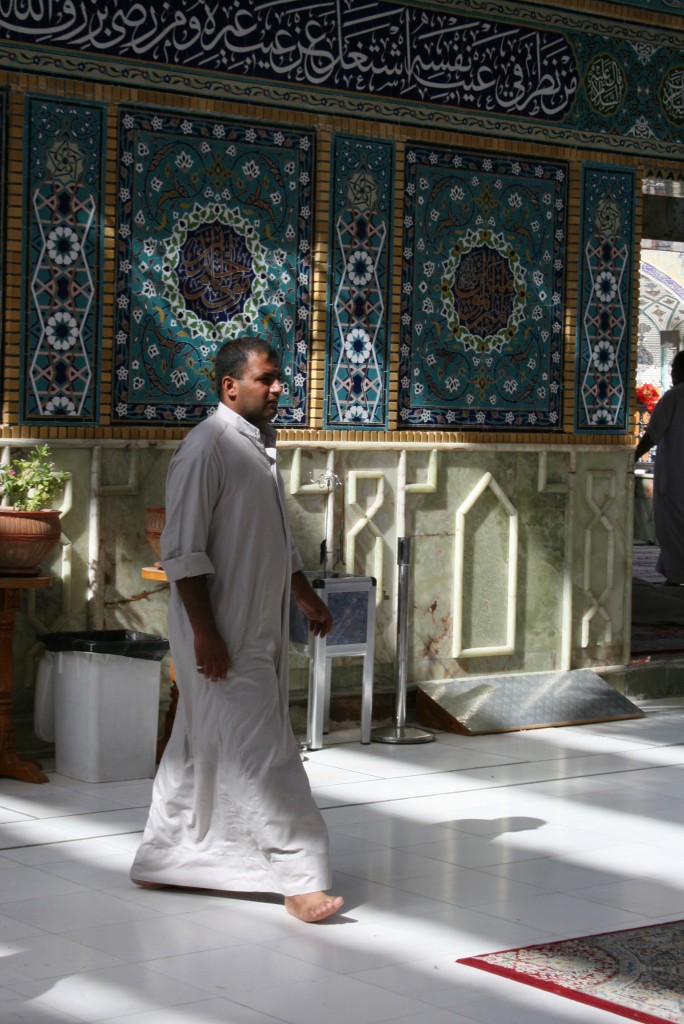 Mosaics in green, blue and gold cover the interior and exterior of the shrine. Photo by Larisa Epatko 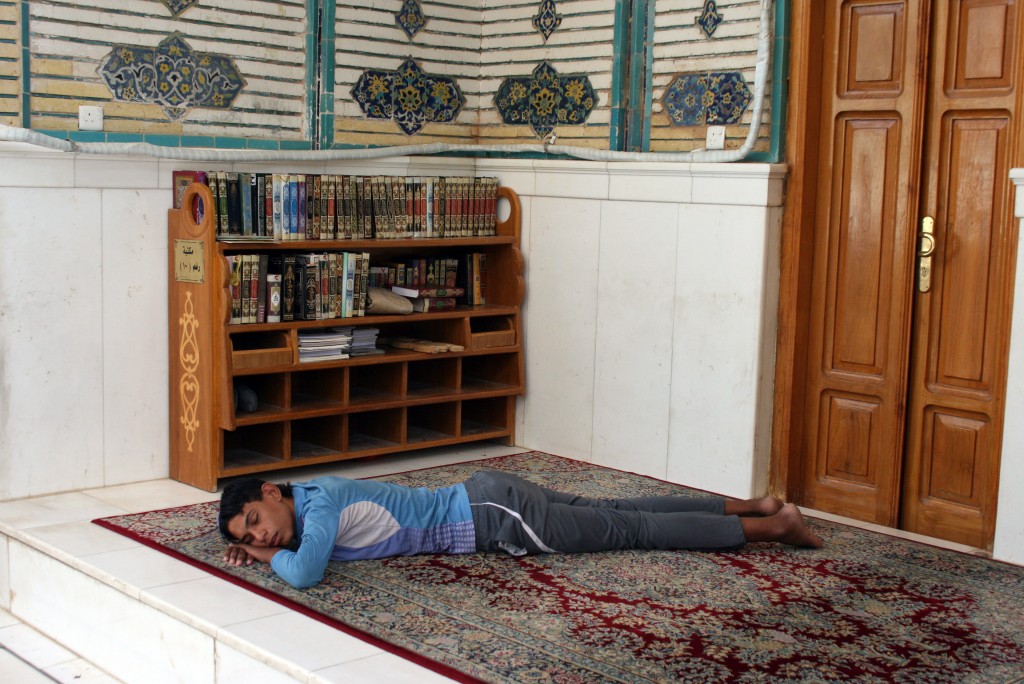 A boy slumbers in a side prayer room during the hot summer day. Photo by Larisa Epatko 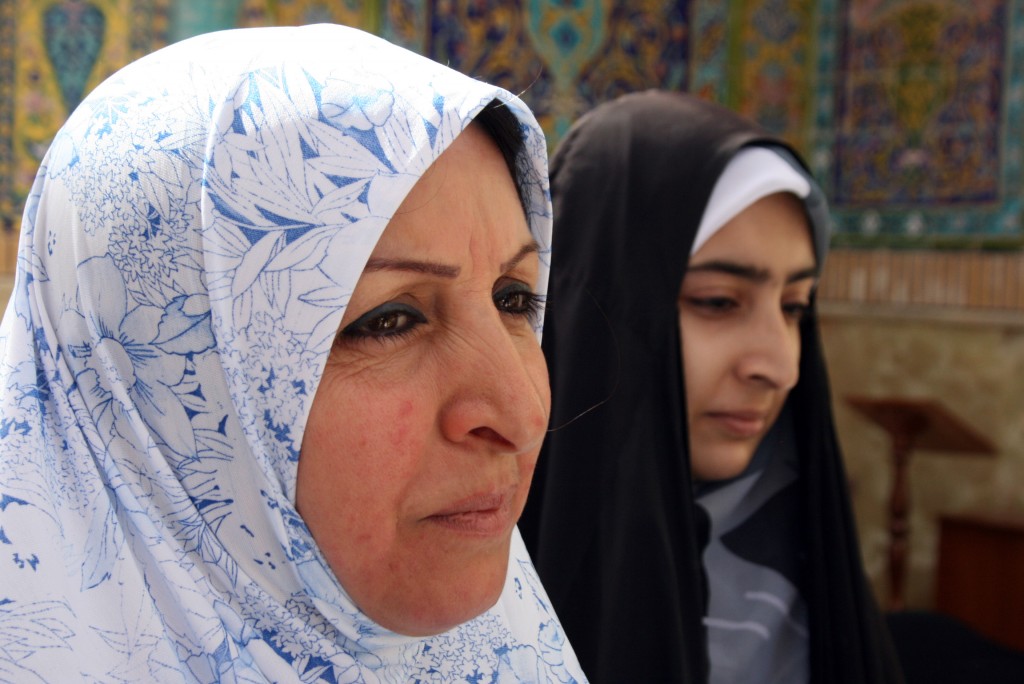 Janan Jezma and her niece Sara are two of many who make an annual pilgrimage to the shrine. “Because I am Muslim, I am Shia, I must come here,” Jezma says. They came to Najaf from Baghdad, about a four-hour drive. Photo by Larisa Epatko 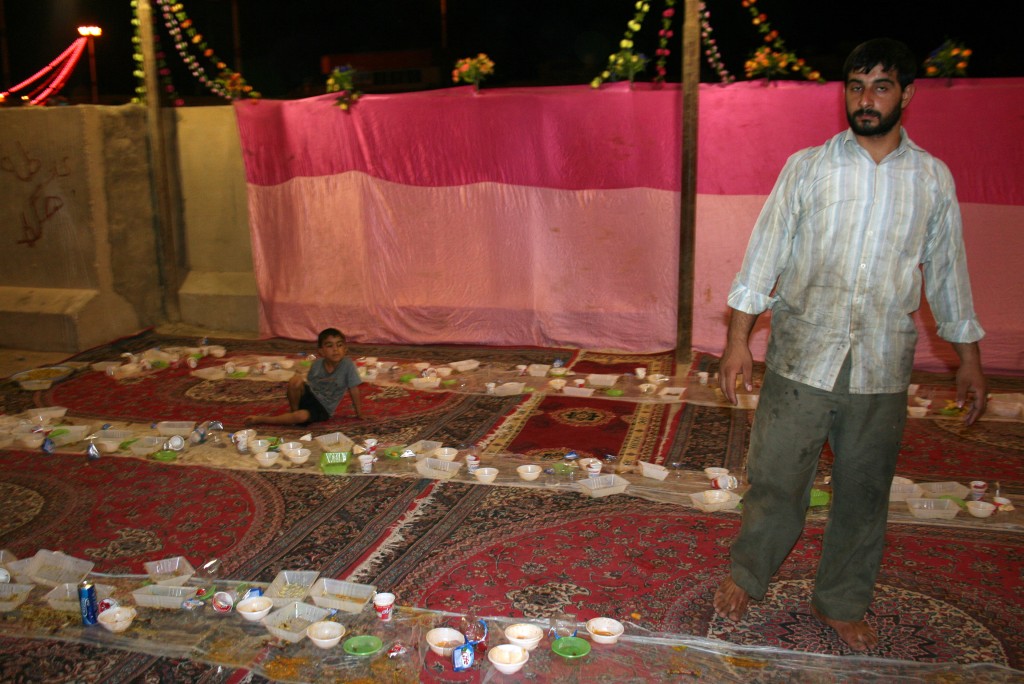 Rows of empty plates are all that are left after the breaking of the day’s fast. During the month-long Ramadan, observant Muslims do not eat or drink anything, including water, while the sun is up. Photo by Larisa Epatko

See all of the NewsHour’s 2010 reports from Iraq and more photos from the trip.

Left: At night, the Imam Ali Mosque lights up and pilgrims flood the gates for prayer and community. Photo by Larisa Epatko