Nepal not prepared for intensity of earthquake, geologist says

It’s no mystery that Nepal — precariously perched atop two shifting geologic plates — is vulnerable to earthquakes. For the past decade, Nepal has been working on preparing for the next big one. It established a Department of Disaster Management and started using sturdier building codes for new construction.

But between its political and economic troubles, the impoverished nation just couldn’t get all of its disaster preparation and response systems in place in time for Saturday’s massive quake, said one geologist who had been working with the Nepalese government on its readiness.

The death toll from Saturday’s massive earthquake is now more than 5,000, with more fatalities expected in remote villages that haven’t reported in yet. 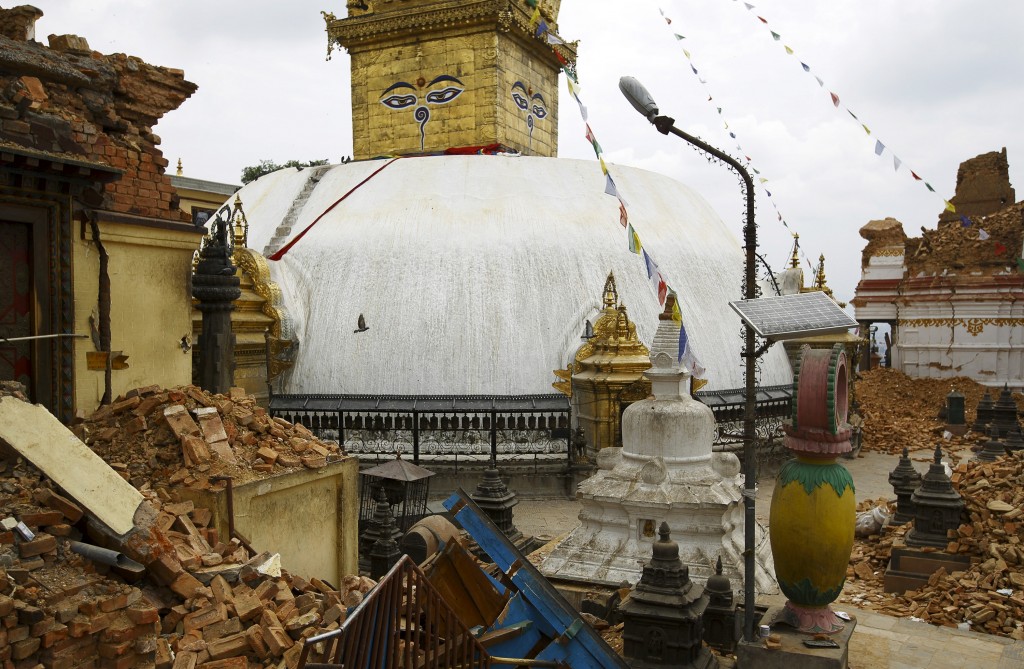 Shrines and a monastery at the Swayambhunath Stupa, a UNESCO World Heritage Site, collapsed after Saturday’s earthquake in Nepal. Photo by Navesh Chitrakar/Reuters

The Nepalese “were not prepared for such a strong earthquake. They just simply had not had time to get all of the things they’d done operationalized,” said geologist Allen Clark, a senior fellow at the East-West Center in Hawaii.

And such a major earthquake required a coordinated international response that could launch on-the-ground quickly, but in Nepal the logistics are very difficult, said Clark. Nepal’s one international airport and smaller airports can’t handle the influx of supplies, nor can they be distributed efficiently over damaged and landslide-blocked roads.

“It’s going to be a very difficult situation to get people and supplies and capacity into the outer areas around Kathmandu,” he said. “That’s going to take unfortunately probably several weeks, not a couple days.”

Saturday’s 7.8-magnitude earthquake that hit midway between the capital Kathmandu and the city of Pokhara was the worst to rattle Nepal since 1934, when an 8.2-magnitude quake killed more than 17,000 people.

Kathmandu is built on a large ancient lake along the front of the Himalayas, so it is primarily on sediment — not rock, said Clark. The sediment allowed the transmission of ground waves which added to the destruction. 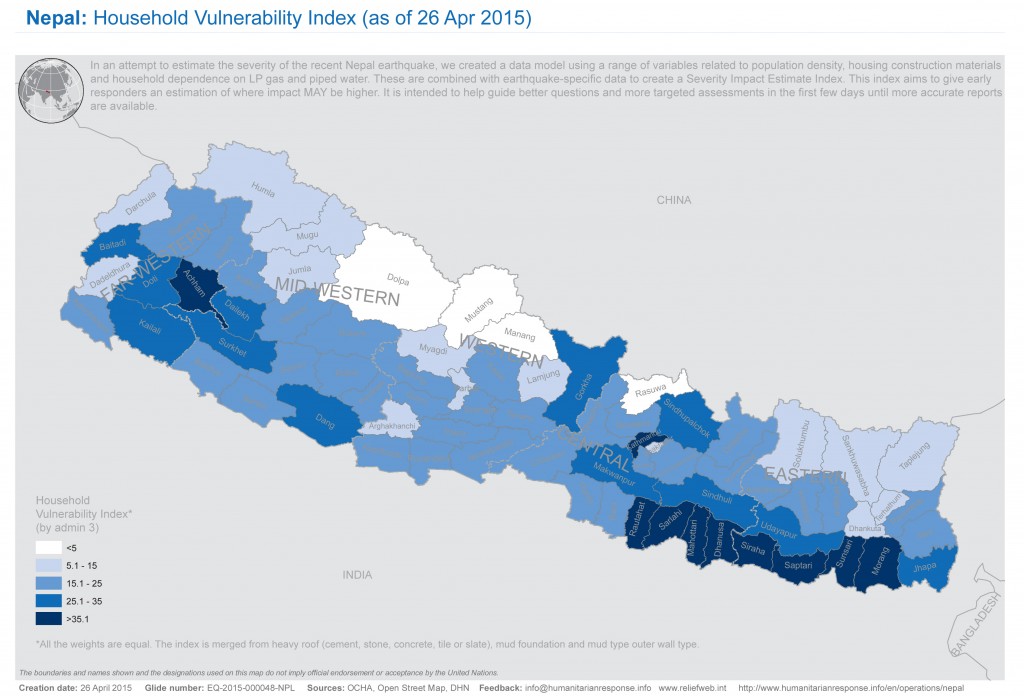 A map shows the vulnerability of households in Nepal following the April 25, 2015, earthquake. The data model uses a range of variables related to population density, housing construction materials and household dependence on gas and piped water. These are combined with earthquake-specific data to create a Severity Impact Estimate Index. Map by the U.N. Office for the Coordination of Humanitarian Affairs

For the last 10 years, Nepal had been working with the United Nations and other international groups on disaster management and preparedness. The government put an overall disaster plan in place, including reinforcing and constructing stronger buildings, and training people to monitor the construction. Clark helped set up the disaster management system and evaluated areas at risk.

“They did as well as they could under the circumstances. We have almost a decade of constant turmoil in the country, during which the disaster management system was set up and put in place,” said Clark.

It’s too early to tell if the management system worked, he said, but preliminary reports show the more modern portions of Kathmandu, including new industry- and tourist-related buildings, did not receive as much damage as the older parts, indicating Nepal’s efforts to make buildings safer seemed to be working.

“The activities that had been going on by the U.N. and other organizations were successful, they simply didn’t have enough time to revamp the system adequately,” said Clark.

The older areas that didn’t fare as well included many UNESCO World Heritage Sites built in the 1700s and 1800s that were damaged or completely destroyed. 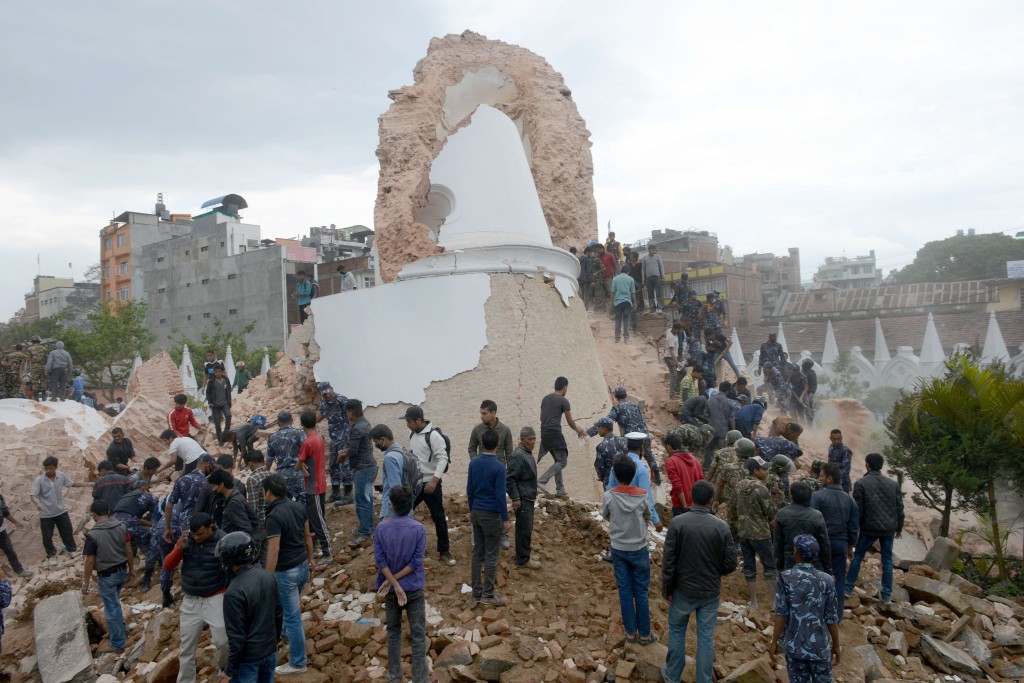 Nepalese rescuers and onlookers gather at the collapsed Dharahara Tower in Kathmandu on April 25, following a 7.8-magnitude earthquake. Photo by Prakash Mathema/AFP/Getty Images

For example, the landmark Dharahara Tower, built in 1832 for Queen Lalit Tripura Sundari, collapsed in Saturday’s quake with a reported 180 bodies inside.

“It’s going to be a very significant blow to the historical legacy of the city,” Clark said.

Rebuilding will cost an estimated $10 billion, about half of Nepal’s $20 billion economy, according to Nepal’s finance chief.

But, despite the probability of more earthquakes to come, there’s no question the city will rebuild, since it’s the capital and there aren’t other options for available flat, stable space, said Clark.

“It’s going to be rebuilt and hopefully it will be rebuilt to even better standards this time,” he said. “You might think of it like Los Angeles, where there has been and going to be another major earthquake someday and yet we build right back on it all the time.”

Left: A man passes a damaged statue of Lord Buddha in Bhaktapur, Nepal, a day after an earthquake struck central Nepal on April 25. Photo by Navesh Chitrakar/Reuters