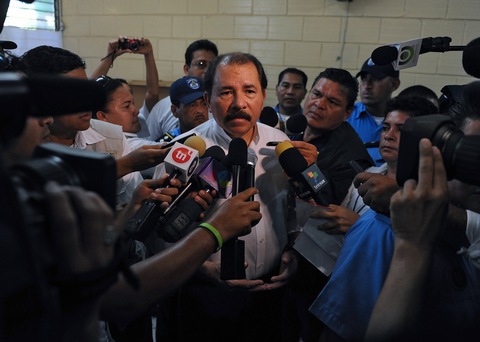 Nicaraguan President Daniel Ortega looks poised to win a landslide victory to a third term in office after orchestrating changes to the constitution to allow him the chance to stay in power.

Early results give the former revolutionary a wide lead over the top opposition candidate in Sunday’s polls. Ortega had 63 percent of the votes — well above the 40 percent he would need to avoid a runoff — with 40 percent of the votes counted, reported Reuters. The Associated Press and the New York Times reported a similar lead in earlier results.

Ortega had not made any statement of victory by mid-day Monday, but his allies Cuban President Raul Castro and Venezuelan President Hugo Chavez both extended their congratulations, reported the AP.

Ortega’s campaign enjoyed popular support, particularly for his vast social aid programs, but drew criticism from political opponents and democracy advocates when he engineered a change to the constitution to overrule a ban on third presidential terms.

“The president has forgotten his own fight to bring down a dictatorship,” opposition candidate Fabio Gadea told Ray Suarez during a reporting trip before the election. “He’s forgotten that when dictators close all the roads to democracy, the people can rise up.”

International election monitors pointed out numerous problems with the elections, including difficulty of their observers accessing some polling sites. A European Union observation team plans to issue a report Tuesday, based on reports that some voters were blocked from voting or from receiving their credentials.

But despite the electoral problems, it would have been a major surprise if Ortega weren’t leading because he was so far ahead in the polls leading up to Sunday’s election, said John Otis, who reported from Managua on the elections for GlobalPost. The political opposition in Nicaragua is fractured and struggled to gain momentum behind any one candidate during the campaign.

Ortega grew a strong base of support among the poor with the roll out of social welfare programs, providing subsidized food, clothing, health services and education programs. For many in Nicaragua — the second poorest country in the Western Hemisphere — the programs are crucial to their survival.

Ortega’s close ties to Venezuela’s Chavez also brought a steady stream of revenue and subsidized oil into the country. Commodity prices for Nicaragua’s main exports of coffee, beef and gold increased during his latest term, helping the Nicaraguan economy grow faster than its Central American neighbors.

But despite these economic developments, it was Ortega’s willingness to change the constitution that has some political analysts calling his leadership into question, as Ray Suarez reported in his notebook from Nicaragua.

“This is a turning point,” Suarez wrote. “No matter what you think of Ortega’s latest tenure and his service to the people of his country, his unwillingness to follow the constitution and cede power will garner him attention from good government watchdogs around the world.”

Just as important as the presidential results are those from Sunday’s legislative elections, which are still forthcoming, said Otis. If Ortega’s Sandinista Front wins a majority of seats in the 92-seat unicameral legislature, they could easily approve changes to the constitution, including possibly overturning the ban on reelecting sitting presidents in time for the next election in 2016, he said.

Watch Ray Suarez’s report from Nicaragua leading up to the election:

Stay tuned for another Suarez report from Nicaragua focusing on efforts to bring a life-saving vaccine to the country’s children. View all of our World coverage and follow us on Twitter.