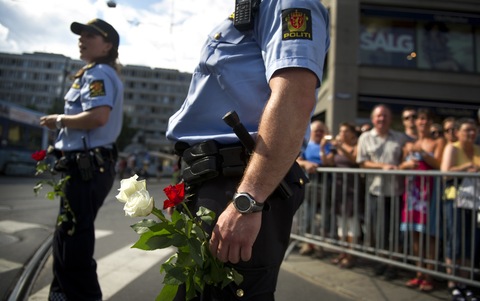 Police hold flowers that people gave to them at a memorial in Oslo, Norway. Photo by Odd Andersen/AFP/Getty Images

Norway formed a nine-person commission Friday to investigate last month’s deadly attacks in Oslo and on a youth camp, and the subsequent police response, which some have criticized as too slow.

Far-right extremist Anders Behring Breivik confessed to planting a bomb outside a government building that killed eight people and to the shooting deaths of 69 young people participating in a camp on the island of Utoya on July 22.

About an hour passed between the police getting word of the killings to when Breivik was arrested. The police told Reuters that they overloaded a boat to reach the island, causing it to stall and requiring them to use other recreational vessels.

“The commission is to propose measures to improve preparedness in the future,” said Prime Minister Jens Stoltenberg. “The objective is to ensure that Norwegian society is prepared in the best possible way to prevent and if necessary respond to any future attacks.”

Read more of his remarks about the commission.

The commission, which is independent of the government, has members representing intelligence, emergency and other services. A tenth member will come from a neighboring country with law enforcement or rescue expertise. The panel is tasked to give its recommendations to the government by Aug. 10, 2012.

Meanwhile, questioning of Breivik continued this week. He has admitted to the attacks but not to criminal guilt because he says they were needed to help preserve Norway and Europe from Islamic-tolerant governments.

Norwegian authorities said Wednesday they are growing more convinced that Breivik acted alone in plotting and committing his acts of violence, The Associated Press reported.

Investigators are still collecting information, and haven’t come to conclusions about his sanity and whether he definitely acted on his own. They say Breivik is being polite, cooperative and detailed in his descriptions.

British Sky News reported that police said Breivik had a camera and might have filmed his attack on Utoya island, so they are looking for that camera.

The Associated Press presents photos, names and ages of some of the victims who were at the camp in Utoya.

We’ll have an interview with Norwegian Foreign Minister Jonas Gahr Stoere on an upcoming NewsHour. View all of our World coverage and follow us on Twitter.