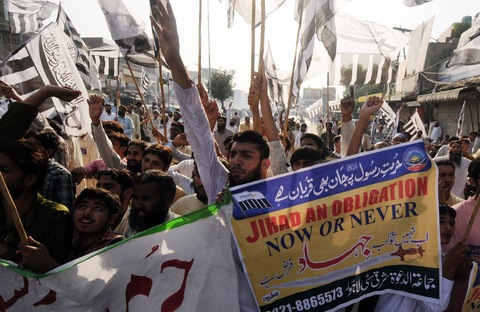 The angry backlash in Pakistan over an American-made Internet video that insulted the Prophet Muhammad had a common theme: the U.S. government was to blame.

The fallout from the film mocking Muslims continued this week when a Pakistani minister offered a $100,000 bounty for anyone who killed the moviemaker. The film and freedom of expression also came up multiple times in this week’s speeches at the U.N. General Assembly.

In his U.N. address Tuesday, President Obama called the Internet movie “crude and disgusting”. He also emphasized that there was no connection with the U.S. government.

“I have made it clear that the United States government had nothing to do with this video, and I believe its message must be rejected by all who respect our common humanity.”

But the sentiment among many in Pakistan is that the U.S. government is at least complicit, if not partly behind the film, said Suzanna Koster, GlobalPost’s reporter based in Pakistan’s capital Islamabad.

Koster said some of the Pakistanis she interviewed for her coverage of the protests thought that if the United States is such a superpower than it could have stopped the movie, but since it didn’t then it must be in on it. She said even a Pakistani official she spoke to said he didn’t think the film was the work of one man.

The U.S. government tried to counter those claims by putting ads on Pakistani television and in newspapers showing Secretary of State Hillary Clinton and President Obama condemning the content of the film, though it didn’t seem to have much of an impact on those in the streets, Koster reported.

“In Pakistan, the feeling that the U.S. is out to target Muslims is an idea that’s very much alive,” she told us, and in this case since the movie was made in America, it backed up those beliefs.

Actions perceived as attacks on the Prophet Muhammad, including cartoons published of him, are taken ultra-seriously. According to one demonstrator Koster quoted:

“Our prophet is more dear to us than our parents,” said Qaiser Shah, a 27-year-old protester, wearing a prayer cap.

The prophet brought the words of Allah to Muslims, and those words guide their lives in this world and tell them how they can live in the next world, said Koster. So anyone who attacks the prophet is attacking their way of life and their route — their “guiding light” — to heaven.

“The next life is very important and plays a large role in Pakistan,” Koster said, and many of those she interviewed expressed the belief that the prophet has this vital place in their lives.

The demonstrations in Pakistan were a mixture of peaceful and violent, with some protesters ransacking shops, movie theaters and churches.

Those who opted for expressing themselves peacefully, or who chose to stay at home, were dismayed by the others using violence and by their leaders for not stopping them, said Koster. “They felt really bad that Pakistan has again presented such a bad picture of itself. You see these mad, screaming men on the streets, but that’s not the average Pakistani.”

[Due to rights restrictions, video is no longer available.]

The NewsHour has a partnership with the international news website GlobalPost. View additional NewsHour World coverage.