As Yemen struggles to contain a cholera outbreak that has taken nearly 2,000 lives since last fall, doctors and nurses are working around the clock to treat the sick, and community volunteers are going door to door telling people what they can do to protect themselves.

How widespread is the outbreak? Yemen’s Health Ministry has reported about 408,600 suspected cases of cholera and 1,885 deaths in the current outbreak, which began in October 2016. The country has seen a surge since April of 5,000 cases reported each day.

U.N. agency leaders who recently visited the Arab country are calling it the “world’s worst cholera outbreak in the midst of the world’s largest humanitarian crisis.”

“At one hospital, we visited children who can barely gather the strength to breathe,” they said in a joint statement.

READ MORE: In Yemen conflict, preventable diseases are a deadly side effect for children

What is cholera? Cholera is an infectious disease that causes diarrhea that can lead to dehydration and death if untreated. It comes from water or food contaminated with a bacterium called Vibrio cholera, and most often is spread through contact with the feces of someone who has the disease. Mild cases can be treated with rehydration drinks, and more severe cases need immediate intravenous fluids and antibiotics. 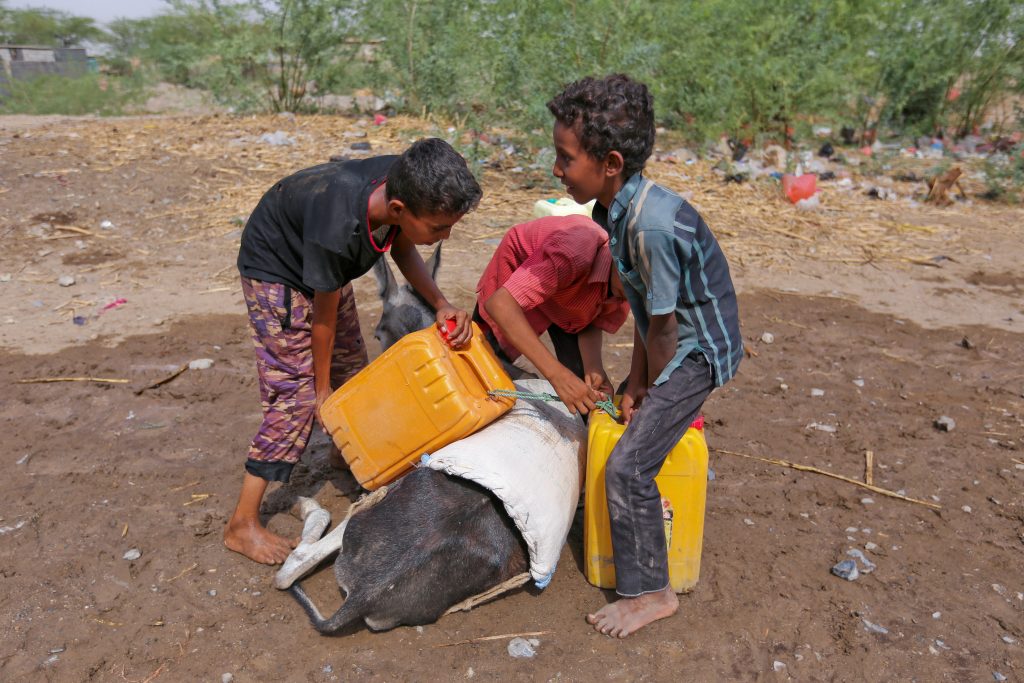 Boys load jerry cans of drinking water onto a donkey in Bajil in western Yemen. Photo by Abduljabbar Zeyad/Reuters

What’s exacerbating the problem? An ongoing civil war, where people don’t have access to clean water and food, and can’t leave their towns to get medical care because they’re worried about safety, and trash left in streets, are some of the contributing factors.

What is being done? Whenever possible, health workers travel to places that have reported suspected cases of cholera. They check on and treat the patient, and educate and reassure the community, which is usually in a “state of panic” at that point. Organizations such as the National Foundation for Development and Humanitarian Response also talk to people about cleaning trash from the streets and hand out chlorine tablets for whatever water sources are available.

The World Health Organization, partner aid groups and the Yemen Health Ministry have set up 47 diarrhea treatment centers and 278 oral dehydration centers in 16 governorates. A two-dose vaccination campaign is expected to launch next year in high-risk areas. 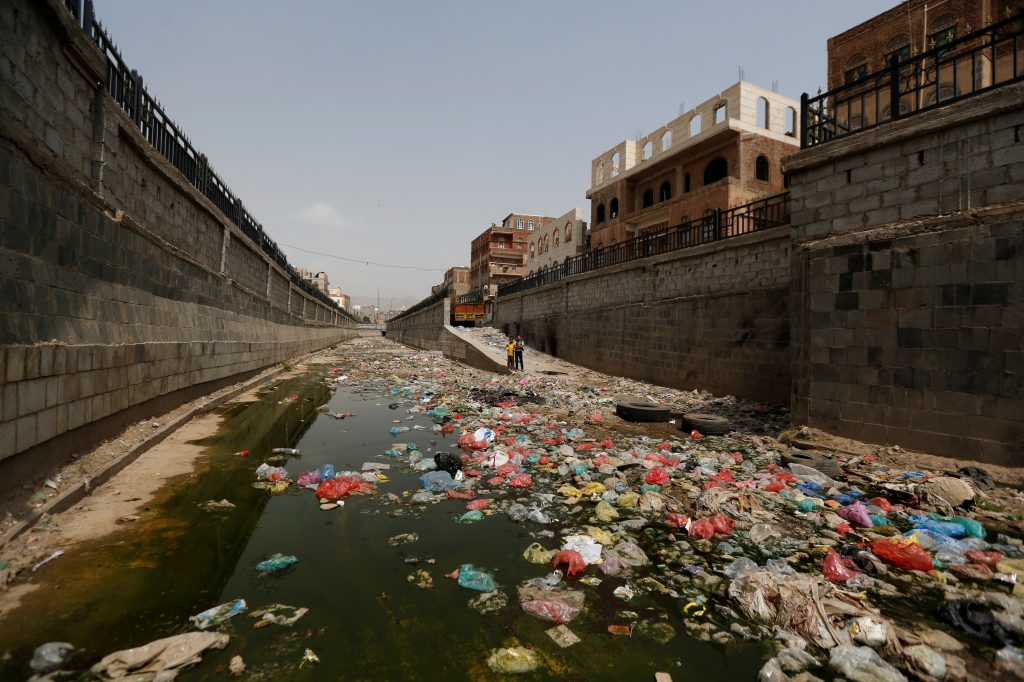 In Yemen, health workers advise communities to clean up the trash in streets and sewage channels. Photo by Khaled Abdullah/Reuters 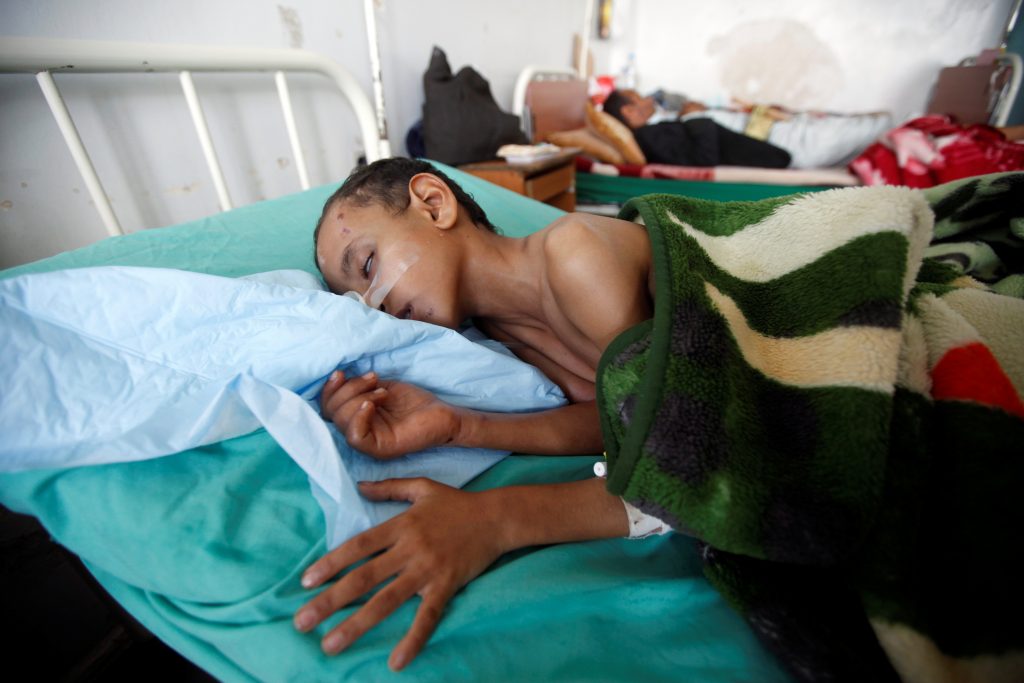 A boy lies in a hospital in Yemen’s capital Sanaa on July 27. There are more than 400,000 suspected cases of cholera in the country, according to the Health Ministry. Photo by Mohamed al-Sayaghi/Reuters 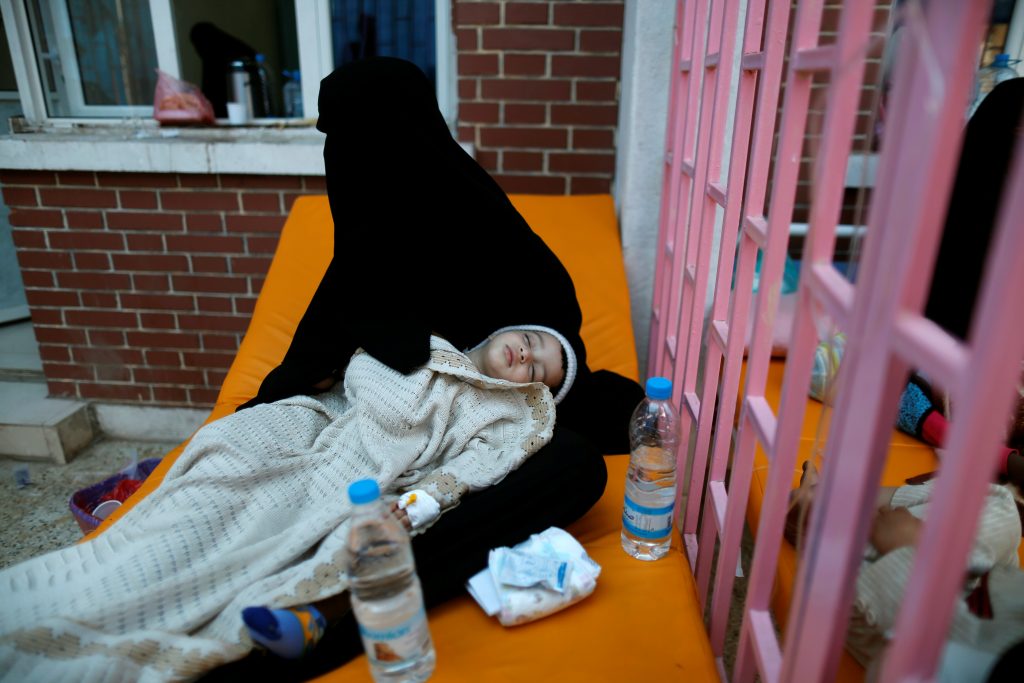 A woman holds her son, who is suspected of being infected with cholera, at a treatment center in Sanaa, Yemen in May. Photo by Khaled Abdullah/Reuters 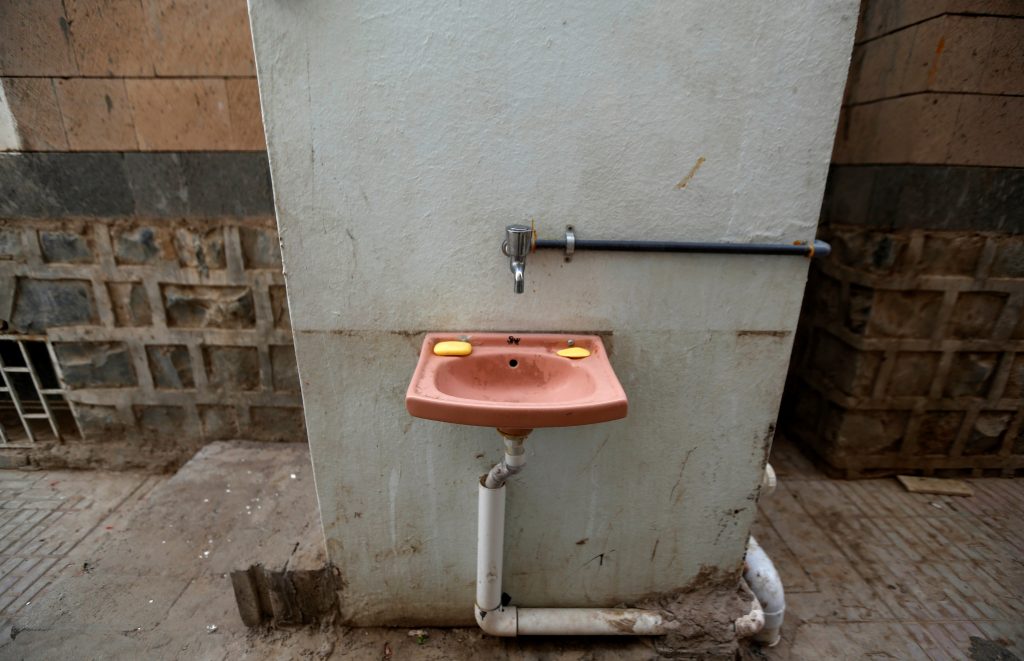 A sink is seen outside a cholera treatment center in Sanaa, Yemen. The World Health Organization has helped the government set up 47 diarrhea treatment facilities and 278 oral dehydration centers in the country. Photo by Khaled Abdullah/Reuters 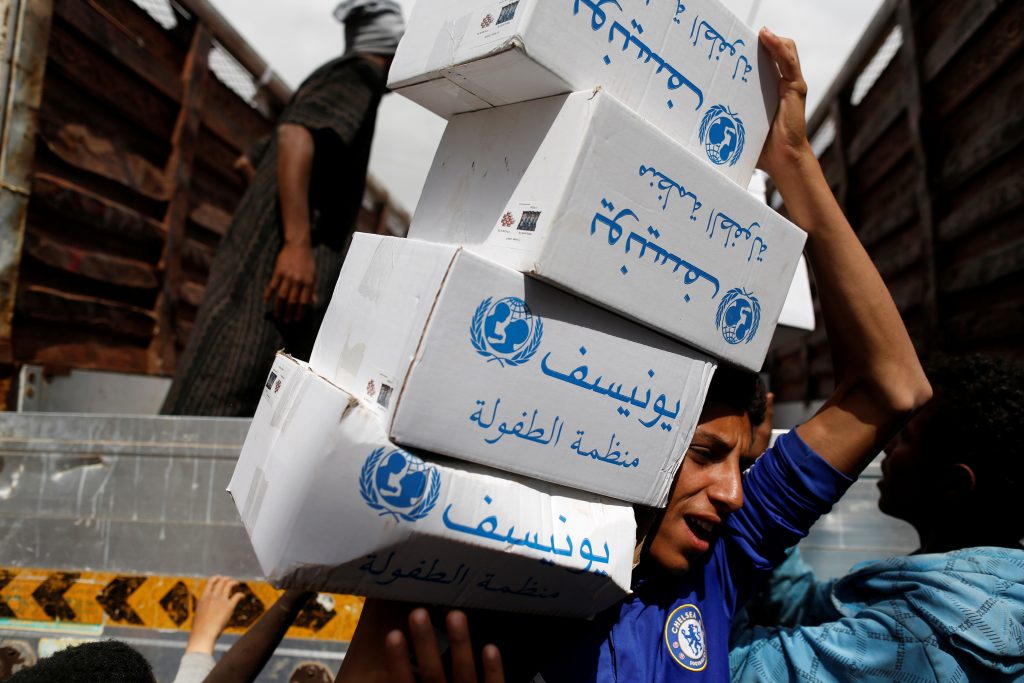 Watch a PBS NewsHour report on the food crisis and cholera outbreak in Yemen.

READ MORE: Attacks in Syria and Yemen are turning disease into weapon of war

Left: People surround a tanker of water to fill their jerry cans during Yemen's cholera outbreak. Photo by Abduljabbar Zeyad/Reuters