Photos: Armenians focus on survivors of massacre 100 years ago

Today marks the 100th anniversary of the slaughter of more than 1 million Armenians by the Ottoman Empire during World War I. In the weeks leading up to the anniversary, people around the world have remembered the lives lost through vigils, memorials and wreath-laying ceremonies.

The anniversary also has revived the debate over whether the mass killings should be called “genocide.” 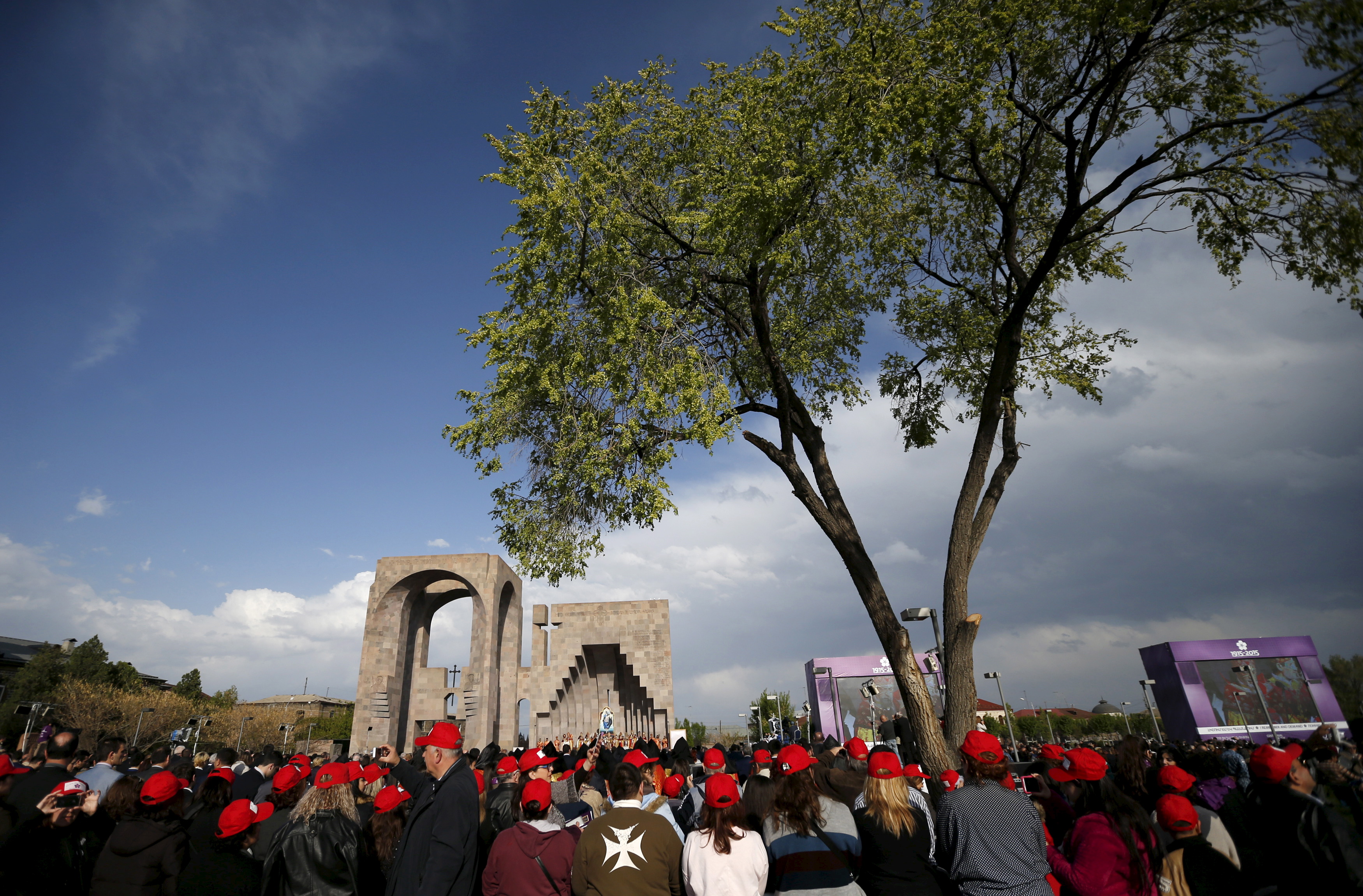 People attend a canonization ceremony for the victims of mass killings of Armenians by Ottoman Turks at the open-air altar of Armenia’s main cathedral in Echmiadzin on Thursday. Photo by David Mdzinarishvili/Reuters

The deaths of an estimated 1.5 million Armenians at the hands of Ottoman Turks, who were concerned about their allegiance during the war, began on April 24, 1915, with the arrests of 250 Armenian community leaders in Constantinople and continued with the systematic killing of males and the deportation of women and children. Armenia and other countries recognize it as the first genocide of the 20th century, but Turkey has long denied the term “genocide,” saying the deaths were inflated and due to a civil war that killed many Turks as well. 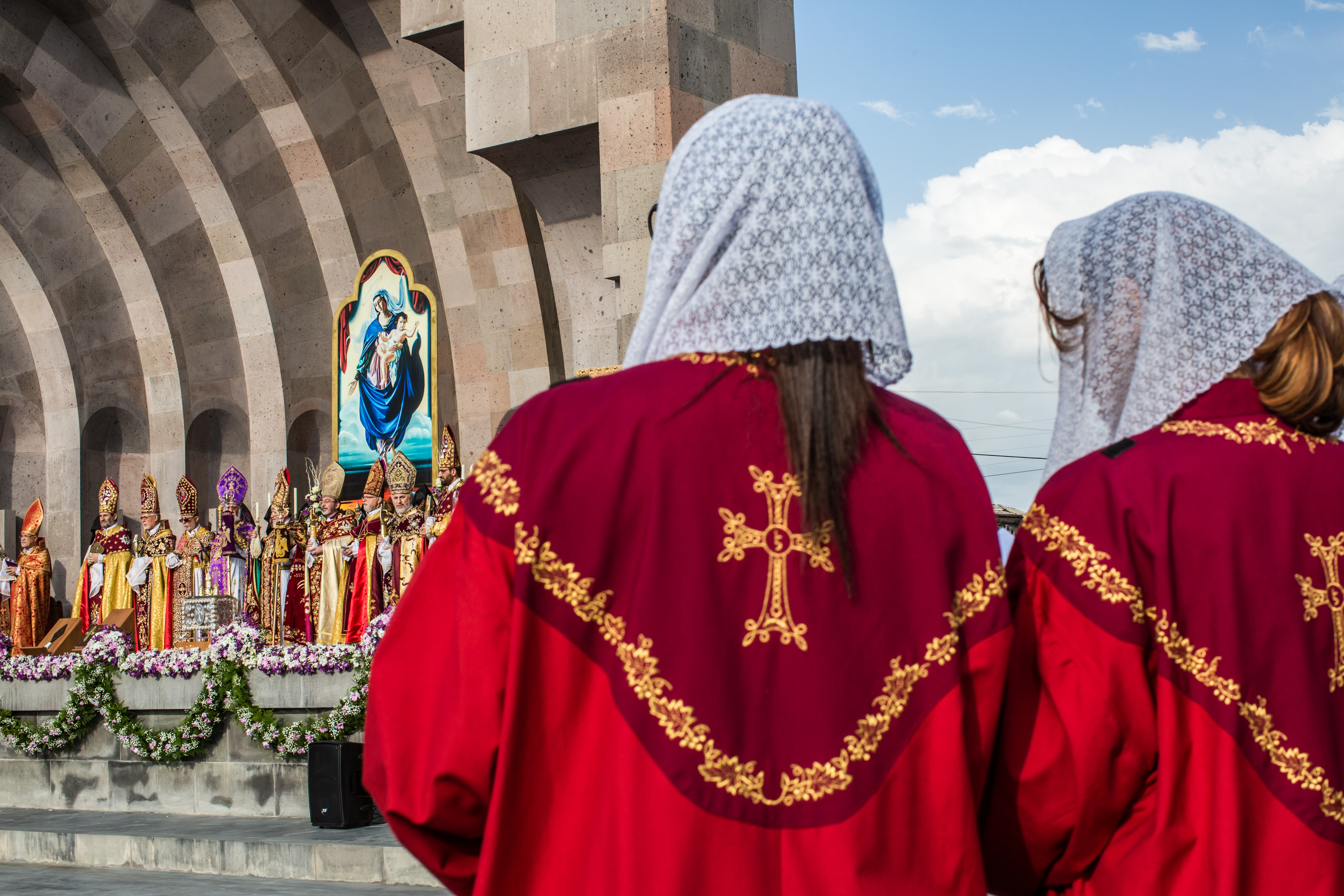 Pope Francis called it a genocide during an Armenian rite service at St. Peter’s Basilica in Italy on April 12 to mark the anniversary, prompting condemnation from Turkish President Recep Tayyip Erdogan and a recall of Turkey’s envoy from the Vatican. 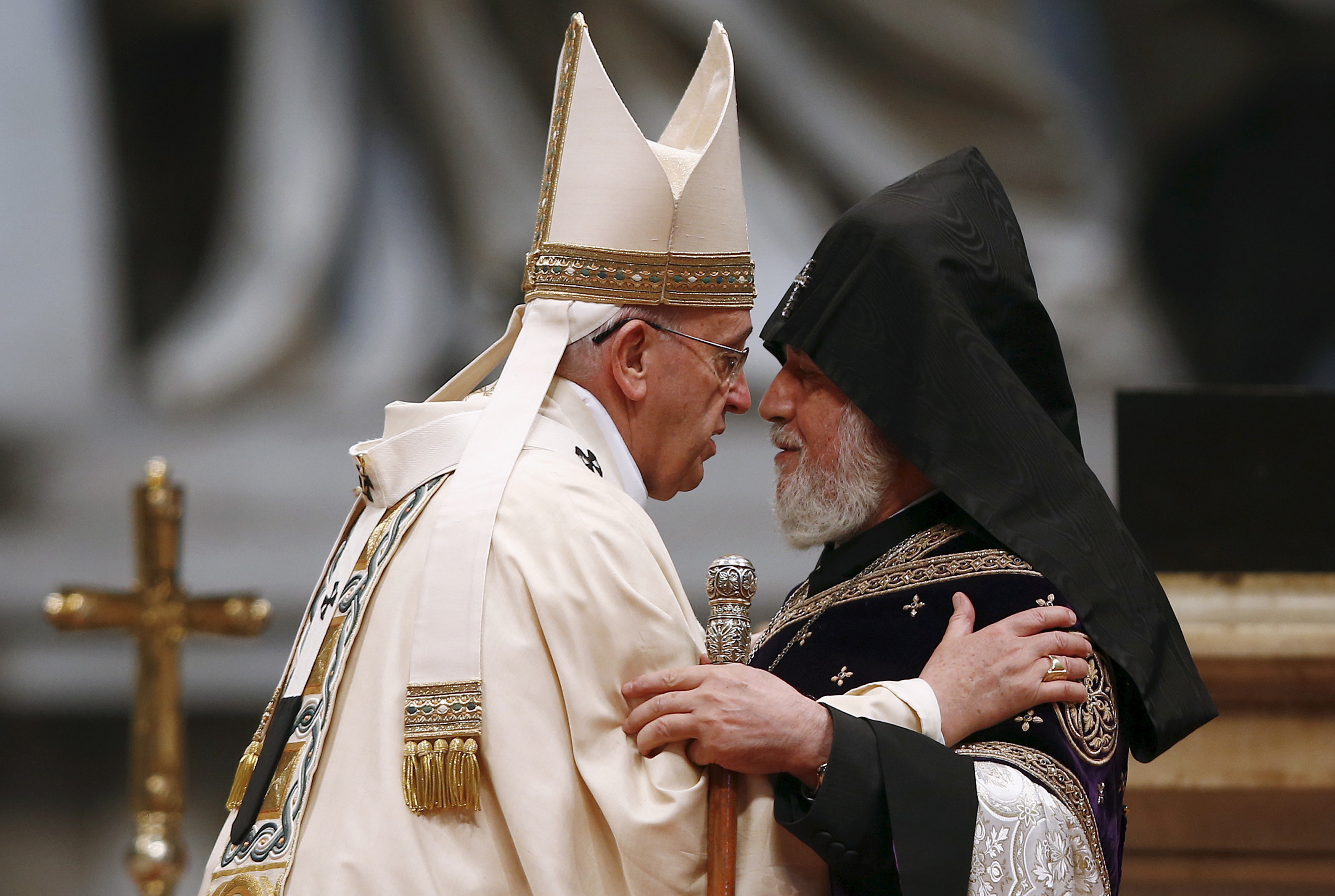 Pope Francis, left, embraces Catholicos of All Armenians Karekin II during a mass on the 100th anniversary of the Armenian mass killings, in St. Peter’s Basilica at the Vatican on April 12. He called on the international community to acknowledge the Armenian “genocide” at the service. Photo by Tony Gentile/Reuters

The European Parliament rose to the pope’s defense, and days later approved a resolution — similar to one in 1987 — calling the mass killings of Armenians a “genocide.”

The White House avoided the sensitive term in a statement issued Thursday for Armenian Remembrance Day, instead calling the events of 1915 “the first mass atrocity of the 20th century.”

The statement said in part: “A full, frank, and just acknowledgement of the facts is in all our interests. Peoples and nations grow stronger, and build a foundation for a more just and tolerant future, by acknowledging and reckoning with painful elements of the past. We welcome the expression of views by Pope Francis, Turkish and Armenian historians, and the many others who have sought to shed light on this dark chapter of history.” 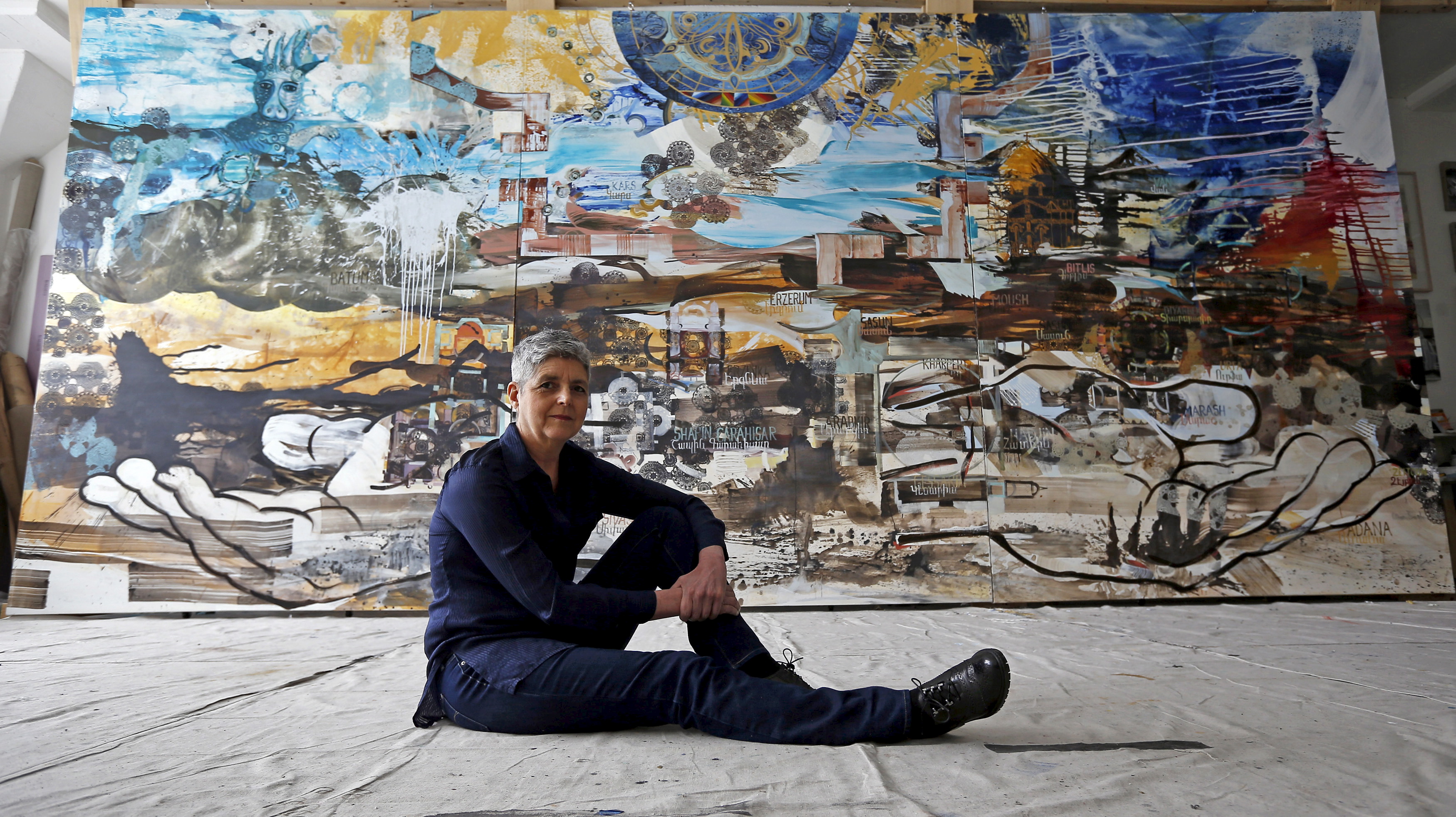 Artist Jackie Kazarian poses in front of her mural “Project 1915” depicting Armenia’s history and a culture “that has that has survived for 3,000 years,” she says. Her work will be on display at Chicago’s Mana Contemporary until May 29, 2015. Photo by Jim Young/Reuters

Others, like Armenian-American artist Jackie Kazarian, want to focus on the survivors. Her grandparents were born in historic Armenia in what is now eastern Turkey. Their escape and move to the United States in the early 20th century motivated the Chicago-based painter to create a massive work of art, 27 feet wide and 11.5 feet tall, to commemorate the centennial but not its sorrow.

“What happened in 1915 is horrific, but there are a lot of people and artists who have already captured the terror of what happened, so I’m really interested in doing something else … celebrating the culture and the vitality of Armenian people that survived,” she says in a video about her work. 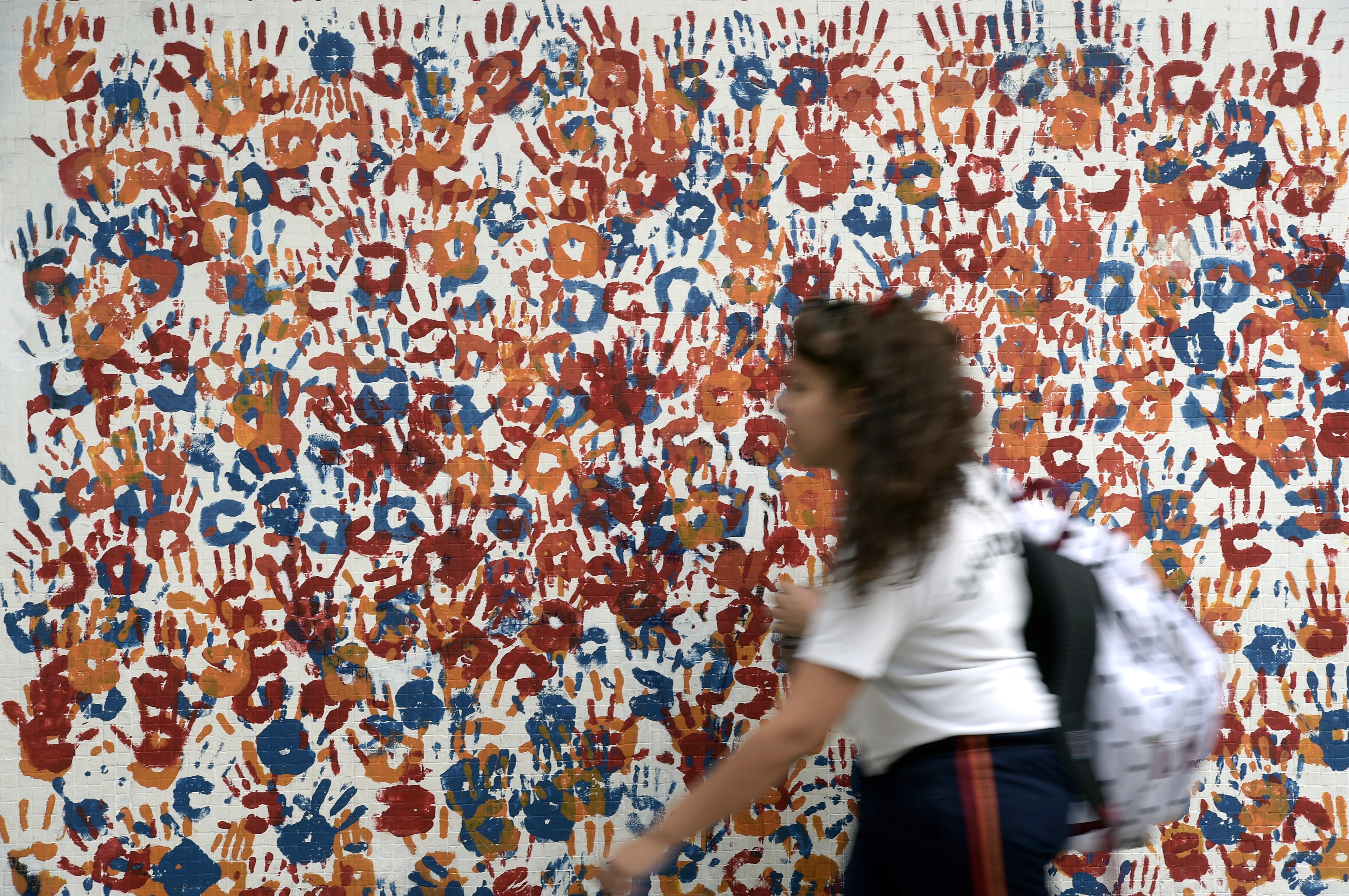 Schoolchildren painted a mural on April 15 using the colors of the Armenian flag at the Argentine-Armenian school Jrimian, founded in 1930 by Armenian refugees, outside Buenos Aires. Photo by Juan Mabromata/AFP/Getty Image 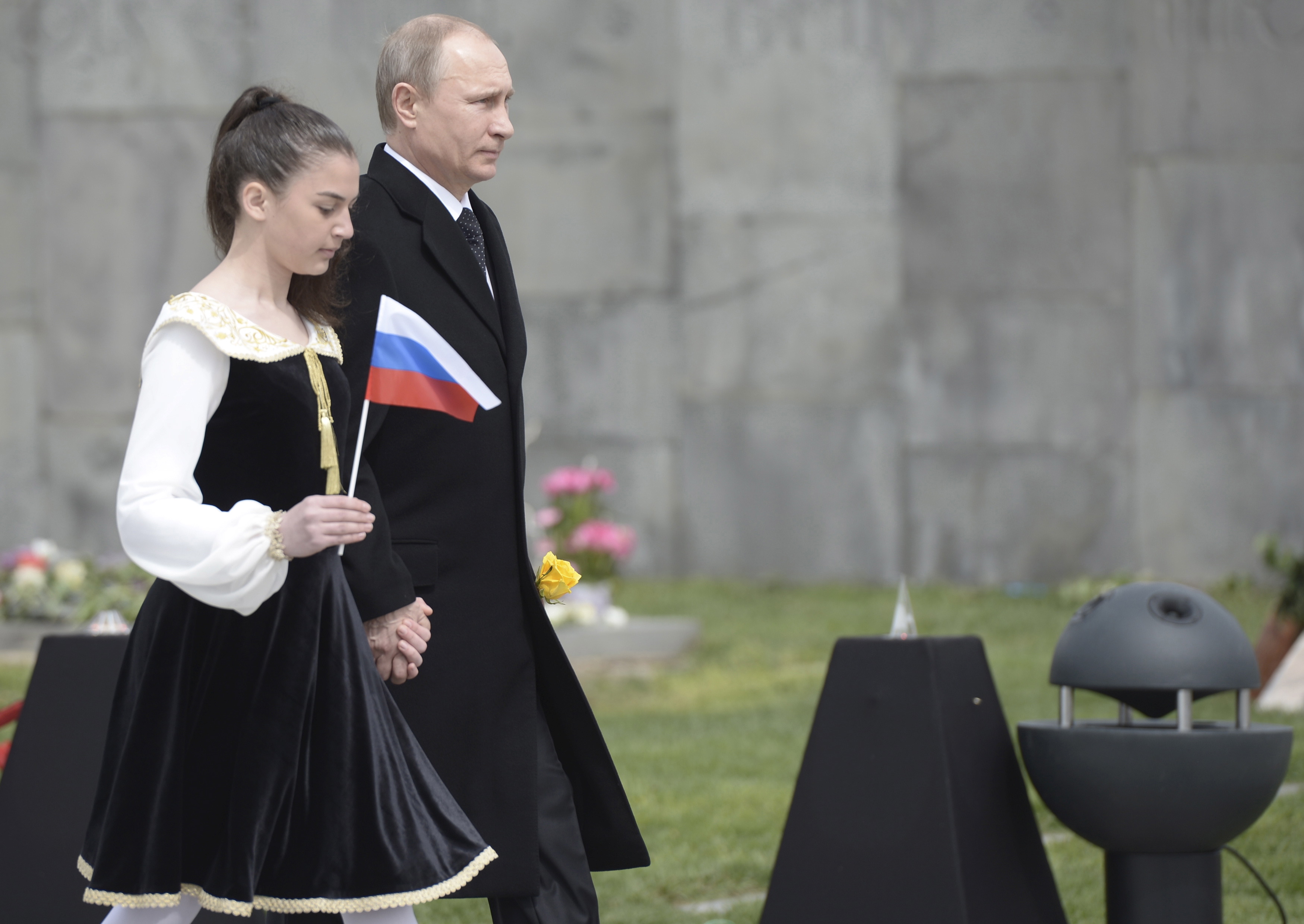 Russia’s President Vladimir Putin, right, attends a commemoration ceremony on Friday marking the centenary of the mass killing of Armenians by Ottoman Turks in Yerevan, Armenia. Photo by Alexei Nikolsky/RIA Novosti/Kremlin via Reuters 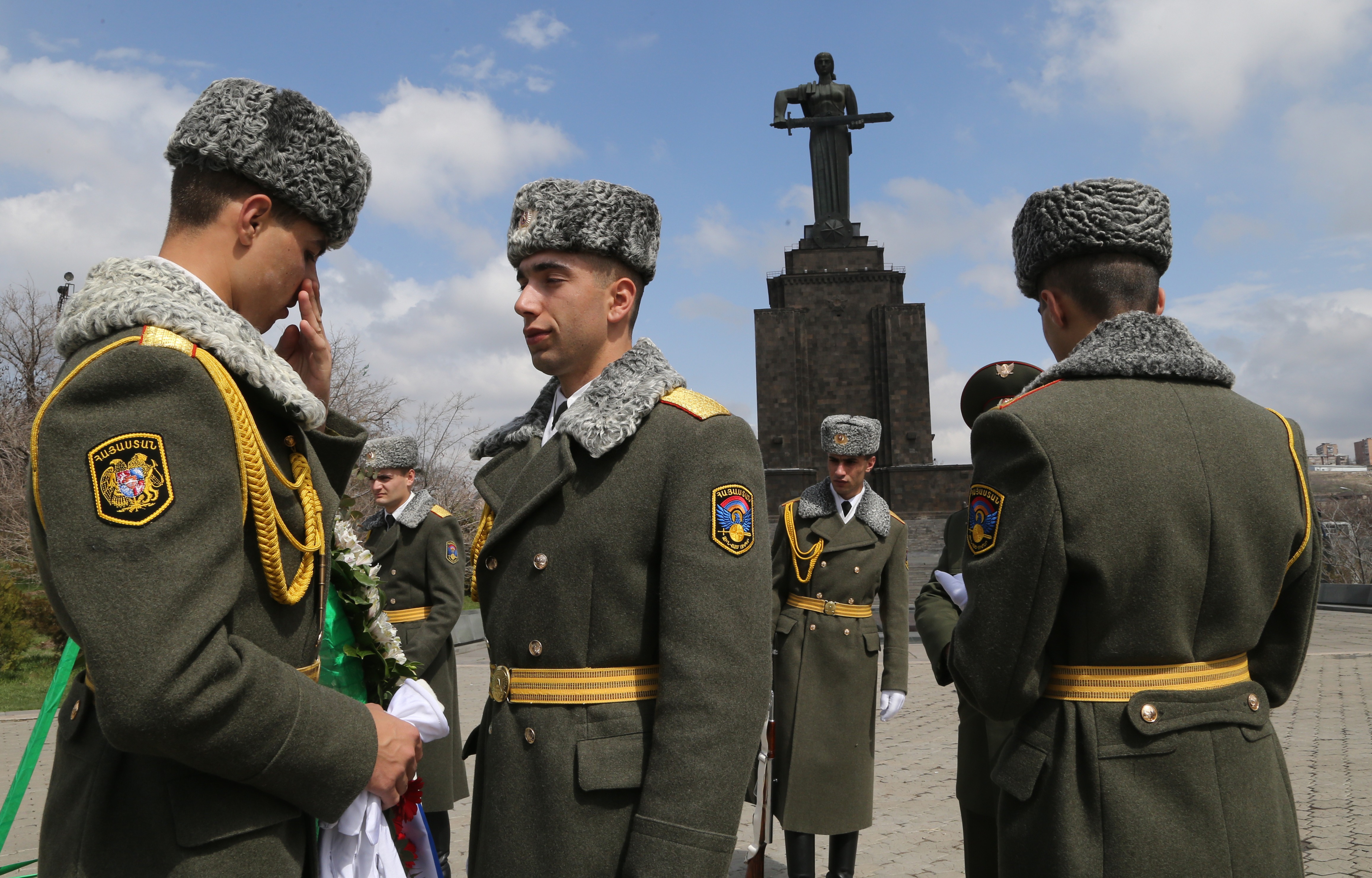 Armenian guards prepare for a wreath-laying ceremony at the Mother Armenia Statue in the capital Yerevan on March 30, 2015. Photo by Sasha Mordovets/Getty Images 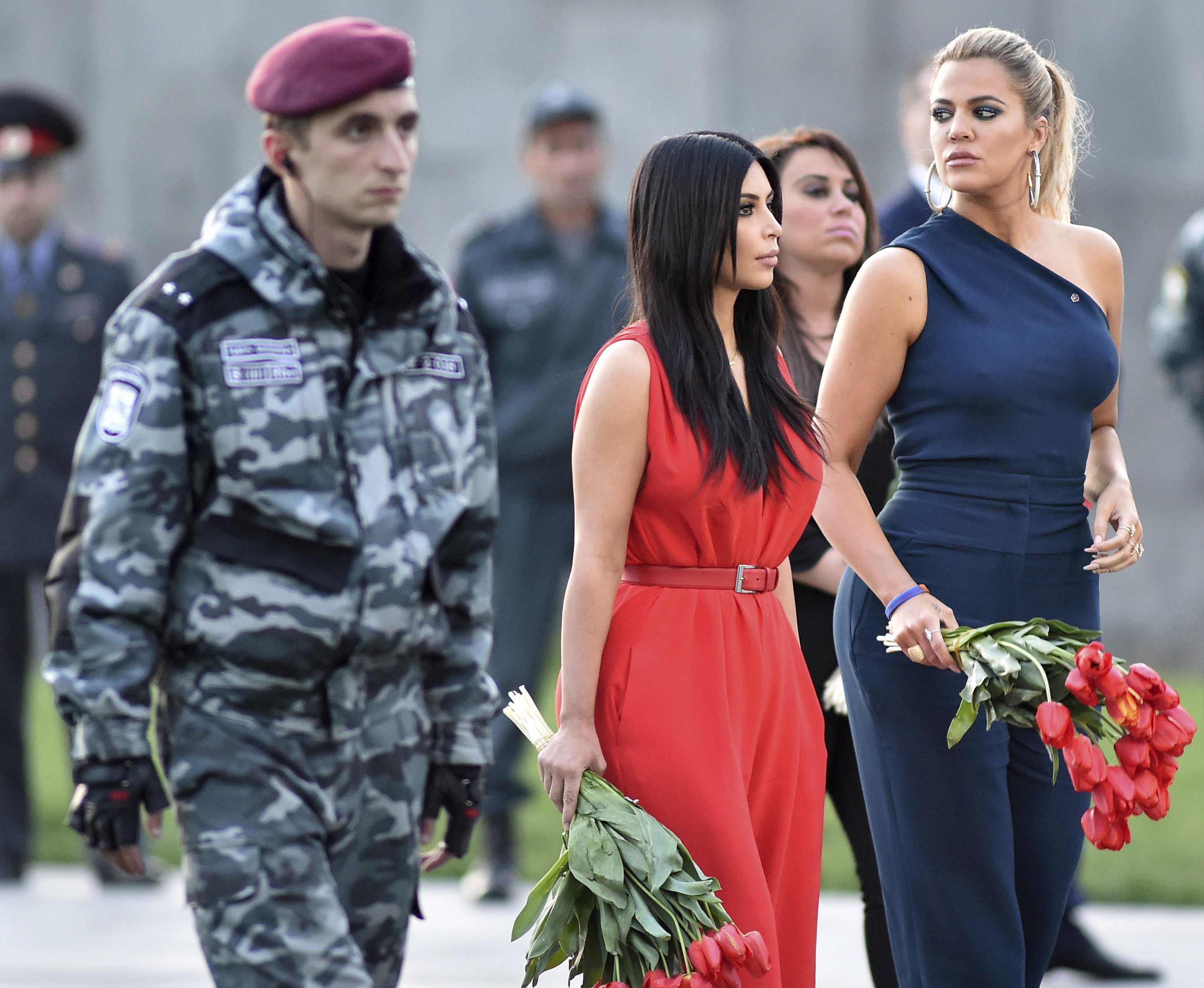 Television reality stars Kim Kardashian, center, and her sister Khloe Kardashian visit their ancestral homeland of Armenia and lay flowers at the Tsitsernakaberd Armenian Genocide Memorial and Museum in Yerevan on April 10. Photo by Hayk Baghdasaryan/Photolure via Reuters

Left: The year 1915 is formed with candles during a memorial march by Armenians in front of the Brandenburg Gate after an Ecumenical service marking the 100th anniversary of the mass killings of 1.5 million Armenians by Ottoman Turkish forces, at the cathedral in Berlin on April 23, 2015. German President Joachim Gauck on Thursday condemned the massacre of 1.5 million Armenians by Ottoman Turkish forces a century ago as "genocide" in a speech. Turkey vehemently denies the charge. Photo by Fabrizio Bensch/Reuters