Photos: Children are most vulnerable in the refugee crisis

As countries bordering Syria reach capacity, more and more refugees are making the difficult decision to leave for an entirely different continent.

“People are feeling like they’re running out of options to be able to make a life in the bordering countries,” where resources are overstretched and aid organizations are experiencing funding shortfalls, said Holly Frew, emergency communications officer with CARE USA. Frew visited several refugee encampments in Turkey and Jordan in August.

“Most everyone we talked to said they would like to go back to Syria,” she said. But absent that option, those who can scrape together enough money to pay for transportation risk crossing the Mediterranean Sea to enter Greece and then try to go on to Germany where they hope they will be welcome.

Nearly 400,000 migrants have made the treacherous boat ride to Greece since Jan. 1, according to the U.N. High Commissioner for Refugees. Most came from Syria (70 percent), Afghanistan (18 percent) and Iraq (4 percent).

About 1 million of the Syrian refugees who have sought safety in neighboring countries are children, and their lives are upended. “The children who had never missed a day of school are having to work instead so that [their families] can survive and have food on the table,” said Frew.

Sometimes families are separated along the way. Frew met an English teacher and her husband, an electrician, who were finally reunited after spending three months apart at different refugee camps. He had stayed behind in Syria to defend their home and was injured when it was barrel-bombed. She faced her own harrowing trek with their son, calling it the “journey of death.” 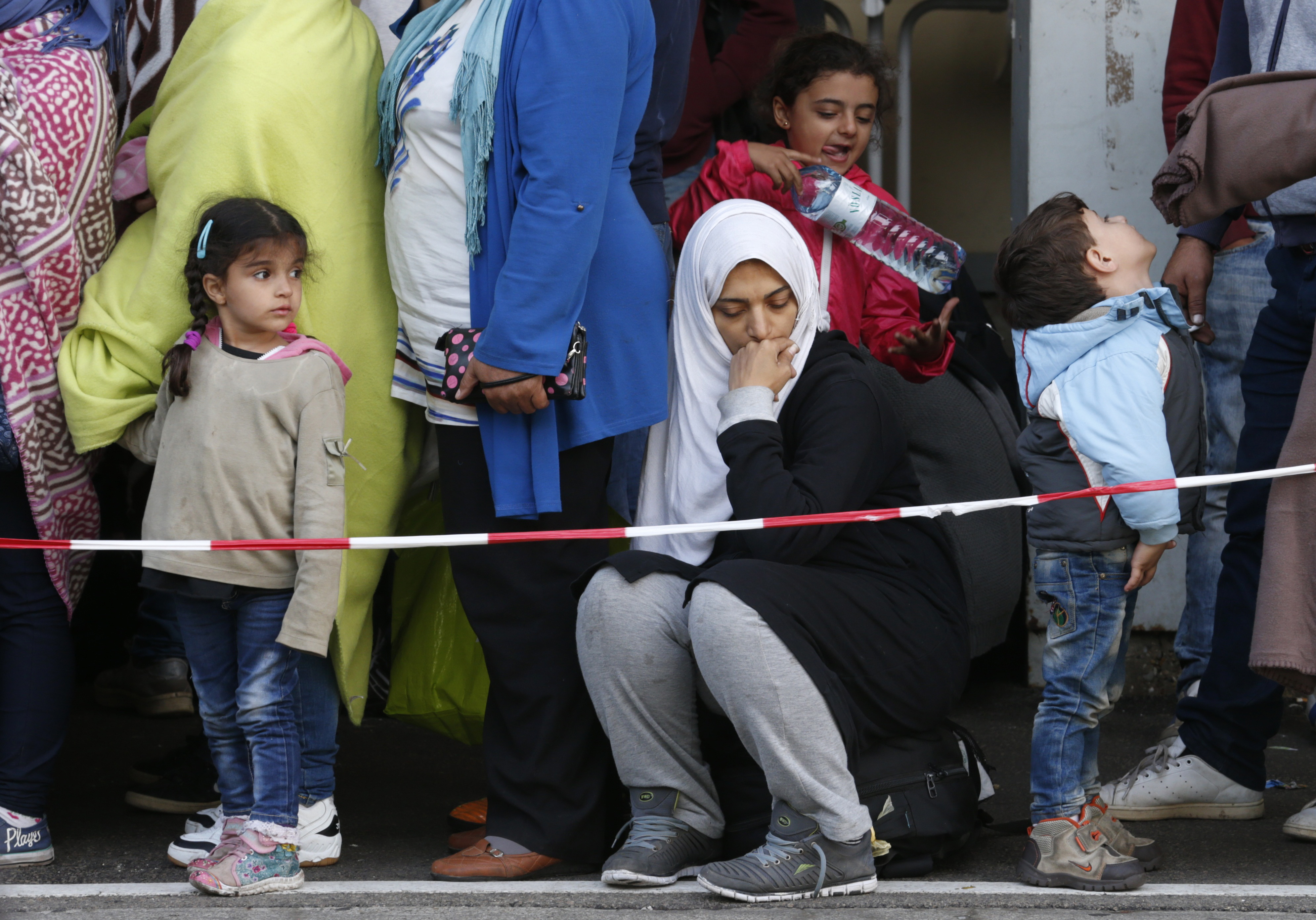 Migrants wait for trains at the Wien Westbahnhof in Vienna, Austria, on Sept. 10, 2015. Photo by Heinz-Peter Bader/Reuters 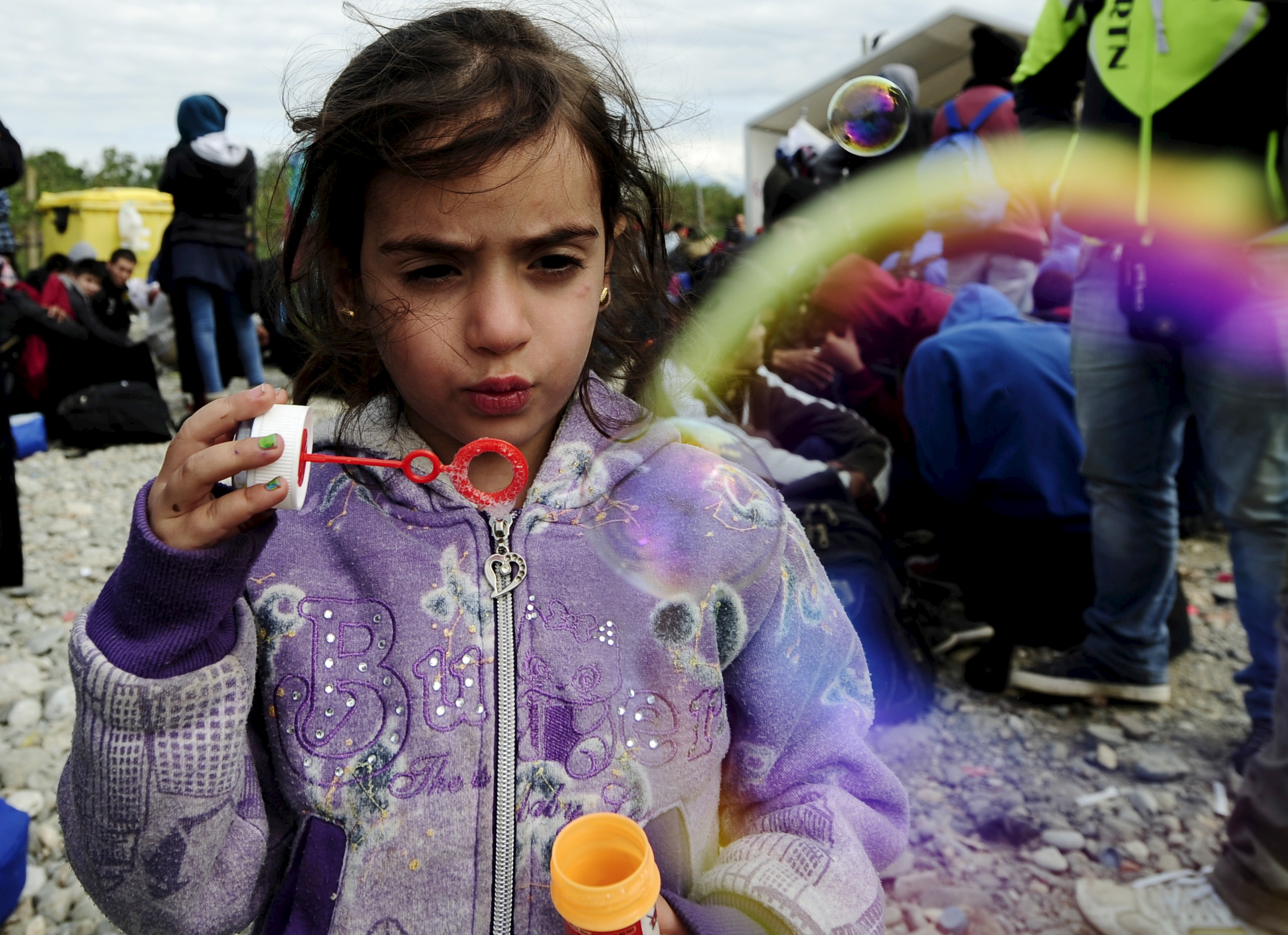 A migrant child blows soap bubbles at a transit camp in Gevgelija, Macedonia, after entering the country by crossing the border with Greece on Sept. 29, 2015. Save the Children estimates that about 5 million Syrian children are in need of assistance, including 1 million who have moved to neighboring countries in the Middle East. Photo by OgnenTeofilovski/Reuters 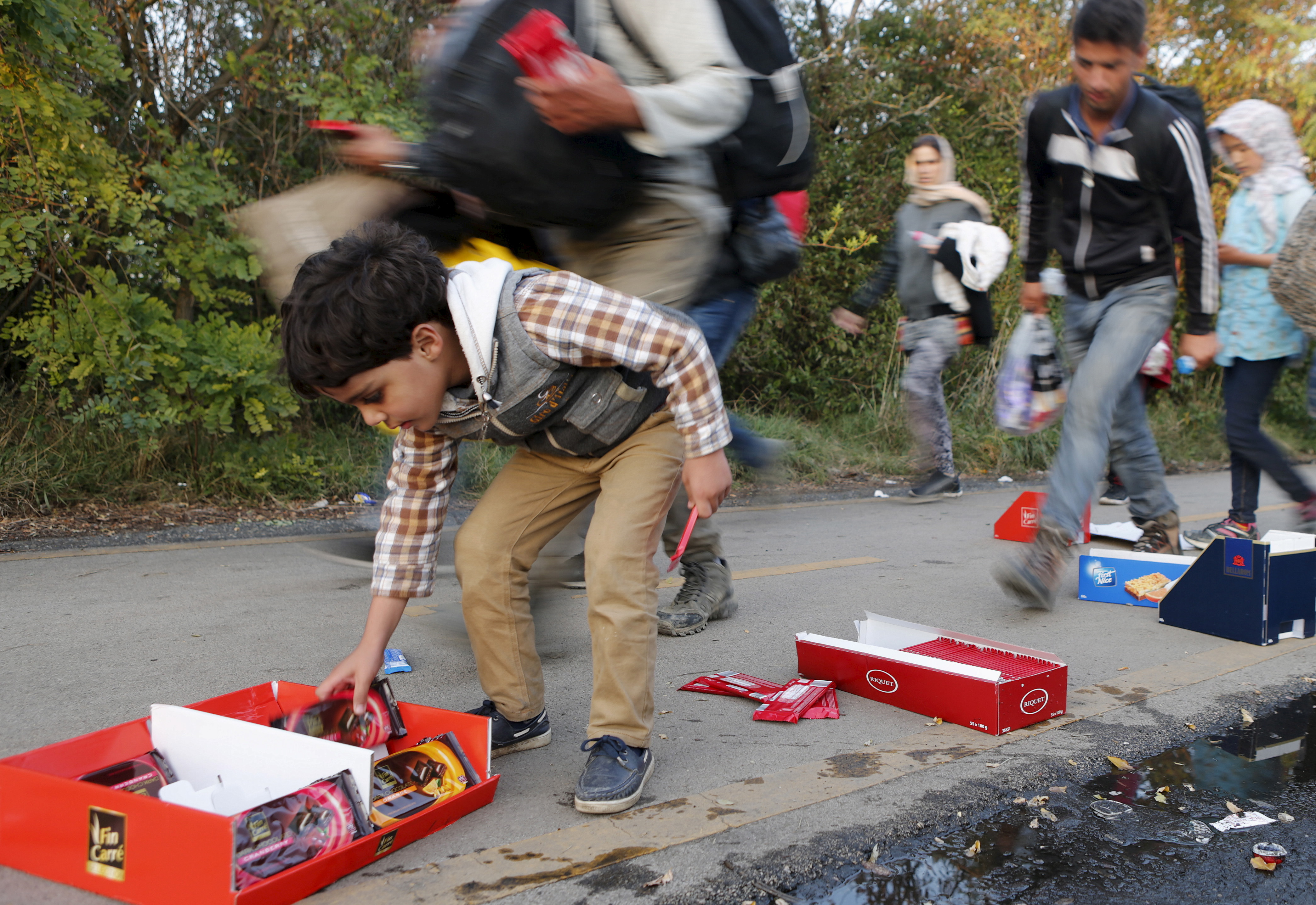 A child reaches for candy that had been placed by the road on the way to Austria, in Hegyeshalom, Hungary, on Sept. 27, 2015. Tens of thousands of migrants, most of them fleeing war and hardship in Syria, are trying to reach Western Europe. Photo by Heinz-Peter Bader/Reuters 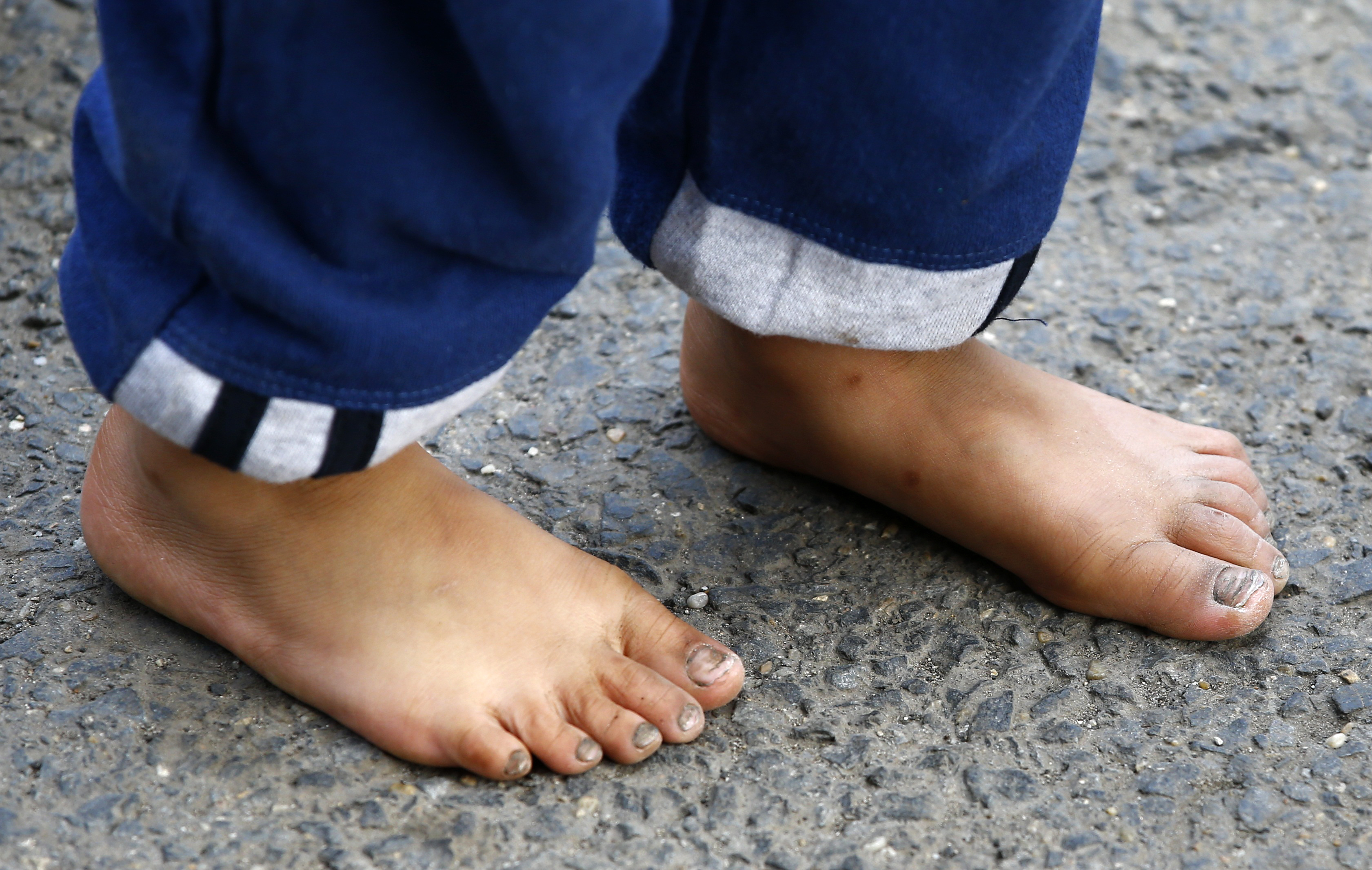 Migrants walk toward the Austrian border from Hegyeshalom, Hungary, on Sept. 24, 2015. Photo by Leonhard Foeger/Reuters 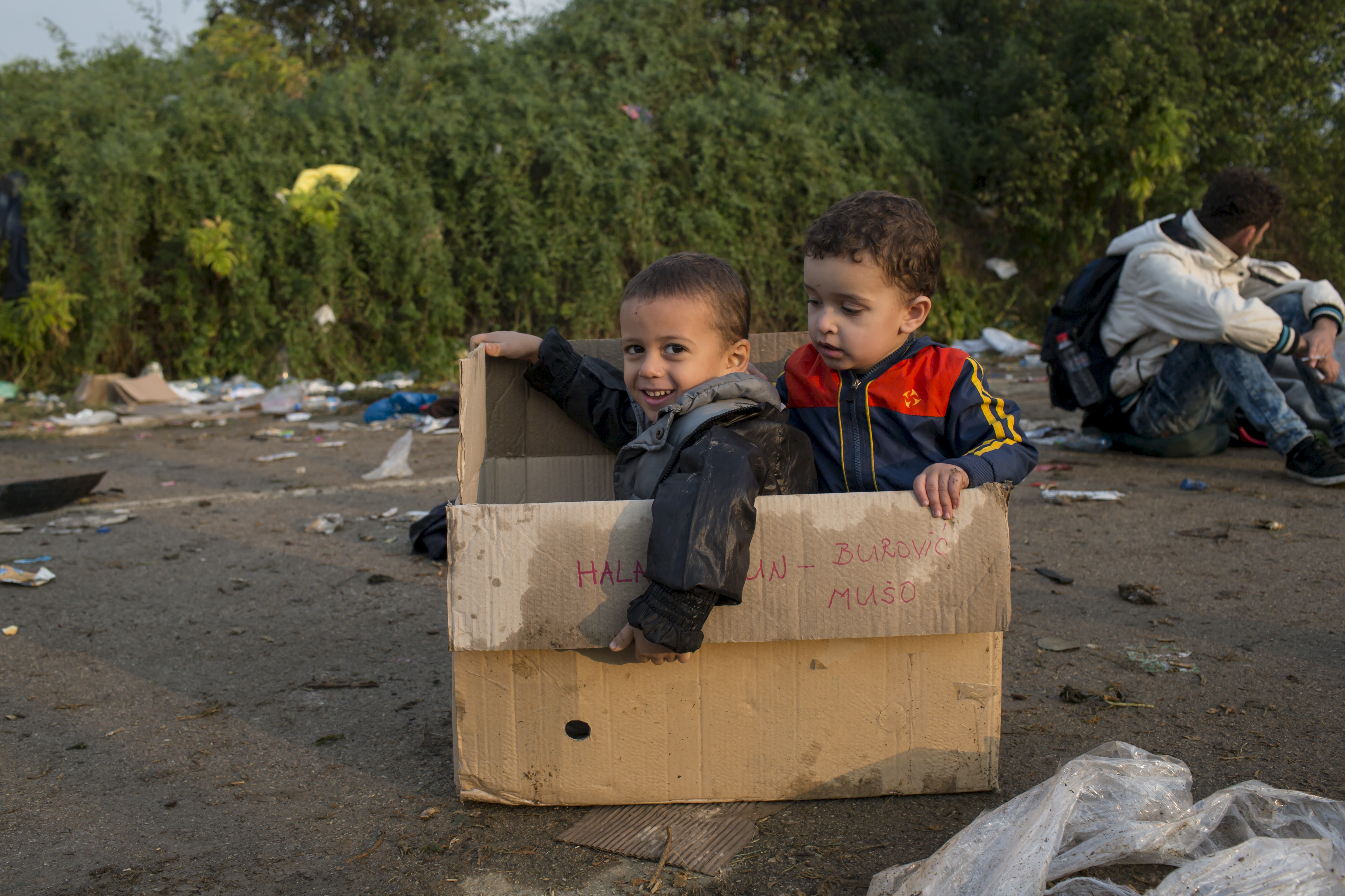 Children sit in a box as they wait to board buses after crossing the border with Serbia, near the village of Babska, Croatia, on Sept. 24, 2015. Photo by Marko Djurica/Reuters 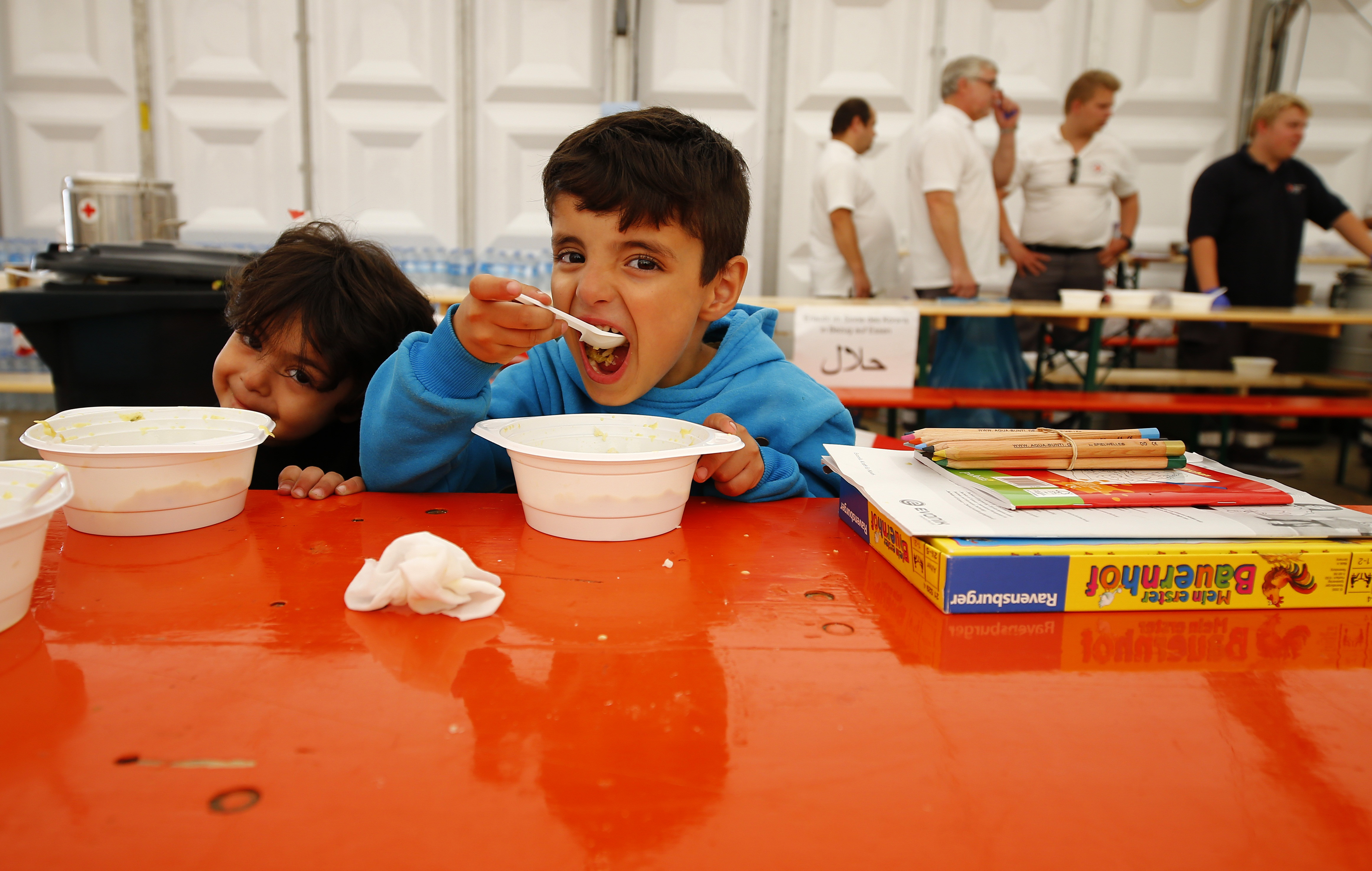 A child eats at a temporary shelter in a sports hall in Hanau, Germany, on Sept. 18, 2015. UNICEF and other aid organizations are working to provide child-friendly spaces at reception centers. Photo by Kai Pfaffenbach/Reuters 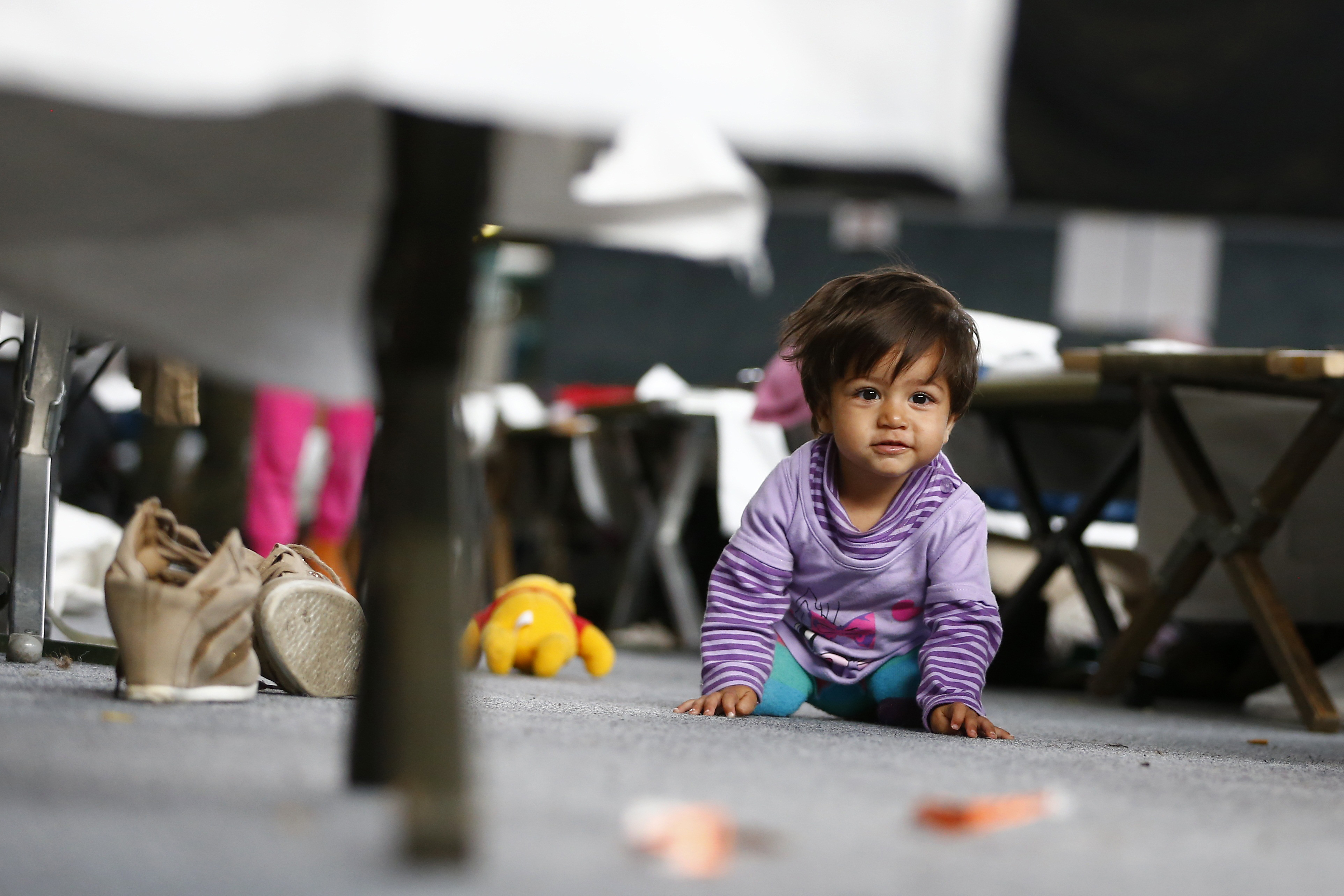 A migrant child looks on as it sits on the ground at an improvised temporary shelter in a sports hall in Hanau, Germany, on Sept. 24, 2015. Photo by Kai Pfaffenbach/Reuters 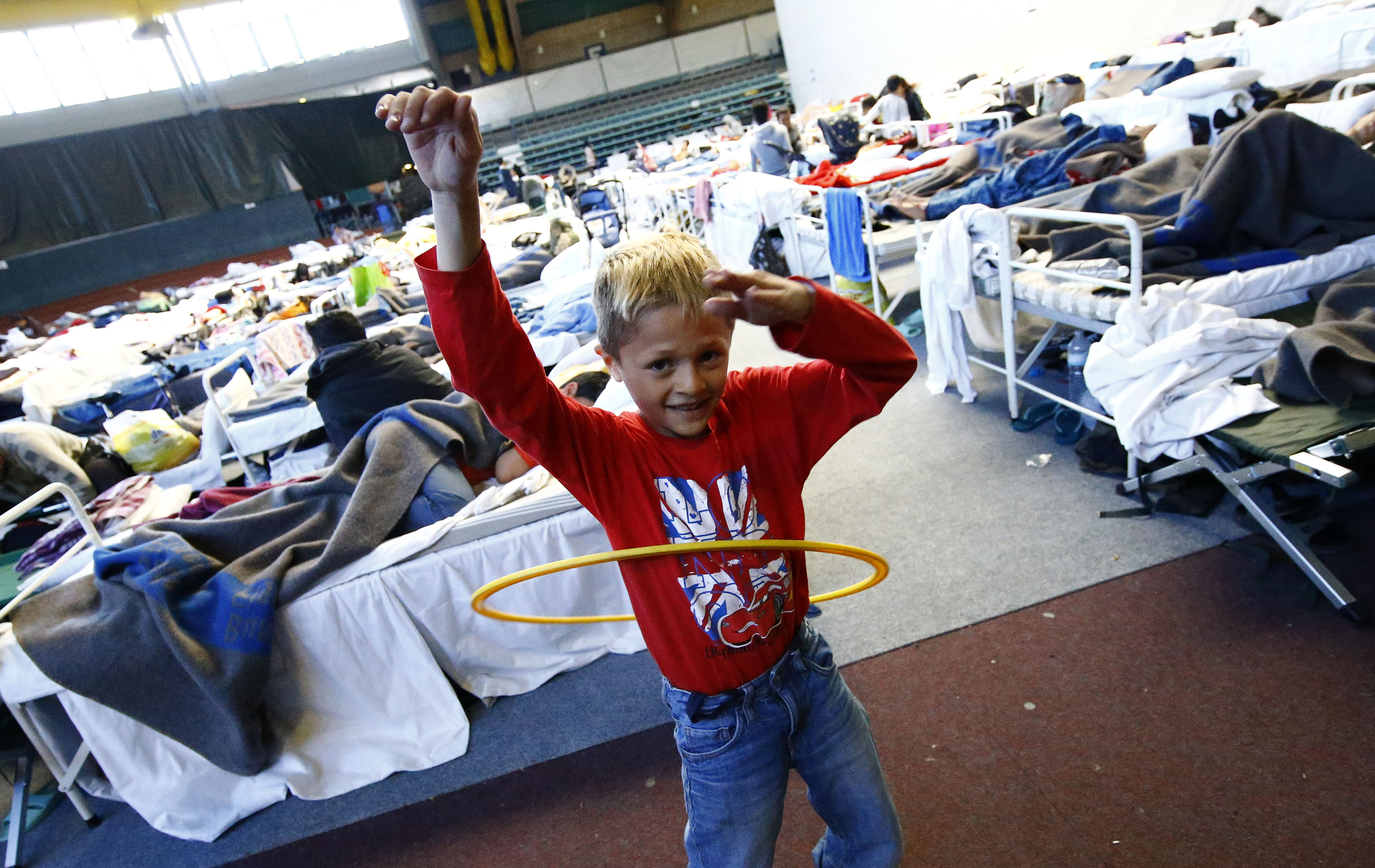 A child plays with a hoola hoop at a temporary shelter in a sports hall in Hanau, Germany, on Oct. 1, 2015. Photo by Kai Pfaffenbach/Reuters

Left: Migrants stand in a field as they wait for buses to take them to shelters after they crossed the border from Serbia, near Tovarnik, Croatia, on Sept. 24, 2015. Photo by Marko Djurica/Reuters