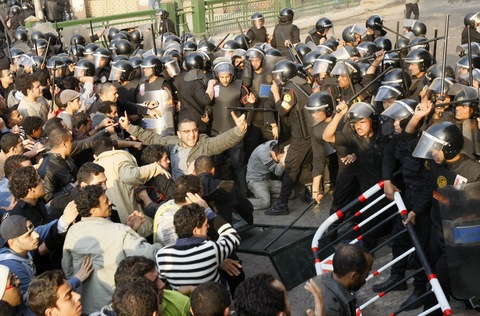 Thousands of demonstrators have taken to the streets of Egypt’s capital in an unusual spate of anti-government protests, spurred by online postings in the wake of mass protests in Tunisia that unseated its president.

Al Jazeera reports that Cairo ground to a halt from the demonstrations, the likes of which the capital hasn’t seen since the 1970s:

>”The anti-government protesters, some hurling rocks and climbing atop an armored police truck, were chanting slogans against Mubarak, who has ruled the country for three decades.”

Christian Science Monitor correspondent Kristen Chick, who was at the scene, said the protesters ran the gamut:

Organizers of the protests set up a page on Facebook, where an estimated 90,000 people signed up for the gathering, which took place without required permits.

Police have used tear gas and water canons in an effort to dispel the protesters near the country’s parliament building, but the turnout has appeared to be higher than organizers or police expected. As people gathered in Tahrir Square, security forces were met with rock-throwing protesters.

Demonstrators are seeking the ouster of President Hosni Mubarak, who has been in power since 1981. In addition, protesters are demanding the removal of Interior Minster Habib al-Adly, whose police and security forces have been accused of heavy-handedness; the removal of a decades-old emergency law that lets police arrest people without charge, among other measures; and a rise in minimum wages, reported the Agence France-Presse.

Robert Danin, a senior fellow for Middle East and Africa studies at the Council on Foreign Relations, said the events in Tunisia had a galvanizing effect on Egyptians. “It’s too early to call this the next Tunisia, but it’s too big not to take it seriously,” he said.

At the same time, the economic challenges and the gap between the rich and poor in Egypt are vast, and job creation is a huge issue, he said. This is a 40-year regime that has to provide some alternatives, he added.

So far, the government has handled internal upheaval by blaming it on outside forces, such as al-Qaida, Danin continued. “In Egypt, there is a fear of chaos. People don’t want violence and the authorities are trying to play on that” and trying to create the sense that they are protecting their citizens from outside forces, rather than an indigenous movement.

And time will tell whether it is an actual movement or a one-day event, he said.