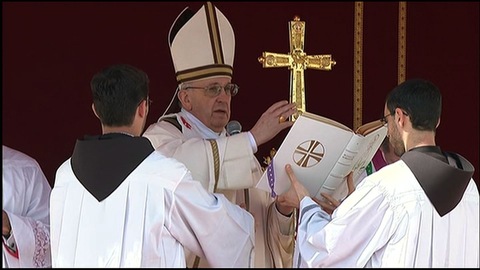 Updated March 19 at 5:40 p.m. ET: Pope Francis officially became the leader of the Roman Catholic Church on Tuesday in a ceremony at the Vatican, where he urged those with leadership responsibilities and all others to respect one another and protect “God’s gifts” of creation.

Tenderness is not a virtue of the weak but of the strong, he said during the homily of his installation Mass in St. Peter’s Square. “Let us remember that hatred, envy and pride defile our lives.”

The inaugural Mass was attended by 132 government delegations, representatives of Christian, Jewish, Muslim, Buddhist and other faiths, and thousands of other well-wishers and onlookers.

Before the ceremony, Pope Francis received the fisherman’s ring made of silver and gold that shows the image of St. Peter, and the pallium — a lamb’s wool wrap bearing five red crosses which represents the Good Shepherd who carried the lost sheep on his shoulders.

Pope Francis, the first Jesuit pope, was elected by the College of Cardinals on March 13 after Pope Benedict XVI announced his retirement last month.

Prior to the ceremony, Pope Francis visited the crowd, blessing babies and a disabled man:

Tuesday afternoon, NewsHour senior correspondent Jeffrey Brown spoke with John Allen of the National Catholic Reporter and CNN about the challenges Pope Francis faces. Allen said one such issue is the growing concern that Vatican leaders have not been seen as very responsive to the role of women in the Catholic Church.

You can watch the full interview on Tuesday’s broadcast. Read all of the NewsHour’s Papal Transition coverage and follow us on Twitter: