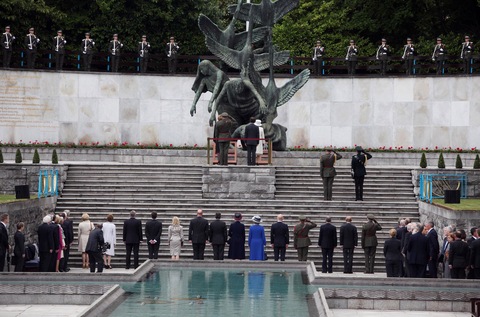 Queen Elizabeth II began her visit to Ireland doing something many Irish thought they would never see — laying a wreath at the memorial to those who died fighting for the country’s freedom from British rule.

It was an “enormous gesture of reconciliation” by the Queen and a lift to the economically troubled country, said GlobalPost’s reporter in Dublin, Conor O’Clery. This is the first time a British monarch has visited Ireland since it won independence in 1921.

The Queen continues her solemn tour Wednesday by visiting Croke Park, the stadium where British troops shot 13 spectators and an athlete in retaliation for the killing of 14 British intelligence officers by Irish revolutionary Michael Collins’ squad. 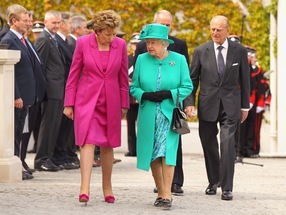 “She’ll see a display of Gaelic games there,” said O’Clery. “The idea of her going there would have been seen as a joke 10 or 15 years ago.”

But in the past two decades, the two countries have engaged in efforts to restore relations. Talks involving Britain, the U.S., and political parties in Ireland and Northern Ireland led to the Good Friday Agreement for Irish political self-determination and de-escalation of violence.

“Since the agreement, the relationships have been steadily improving to the point where the Queen could visit here today,” O’Clery said.

Some thought the visit came too soon — Sinn Fein’s leader said in March it was premature, though more recently he said it could advance the two countries’ mutual respect — and about 200 to 300 people protested and scuffled with police, noted O’Clery.

But in general, people accept the royal family and aren’t disturbed by the past, he said. “Now that the future of Ireland is more in the hands of the Irish people, that boil has been lanced.”

The Queen’s visit wraps up on Friday.

The BBC has photos of the day’s events. Reuters takes a look at the history of Anglo-Irish friction.