Like many other boys his age, Humayun Zadran wanted to become a rock star. But he wasn’t allowed to learn Western music while growing up in the conservative climate of Peshawar, Pakistan. Now as an adult living in Afghanistan, he’s created a space where Afghans both young and old can pursue that dream.

Zadran remembers buying bootleg albums of the bands Pink Floyd, Dire Straits and Led Zeppelin at local music shops but not being able to perform the songs himself. “To acquire an instrument such as a guitar was beyond imagination,” he said via email from Kabul, the capital of Afghanistan.

Non-religious music was forbidden under Taliban rule from the mid-1990s to 2001. After the restrictions lifted, it didn’t take long for rock music to start gaining fans in Afghanistan, where 64 percent of the 31.8 million population is under age 25.

Robin Ryczek, a classically trained cellist from the United States, noticed the allure when she started teaching music at an established school in Kabul. Many of her students asked about learning rock and roll, even though it wasn’t part of the school’s curriculum.

She and Zadran, who met through the music community, decided to oblige the students on an informal basis.

“Three years ago when the rock scene in Kabul just started brewing, a group of young guys started to show up at our house to learn chords, scales and licks from our musician friends and Robin,” Zadran recalled. “That’s where the idea of opening up a rock school came up.”

The two started providing lessons, with friends volunteering as teachers, in a café Zadran owned called “The Venue.” They built a stage in the restaurant for small performances and jam sessions. 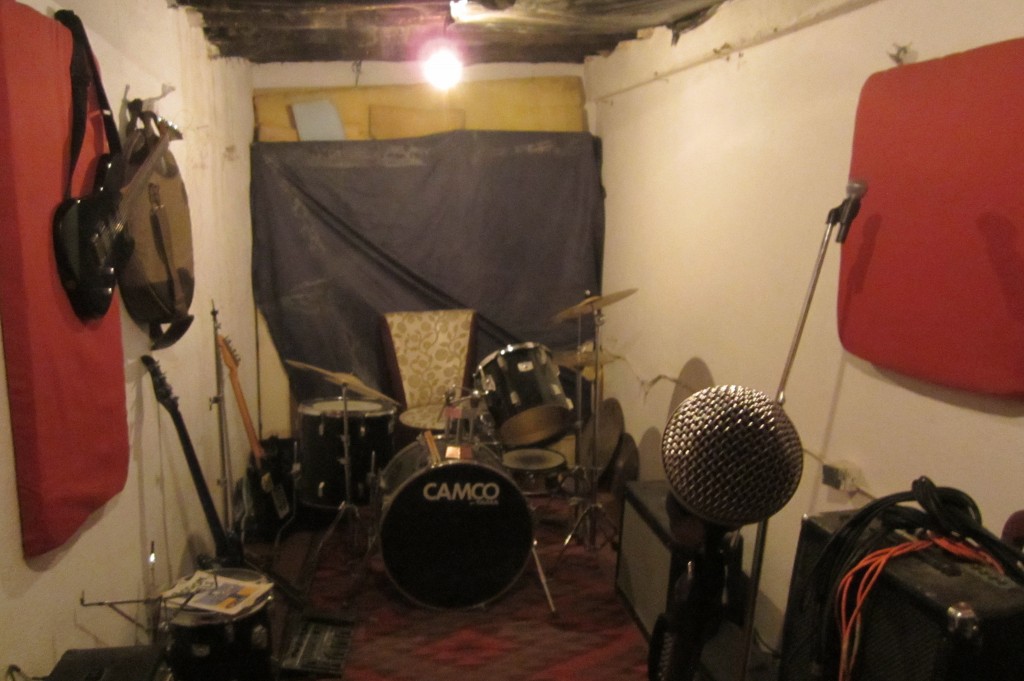 A converted room in a restaurant in Kabul serves as a studio for performers-in-training. Photo courtesy of Sound Studies Projects

Word spread about the new Rock School Kabul, operated by the non-profit Sound Studies Projects, and it now has about 35 students, both male and female, ranging in age from 4 to 40. In addition to teaching music, the school aims to provide a safe place for people of all cultural and economic backgrounds to express themselves.

Although rock and roll appears to be gaining popularity in Afghanistan, its acceptance isn’t widespread yet.

“Students are nervous carrying instruments on the street,” where they might be harassed, said Michael Lewis, the 38-year-old lead guitarist in the Portland, Ore., band Blue Skies for Black Hearts. He was one of the guest musicians who taught at Rock School Kabul in November 2013 (read more about his experiences), and he intends to go back this spring.

“The Taliban are not sitting in Kabul, but the students have families who may or may not understand what they’re doing,” he said.

But appreciation of contemporary music is changing. When the Taliban were toppled in 2001, many people returned to Afghanistan from countries like Iran, Pakistan and Uzbekistan, where they were exposed to rock and roll, said Zadran. Among that segment of society, the concept of rocking out on a guitar is more familiar and palatable. “Those are the people who come out to our concerts, and send their friends and family to the rock school,” he said.

The students pay the equivalent of $50 for four individual lessons per month at Rock School Kabul. Donations help pay the way for those who can’t afford it. The students also get access to the school at any time to practice, and once a week they can join an ensemble to play with other students.

The school benefits from visiting professional musicians like Lewis, who volunteer their time as teachers. It also is dependent on donations for supplies. Guest teachers help raise money in the United States and elsewhere to purchase instruments and music-editing software to send to the Kabul school. The Sound Studies Projects’ website thanks specific donors for items such as a mini-guitar, sheet music and “for leaving your ukulele with us!”

Another Portland-based singer, songwriter and guitarist Jerry Joseph, who is traveling to Afghanistan for the first time in mid-May to teach at the school with Lewis, said the music-editing software in particular is key to the students making music a profession.

Joseph, 52, recalled meeting a singer at a nightclub in Malaysia, and was wowed that the young man had sold 3 million copies online of a ballad he had composed. The same thing is possible for the Afghan students, said Joseph. “It could be sugary pop hits that make them a ton of money. It’s really kind of exciting,” he said. “The world is available to you on your device. There are more places [the music] can go.

Joseph said he and Lewis were waiting until after Saturday’s national elections to travel to Afghanistan for security reasons. Taliban militants have been blamed for scattered attacks and kidnappings leading up to the presidential vote.

The school itself had to close its doors temporarily for the safety of the students, said Zadran. But they did manage to pull off a pre-election concert with musicians from Afghanistan, Pakistan and India. Their message: “Vote for Peace.”

Rock School Kabul students talk about why they take lessons there.