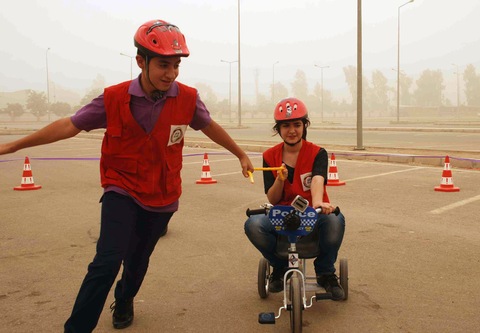 You don’t often hear “reality show” and “Iraq” in the same sentence. But one that takes place in the Middle Eastern country is aimed at promoting diversity and peacekeeping among youth.

The TV show, called “Salam Shabab” — or “peace youth” in Arabic — pits teams against each other in a series of challenges from filmmaking to broom ball. The teams are made up of three contestants each, ages 14-18, male and female, Sunni and Shia, all working together toward a common purpose: to become “ambassadors of peace” and win a prize. 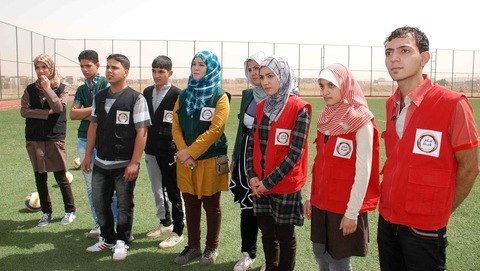 Theo Dolan, senior program officer for the U.S. Institute of Peace’s Center of Innovation for Media, Conflict and Peacebuilding, said the agency worked with its partners in Iraq to come up with the educational goals behind the TV show.

The show’s conflict-resolving mission has its work cut out for it. Violence in Iraq is on an upswing with the worst sectarian fighting seen this year since 2008. According to the U.N. mission in Iraq, more than 5,000 people have died since a deadly crackdown on a Sunni protest camp by the Shiite-led government in April.

“The timing of this program from its inception to now hasn’t lost any importance,” said Dolan.

Hussam Hadi, general manager for Baghdad-based Magic Carpet for Media Production, which produces the show, has had his own experiences with violence. He left the country in 2006, during the last surge in sectarian violence, and now lives in Amman, Jordan. But he felt it was worthwhile to return periodically to work on a show like Salam Shabab.

“To be engaged in peace efforts, especially for Iraq, was very important to me,” he said. The age bracket of the contestants, 14-18, is an important target group, he said, “because they will have the opportunity to vote in the near future, so it’s good they learn how to be responsible and engaged.”

It wasn’t easy to produce the show, which begins its third season on Saturday. The security situation in Iraq made choosing locations difficult, said Hadi. And in a conservative culture, it was sometimes hard to get the families — especially of the girls — on board. “But we encouraged them. It took some time, but they eventually let the girls participate,” he said.

An 8-minute video shows some of the activity challenges from Season 1 and the reasons why some of the Iraqi youth wanted to get involved. For security reasons, the show gives the contestants’ first names only.

Nareen, who is now 19 and studying law, was a contestant in Season 1 when she was 16 years old. Rather than needing to convince her family to join, however, she was recruited by an uncle working on the show to participate just three days before taping started when another contestant dropped out at the last minute.

“I didn’t know what was going on,” she recalled recently. “It had many surprises.”

But they were good ones. Going into the show, Nareen, who is from Erbil in northern Iraq, said she didn’t think things could change through young people. But she soon became impressed with the determination of the other contestants to better their lives. “They wanted to live with dignity. All they wanted was a little peace.”

Of course, the show brought out the teenagers’ competitive sides. There were some squabbles and sore losers, said Dolan. “But we didn’t have any instances where the Sunni or Shia said they wouldn’t be on the same team. That’s a credit to them. Some had preconceived notions about each other, but they gradually overcame them.” 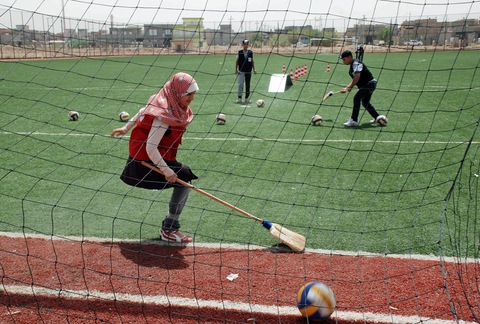 Broom ball was one of the sports challenges.

Another issue was the gender divide in a country where schools are segregated. “You had to be careful particularly about the sports challenge, because there couldn’t be any physical contact between the boys and girls,” Dolan said.

But when they would win, “it was fascinating to see how they would congratulate each other,” he continued. Because teammates of different genders couldn’t hug each other, they would try to figure out other ways to celebrate like high-fiving — “just as kids anywhere would,” he said.

The prizes have gotten larger each year. In Season 1, the winning contestants won a camera. In Season 2, they got a camera and a laptop to stay in touch with each other. And in Season 3, the top team gets a mini-grant to organize peacebuilding project in their own community. 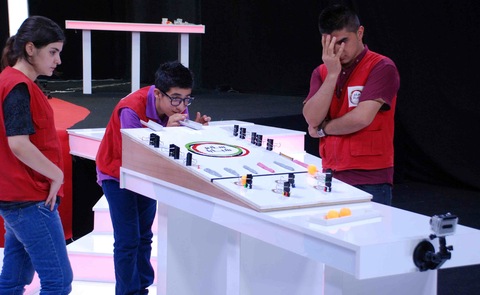 The program has received funding from the U.S. State Department for three seasons and is aired on Alhurra-Iraq, a U.S.-funded Arabic-language satellite TV channel. Dolan said the show will continue if it can get more funding.

Because Iraq doesn’t have reliable TV ratings, a research group was hired to do surveys and focus groups to measure young Iraqis’ attitudes before and after watching the show. The hope is viewers — not just participants — will gain a new appreciation for others’ differences, said Dolan.

An unofficial indicator of interest is Salam Shabab’s Facebook page, which now has more than 34,000 “likes” from the online community.

“In a country which still has electricity blackouts and low Internet penetration rates, having that many ‘likes’ on the Facebook page is pretty good,” he said.