The two girls who were sitting on either side of education advocate Malala Yousafzai when a Taliban gunman boarded their school bus in 2012 and tried to kill her, are now working side-by-side with her again to tout an equal education for all girls and boys.

Shazia Ramzan, 16, and Kainat Riaz, 17, are two of the 500 “global youth ambassadors” advocating for an international campaign to enroll 57 million children in primary school by the end of 2015 — the target date of the U.N. Millennium Development Goals. 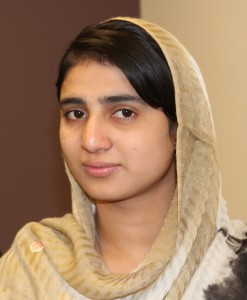 Shazia Ramzan, 16, from Swat Valley in Pakistan, overcame injuries to become an advocate of global education. Photo by Larisa Epatko

During a visit to Washington, D.C., at the launch of the global youth ambassador program, they both said that even when the Taliban had taken over their hometown of Mingora, the scenic capital of the mountainous Swat Valley in northwestern Pakistan, they knew education for girls was their right.

“When the Taliban came to Swat, girls were not allowed to go outside, to the shopping mall, or school,” said Ramzan. “But we said no, this is our right and we must continue our studies.”

The girls’ teachers and principal agreed, but cautioned them not to wear their uniforms to school or they would draw attention.

They also told the young students, “’You have to cover your books with your scarf,’ like the one I’m wearing, ‘because it is dangerous,’” said Ramzan. “When you go to school without your uniform and you don’t bring your bag, you don’t feel like it’s school.”

Their families and others were evacuated from Mingora for several months in 2009, while the Pakistani military flushed out the Taliban. When the girls returned three months later, they continued going to school with little thought of the Taliban or anyone else wanting to do them harm. 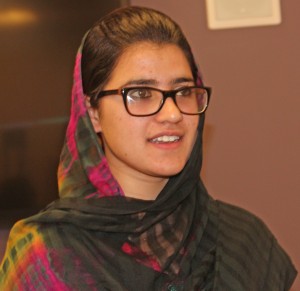 Kainat Riaz, 17, is one of the global youth ambassadors working to promote education for all girls and boys. Photo by Larisa Epatko

Riaz remembered the day of the attack on her school bus. She had told her mother the night before that she wasn’t feeling well and felt unprepared for an upcoming exam. She went to school anyway, and on the ride home, the man boarded the school bus and shot Yousafzai in the head and neck, Ramzan in her left hand and shoulder, and Riaz in her upper right arm.

While her friend, Yousafzai, was recovering at a hospital in England, there was a bombing behind Riaz’s home. This time, her neighbors said, “Kainat, you are very dangerous, please go away. This is very dangerous for you and for us.”

She and Ramzan got scholarships to attend an international school in Wales, where the principal said he and his staff had heard about the girls and wanted to help. They are both studying to become doctors and plan to return to Pakistan.

Riaz said she wants to go back to her hometown of Mingora, because there are only male doctors and she would like to be the first female doctor.

“In my city, some people don’t know education is important, but one day they will know, inshallah (God willing),” she said.

Left: Students attend a school run by the Citizens Foundation in the area of Qayyumabad in Karachi, Pakistan. Photo by Larisa Epatko