Scots wake up to ‘no’ vote victory

Updated at 3:30 a.m. EDT Friday | Scots voted to stay in the union with England, following Thursday’s historic referendum. The results showed 55 percent voting against independence to 45 percent in favor of a free Scotland.

After two years of intense campaigning, it all came down to this on Thursday: a “yes” or “no” vote on whether Scotland should become an independent state.

If the referendum passes, Scotland will become independent for the first time in more than 300 years. Scotland was sovereign prior to 1707, but the parliaments of England and Scotland at that time voted to unify and become the Kingdom of Great Britain.

Vote tallies will trickle in throughout the night, and by the time Scots eat their breakfast on Friday, they’ll know the final results.

A day before Scotland’s vote for independence, it was still unclear whether 4 million projected voters would decide to stay with the United Kingdom or break away.

“We’ve never seen anything like this. It’s just a yes and a no on the ballot. It’s not a vote for any political party. It’s a simple question,” said Greg Russell, a freelance broadcaster and journalist based in the capital Edinburgh. 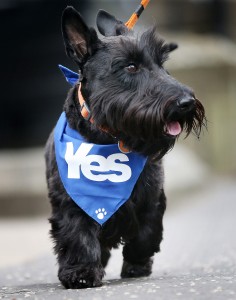 A dog wearing a pro-independence “yes” bandana is walked on a street in Glasgow, Scotland on Thursday. Scots began voting at 7 a.m. on whether to become an independent country. Photo by Ian MacNicol/AFP/Getty Images

Russell visited polling stations throughout the day, and saw just a portion of the 4 million eligible voters.

A woman in her 20s was baffled by the economic arguments, he said, but she felt that decisions made in London were far too removed from the people of Scotland, so she voted yes.

A man in his 70s was concerned about uncertainty over the currency and pensions. “He wanted to make sure he and his wife would be looked after in their old age and would have the money coming in that they expected,” so he voted no, said Russell.

A woman he spoke with from the Highlands region, a “hotbed of nationalist support,” said she was voting yes for historical reasons. “We’d been waiting a long time for this and we deserve it,” she told him.

Some were voting for the first time. The eligible age to vote was lowered to 16 from 18. Russell said he heard two teenage girls talking about Scotland’s GDP. “It’s just been amazing,” he said.

High schools hosted politicians on both sides to help inform their students, and the students held referendum debates. “It really has engaged the younger voters,” and likely will influence their thinking about politics for years to come, Russell said.

If the vote goes for independence, nothing will change right away. There will be 18 months of negotiations, such as over the currency Scotland will use, before final independence. If there is a no vote, British Prime Minister David Cameron has pledged to increase the powers of the Scottish government. But misgivings within his own party make that less of a done deal, said Russell. “He could have a back-bench rebellion on his hands.”

But for now, Scots will have to wait and see how a majority of their countrymen have voted.

“Tomorrow, those of us who will be lucky enough to sleep (tonight) will wake up to find out we’re either about to become an independent country or we’re staying within the union,” he said. As one politician put it at a rally, it’s the “choice of their lifetime.”

Related Resources: To learn more about the Scottish referendum, you can read our backgrounder or watch this tongue-in-cheek take from “Last Week Tonight with John Oliver”:

Left: Jock Robertson, 81, said, "I have waited all my life for this vote," outside of a polling station in Peebles, Scotland. After months of campaigning, the people of Scotland got to decide the fate of their homeland on Thursday. Photo by Christopher Furlong/Getty Images