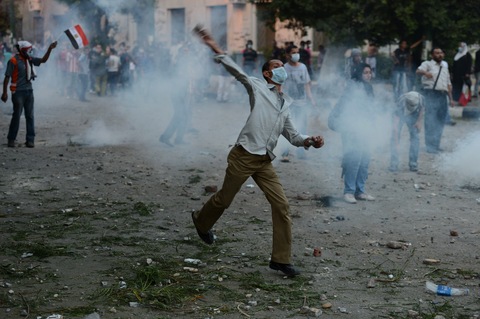 Egyptian protesters throw rocks at police near the U.S. Embassy in Cairo on Thursday. Photo by Khaled Desouki/AFP/Getty Images.

For a third day, demonstrators enraged by an anti-Islamic film tried to break into U.S. embassies — this time in Yemen and Egypt — but the results weren’t nearly as catastrophic as what unfolded at the consulate in Benghazi, Libya.

That’s because the buildings are more fortified than the temporary structure in Benghazi, and have security measures that were put in place after the 1983 bombing of the U.S. Embassy in Beirut, Lebanon, said Scott Stewart, vice president of analysis at Stratfor and a special agent with the State Department from 1988 to 1998. 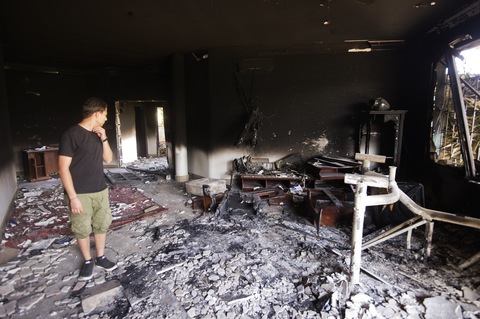 We asked Stewart about the safety of embassies and who’s responsible for protecting them (answers edited for clarity and length):

What made the consulate office in Benghazi more vulnerable than the embassy in Tripoli?

The embassy in Tripoli is a fairly new facility. It was constructed in 2009 in accordance with security standards established by the Diplomatic Security Service at the State Department. The building in Benghazi was basically a villa that was being rented to serve as a temporary consulate. So it was built in accordance with your normal residential security standards for Libya. It was not made to withstand rocket or bomb attacks. So it was not a very secure facility at all.

How can any building be protected against rocket-propelled grenades?

Inman facilities are designed and engineered and constructed to withstand attacks from weapons like rocket-propelled grenades. (The Inman Commission was established in 1985 after the U.S. Embassy bombings in Beirut, Lebanon, to develop new security standards.) There are certain thicknesses of the walls and certain types of reinforced concrete, certain angles that the walls have, and distance to the street that make them much more difficult to attack. The embassy in Tripoli, Libya, and the one in Sanaa, Yemen, which was just attacked today, are Inman facilities, so it’s going to be much more difficult to damage them.

Who’s responsible for security at an embassy — the host country or the embassy itself?

There’s a dual responsibility. Under the Vienna Convention on Diplomatic Relations, the host country is responsible for security of embassies. However, experience has taught the Americans that they can’t rely on the host country to do that. They’ve experienced big losses in places like Kuwait, and Beirut a couple of times, even in Islamabad, Pakistan, when it was burnt to the ground. So they’ve learned they need to establish their own security bureaucracy to take care of that, and the Diplomatic Security Service (or law enforcement arm of the State Department) came into being in the mid-1980s.

What can be done to step up security at U.S. embassies?

One of the things you can do is draw down on personnel, which is what they did in Libya. They had an ordered departure, where they had nonessential personnel, family members and dependents evacuated from the country. The other thing is to draw down American personnel from vulnerable facilities like Benghazi and leave the local personnel in charge of the facility to conduct business because they are less of a target. They can increase the local police and military presence outside the perimeter. They can also bring in additional Marines like they have done now in Tripoli.

Which embassies have a Marine presence?

It’s usually at the larger facilities, like Sanaa, Yemen, and Cairo, Egypt. At the smaller consulates and sometimes at smaller embassies, you don’t have Marines stationed there. It depends on the post, the number of Americans there and the amount of classified information that needs to be protected. And sometimes even the political sensibilities of the country.

Which embassies are most at risk of attacks?

The State Department looks at that carefully. When you look at the profile of what happened in Benghazi, it was a recently established facility in a place where the bureaucracy hadn’t caught up with it yet. So Congress hadn’t appropriated money and the Bureau of Overseas Buildings Operations didn’t have the opportunity to really plan and build a new facility there that meets security specifications. Anytime you have a new embassy in that kind of situation, you don’t really have any real security. Places that are new, like in South Sudan, which is a new country, might have issues. A well-established facility in the Middle East can be attacked — as we’ve seen in Cairo and Sanaa — but when it’s a well-built, well-fortified structure, it’s much more difficult to impact.

Frederic Wehrey, a senior associate in the Middle East Program at the Carnegie Endowment for International Peace, and journalist Robin Wright talk about the developments in Libya and the small groups of extremists that are lashing out at the United States on Wednesday’s NewsHour: