Should refugees be allowed to work?

As the world debates what to do with the staggering number of refugees who have been dislodged from their normal lives, Uganda is an example of a country allowing displaced people to work.

Uganda has hosted refugees since the first influx of Rwandans in 1959, and now has more than 500,000 refugees from Rwanda, the Democratic Republic of Congo, Somalia, South Sudan and elsewhere, said Alexander Betts, a professor of forced migration and international affairs at Oxford University.

Uganda “quickly recognized that, with large amounts of unoccupied arable land, it could benefit from allowing refugees the right to work in under-populated rural areas.”

The refugees work as farmers, taxi drivers and run Internet cafes. They generally do not need formal work permits, and their refugee status documents entitle them to work, he said.

“From Kenya to Uganda to Tanzania to Thailand, in all of these contexts, we see refugees helping themselves and their communities when they’re given opportunities,” Betts told PBS NewsHour special correspondent Fred de Sam Lazaro in an April interview.

In Uganda’s capital Kampala, 20 percent of refugee-owned businesses have at least one employee. Of those employed, 40 percent are citizens of the host country, said Betts. (Read more of his research.)

“These (refugees) are often people with skills, talents, aspirations,” he said. “If we don’t recognize their skills, if we don’t give them the training opportunities, if we don’t offer them the right to work, they end up appearing to be a burden.”

But in places like Lebanon, the refugees could flood the job market. Lebanon has a population of 4 million and is hosting about 1.2 million refugees.

“Out of every four Lebanese, one is Syrian,” Antoine Frem, mayor of the coastal city of Jounieh in Lebanon, said in September at the U.S. Institute of Peace. (You can watch his full presentation.)

The Lebanese government is struggling to balance the needs of employers looking for workers and Lebanese citizens with whom the refugees are competing for jobs. 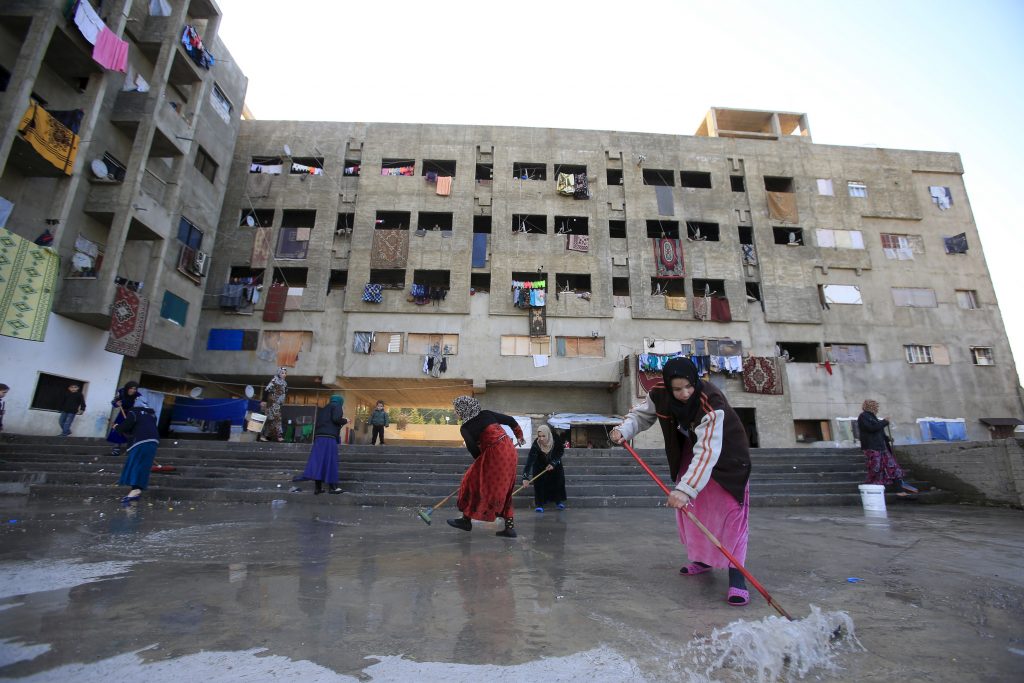 Women scrub the sidewalk outside a compound housing Syrian refugees in Sidon, southern Lebanon on Feb. 3. Photo by Ali Hashisho/Reuters

In Lebanon, private companies can hire documented refugees. “All the construction sites have Syrian workers,” said Frem. But state-run institutions, such as public schools, cannot hire refugees because they are not enrolled in the Social Security and national benefits system, he said.

“The Syrian refugees are replacing the Lebanese workforce in many places. You go to restaurants now, and the waiter serving you has a Syrian accent,” said Frem. “This is creating a job loss for Lebanese. And many of the Lebanese now, especially the talented ones, are emigrating.”

In other countries, such as in Europe nations, which have much fewer refugees, people are wary of the newcomers for other reasons, said Betts.

“There’s a lot of fear from people who don’t necessarily meet refugees in their day-to-day life, but who read newspaper stories and end up with … a fear of foreigners, a fear of the unknown,” he said.

See all of the PBS NewsHour’s coverage of the migrant crisis.

Left: In Uganda, where refugees are allowed to work, a man started a community radio station in one of the refugee camps. This man is listening to election results in February in Uganda's capital Kampala. Photo by James Akena/Reuters