With the number of detainees at the U.S. naval station at Guantanamo Bay, Cuba, steadily shrinking, military personnel there say the release of the prisoners is having a positive impact on those who remain.

The Obama administration has made it a goal to close the prison, though the base itself would remain open. Currently, 180 detainees are at the site. The White House has selected an alternate location — an underused state prison in Thomson, Ill., about 50 miles west of Chicago — but Congress has yet to appropriate the funds for the federal acquisition of the site. 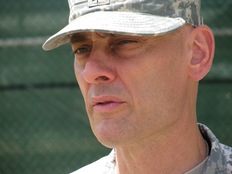 Detainees who leave Guantanamo are either transferred to detention facilities in other countries or released overseas. When a prisoner leaves, the military posts a notice in a common area where other inmates can see it.

“There’s no question that that has a positive impact, because they can see that some of their fellow detainees are leaving,” said Lt. Col. Andrew McManus, deputy commander of the Joint Detention Group, which oversees operations at the detention camps.

Also improving the prisoners’ behavior is the enticement of living in the communal camps. January was the last large-scale detainee protest that involved assault, said McManus, who attributed the change to the updated benefits they receive in the compliant part of the camp. 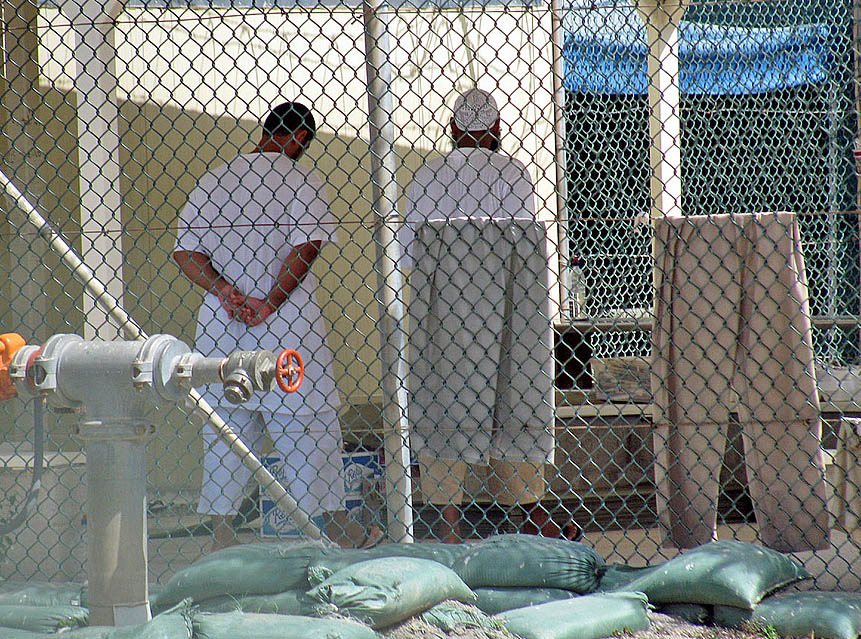 Those benefits include being able to participate in classroom activities, such as computer training, and play video games on Playstation and Nintendo DS. The detainees also can watch television, including news channels Al Jazeera English and Kuwait 3 plus sports and nature shows, McManus said. One of their favorites is the Alaskan fishing show the “Deadliest Catch.”

Things weren’t always so rosy. In the early years of the detainees’ confinement at Guantanamo, a leaked International Committee of the Red Cross report noted potential violations of international law, including allegations of physical torture, which the Pentagon denied. 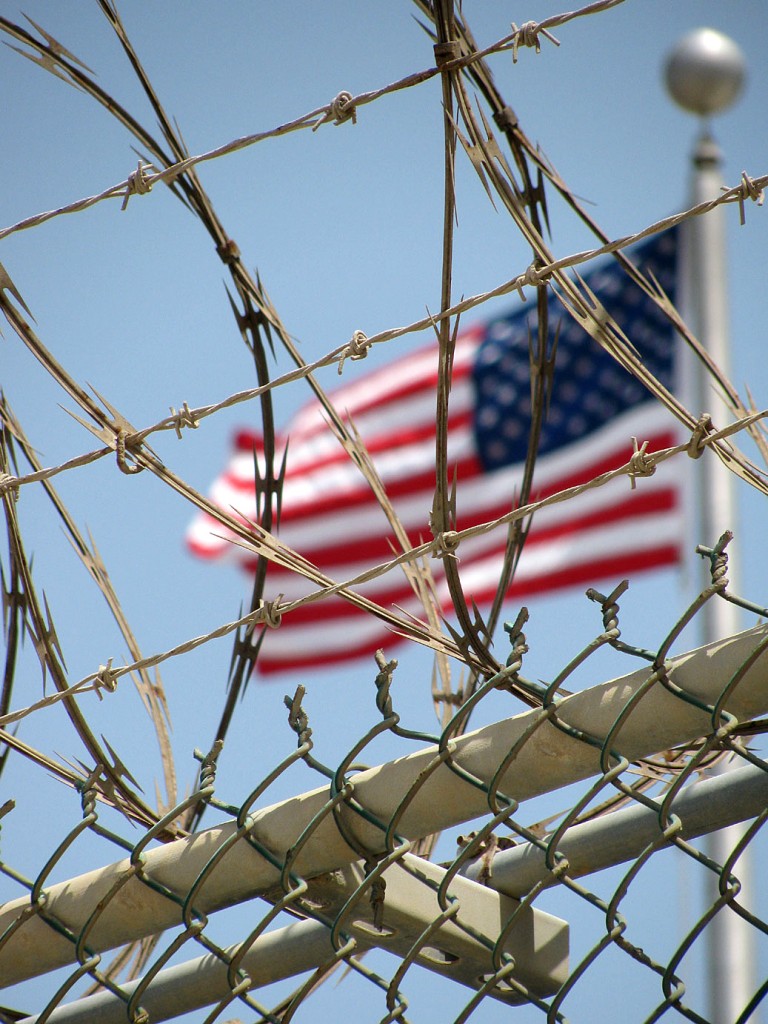 An American flag flies over the detention facility at Guantanamo Bay, Cuba. Photo by Larisa Epatko

Conditions began improving in 2006, though advocacy groups such as Human Rights Watch still expressed concern over the detainees’ extended periods alone. More recently, however, there have been “massive improvements,” said the group’s Terrorism and Counterterrorism Program senior counsel Andrea Prasow.

Most of the detainees are in the communal living area and they have access to recreation areas for 20 hours a day, along with classes to learn English and Arabic, life skills and art, she said.

Listen to a Guantanamo camp officer describe the facilities. 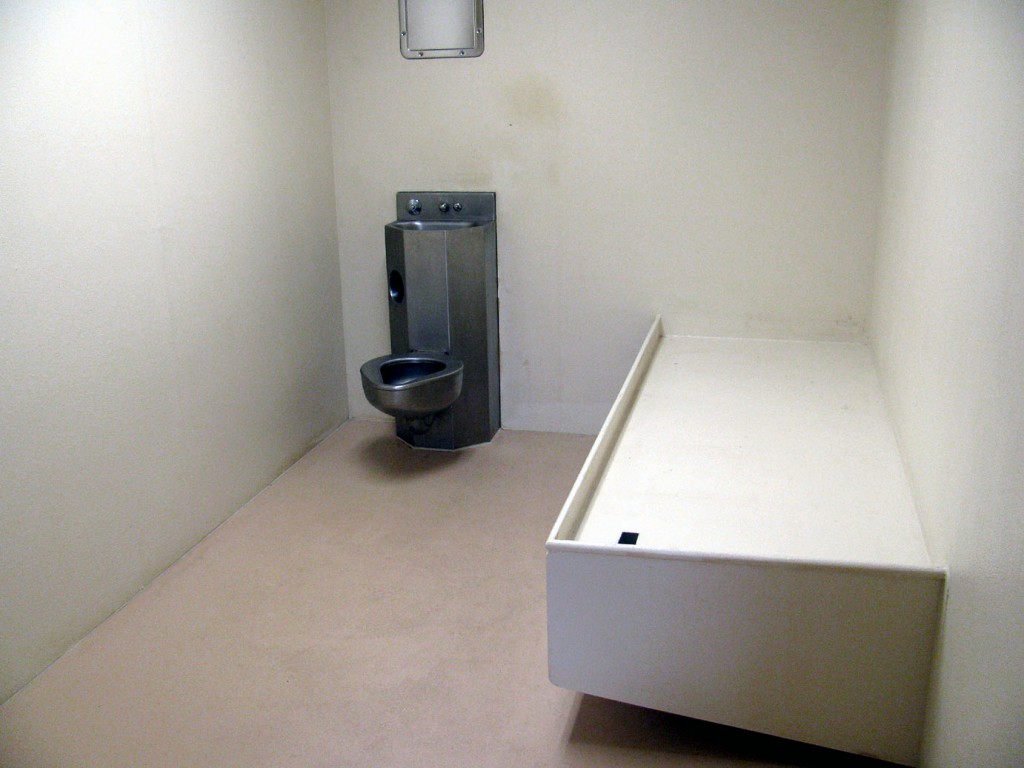 In the compliant camps, prisoners are locked in their cells from midnight to 4 a.m. but can walk around the communal areas at all other times. Photo by Larisa Epatko 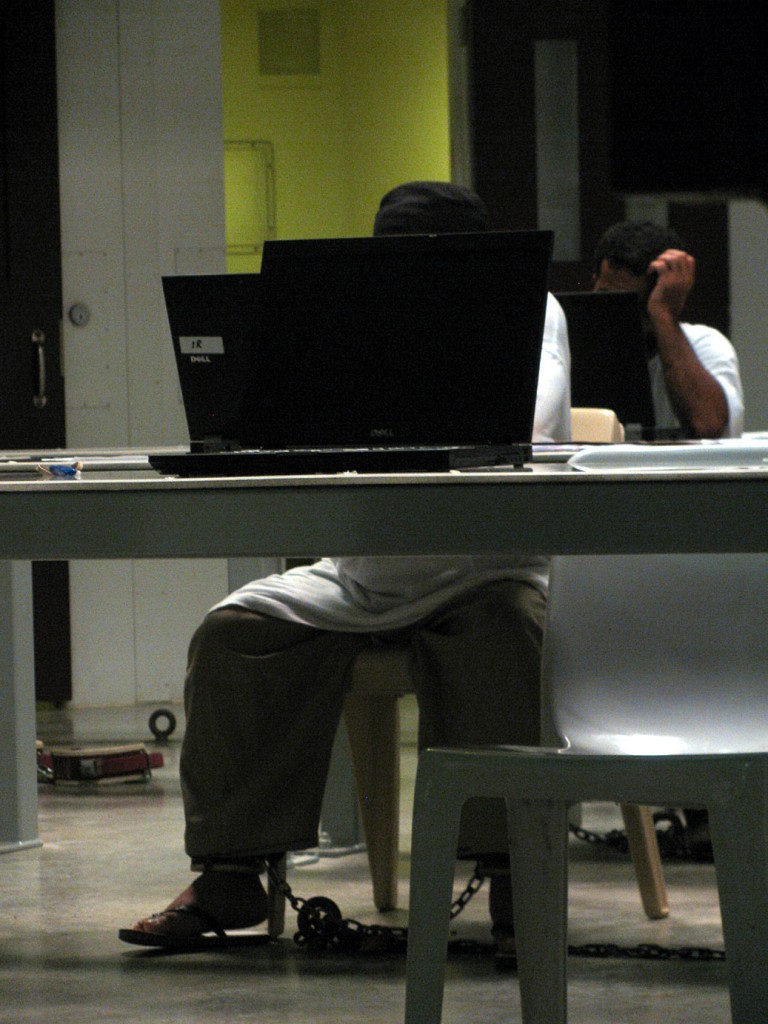 Detainees can sign up for computer classes, along with art and resume writing. Photo by Larisa Epatko 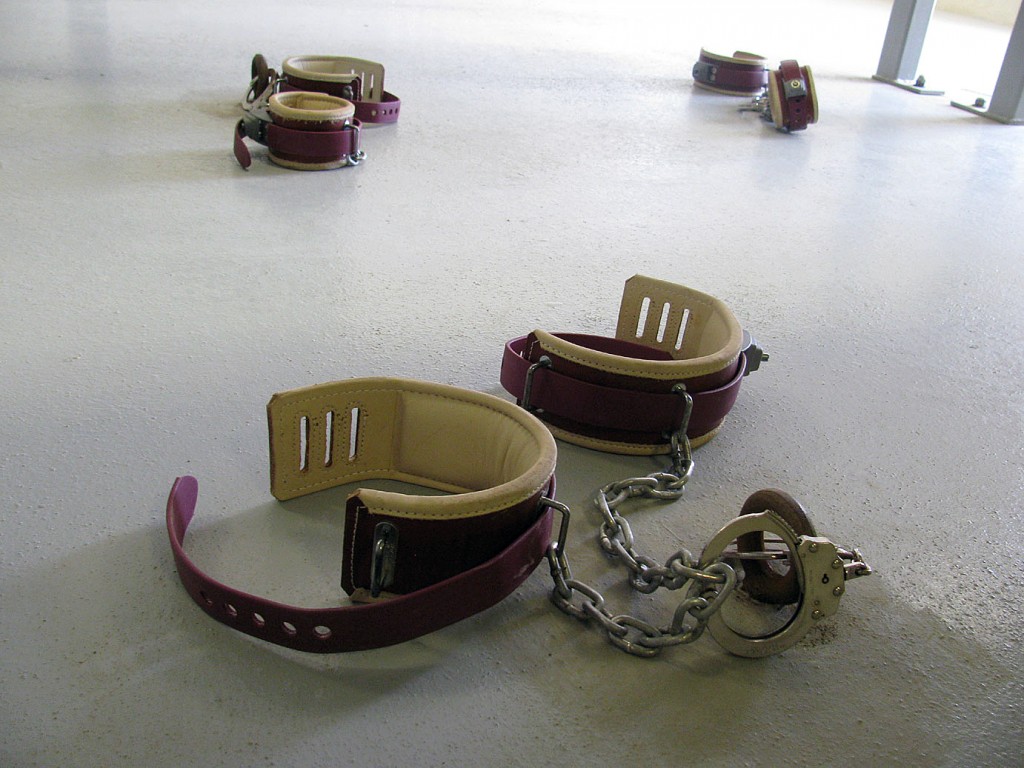 Shackles line the floor of a classroom at Guantanamo. Photo by Larisa Epatko 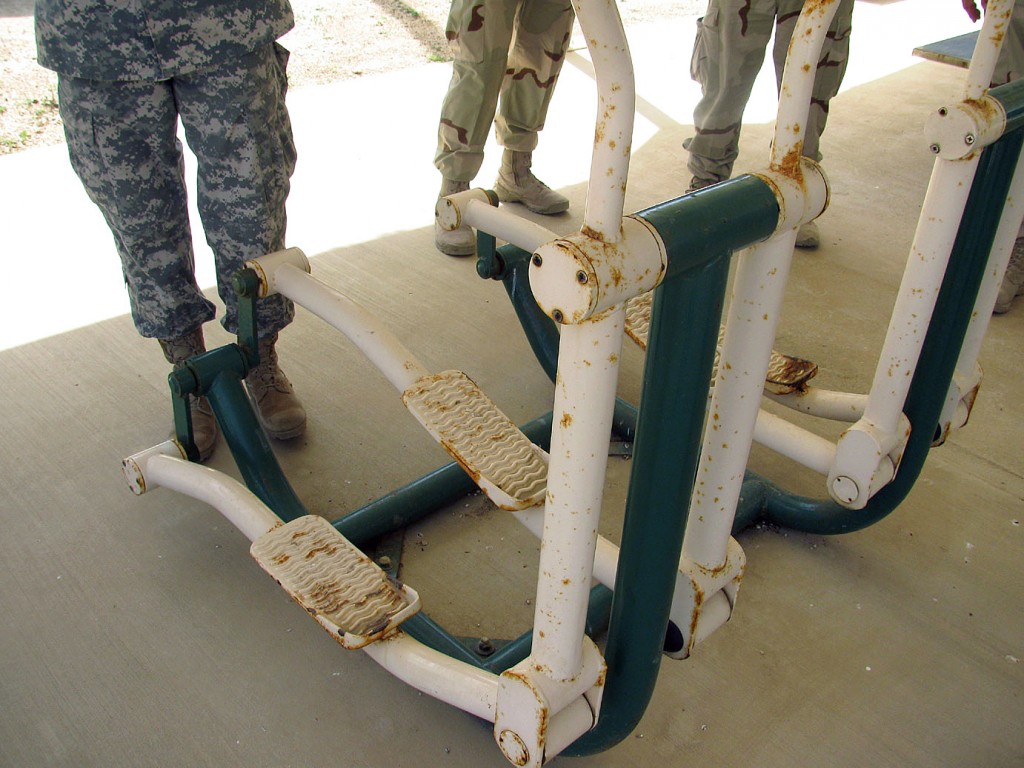 Detainees can play soccer and use exercise machines in the recreation area. Photo by Larisa Epatko 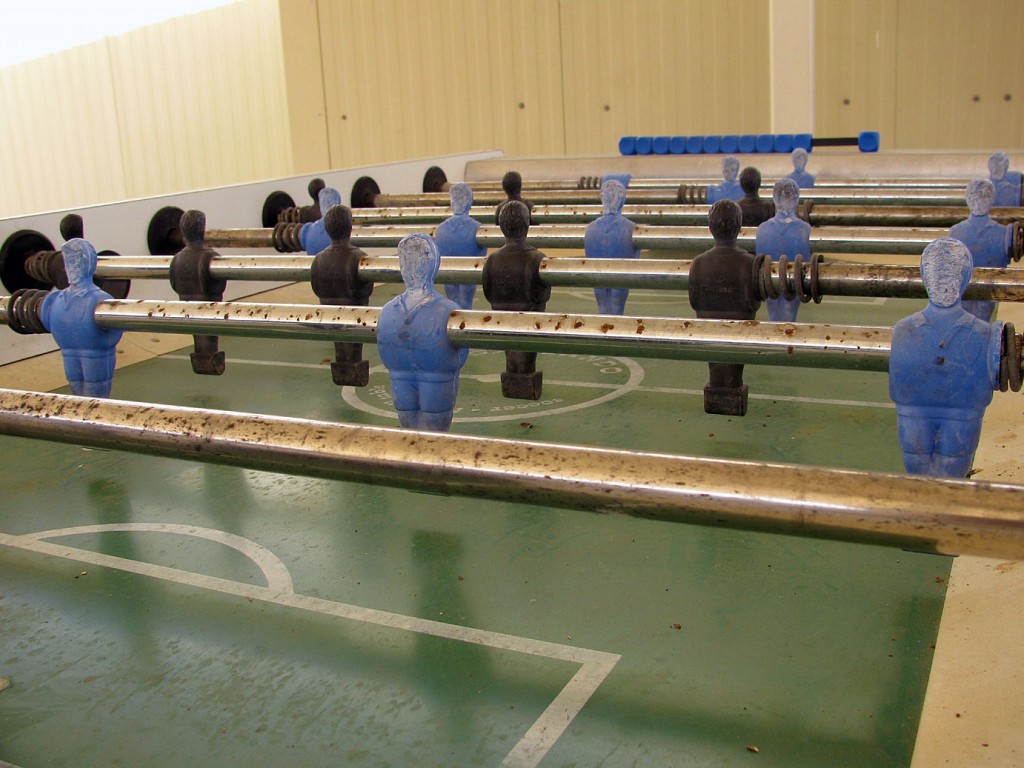 The military shaved the faces off the foosball players at the request of the detainees, who thought they looked “too Western.” Photo by Larisa Epatko 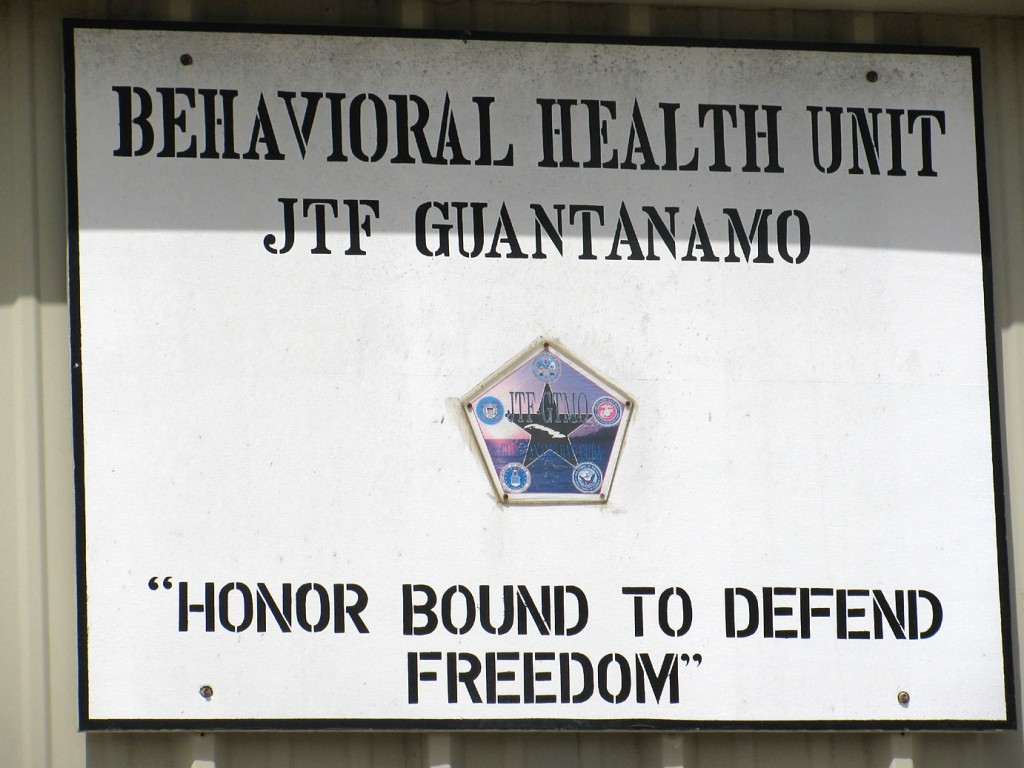 Left: A guard looks over the courtyard in the U.S. prison at Guantanamo Bay, Cuba. Photo by Larisa Epatko