Sudan Envoy: Nuba Mountains Not in Danger of Becoming Another Darfur

Princeton Lyman, U.S. envoy for Sudan, told Margaret Warner this week that the Nuba Mountain region in Southern Kordofan, where Northern forces have moved in and many residents have fled, is not in danger of becoming another Darfur. 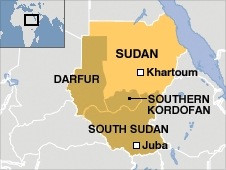 “The Nuba Mountain people are fighting back and I don’t think the North is capable of dislodging large numbers of people on an ethnic basis from the Nuba Mountains,” he said. “Second, I’m not sure that’s the objective of the government, though local commanders may have a different point of view.”

Watch their web-only conversation about the Nuba Mountain region, or read the transcript:

MARGARET WARNER: Do you think that the Nuba mountains conflict and the kind of ethnically targeted killings going on there has the potential to turn that into another Darfur, a new Darfur?

PRINCETON LYMAN: I don’t think so for two reasons. One because the Nuba Mountain people are fighting back and I don’t think the North is capable of dislodging large numbers of people on an ethnic basis from the Nuba Mountains. That’s the reality on the ground. Second, I’m not sure that’s the objective of the government though local commanders may have a different point of view.

PRINCETON LYMAN: Systematic ethnic cleansing. I do think that it’s clear that they wanted to establish military control over the area and to disarm or greatly restrict the armed capability of the Nuba Mountain people.

MARGARET WARNER: Would you say atrocities are occurring by the North Sudanese forces against civilians there?

PRINCETON LYMAN: We certainly have reports of that. Because we don’t have a presence there, we haven’t been able to investigate it fully. There are certainly reports of targeted killings. There are some reports from the other side also. What we’ve asked for is a full investigation.

MARGARET WARNER: By whom?

PRINCETON LYMAN: Well, by the U.N. would be the best. The U.N. presence has not been sufficient to get out and stop this or to investigate it.

PRINCETON LYMAN: We’ve heard that report and we’re looking into it. So far we have no evidence that the government of Sudan has chemical warfare capabilities. We’ve seen no evidence of it. But we got the reports and we’re having them checked out.

PRINCETON LYMAN: They have restricted them. They’ve arrested some U.N. staff, which we’re very concerned about. They’ve kept them from free movement. They haven’t attacked them but some of the bombings have been close to U.N. headquarters.

MARGARET WARNER: So what can the U.S. do?

PRINCETON LYMAN: We’re working with the parties, with the African Union, which is in charge of negotiations. Secretary [of State Hillary] Clinton called the chief negotiator for the government of Sudan to urge him to reach an agreement on a cessation of hostilities, to allow the U.N. to stay there as long as necessary, to make sure the agreement is implemented. I called all the key people on the southern side to go over this.

PRINCETON LYMAN: Oh, no, we have a lot of influence on both sides. And we’re exerting it to the best of our ability.

More of Lyman’s interview airs on Tuesday’s NewsHour. View all of our World coverage and follow us on Twitter.